The temperature in the city seems to be rising gradually over the last month. The trend is visible in the entire nation, not just limited to the city or state. While experts say that this has happened gradually over the years, Bangaloreans feel that it is rising at a more drastic pace.

Richa Anantha, a sales-woman, livng in Nagarbhavi, points that riders on the city roads can feel the sticky uncomfortable heat. The wind is not cooling. She feels that Bangalore is hotter than what it was last year. 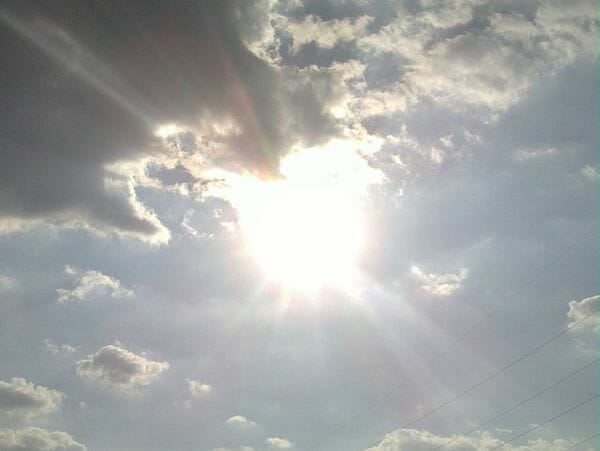 BV Khare, a Bangalore-based retired teacher, residing in Basaveshwaranagar, recalls that during the early 80’s, while the temperature would be around 30 degree Celsius in the afternoon, rainfall would occur in the evenings.

According to the officials from the Indian Meteorological Department, though the winter season ended in February, the city recorded a temperature two degree above normal, as opposed to the normal 30 degree Celsius for the month of February, for the year 2013. 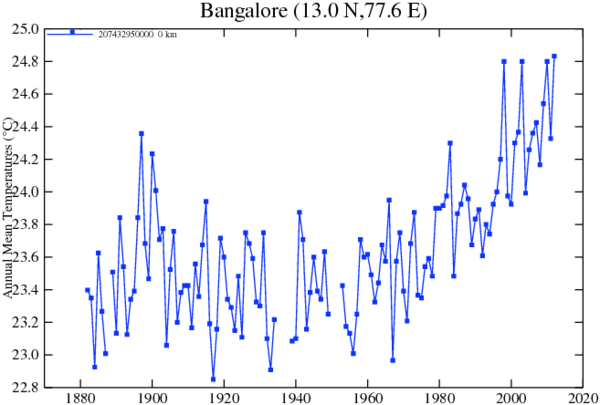 In the coming days, the city and the state are likely to experience high temperature, dry weather and less humidity. Temperatures are likely to dip only during April- May, when thunder activities will occur, until then it is unlikely for rainfall to occur.

It turns out that over the last century, between 1901 and 2000, minimum temperatures have been consistently rising in Bangalore at a rapid rate. However maximum temperatures (mysteriously) peaked in the 1920s and 30s, before falling again. They have been rising steadily ever since the 1940s.

Trends in minimum temperatures of individual months also indicate that December, February and March are warming faster than the other months.

Climate data strongly supports the notion that winter nights are getting significantly warmer in the city – with summer nights joining in.

The faster-than-global-average rise in minimum temperatures in Bangalore could indeed be because of urbanisation, land use change, and heat island effects. But one cannot conclude for certain by looking at this data alone. Also, the built up area near someone’s home could have increased, with a corresponding loss of vegetation. Data from a weather station in the central business district of Bangalore will never be able to tell us the effect of that.

Rapid urbanisation over centuries, rapid expansion of the city, increased presence of carbon-dioxide in the atmosphere, increasing pollution, heat islands and reduction in green cover, which ultimately lead to global warming, are the reasons for the weather change, according to Puttanna.

A study conducted by the Department of Agro-meteorology, University of Agricultural Sciences, Gandhi Krishi Vignana Kendra (GKVK) proves that there has been an increase in the summer trend. Professor and the head of the Department, Prof MB Raje Gowda said that before 1990s, temperatures would start rising from March 1. However, climate change has lead to the summer season beginning in the third week of February itself. Now the winter duration has reduced and summer duration has increased, thus the number of days with maximum temperature (36-37 degree Celsius) has increased as compared to earlier where it would be just for a day or two.

Sakshi, a young student , residing in Basaveshwaranagar, feels that the constant growth of the city causes the temperature to rise. The hotter it gets, more ACs are used, which in turn causes more heat with island effects and affects the ozone layer, which is a never-ending vicious circle.⊕

You can mark garbage dump spots in your neighbourhood using Google Maps with VOSD’s collaborative project, which tries to prove availability of garbage is the main influence of increasing stray dog population.

The Central government has submitted its plan to regulate the retail sale of acid, to the Supreme Court on Tuesday, 16 July 2013. In view of this, Citizen Matters reporter Bosky Khanna went on to do a reality check on the sale of acid in Bangalore. Here is what she got.