Malatesh Garadimani stands over the desk in Gallery No. 1, at Bangalore’s beacon of fine art – Chitrakala Parishath. His straight face doesn’t melt to my greeting smile, but instead exudes an intense self-belief. I am not as yet aware that he is a polio-victim who is being bolstered up by prosthetic apparatus. But, the infirmity of his lower limbs hasn’t stopped him from excelling with his upper ones. It is such self-empowerment that induced CKP alumni and art teacher at Bangalore’s Association of People with Disability – Shivubodha – to invite Malatesh into this prestigious space. After our introductions, I follow the latter’s pointed finger to his artwork on display. 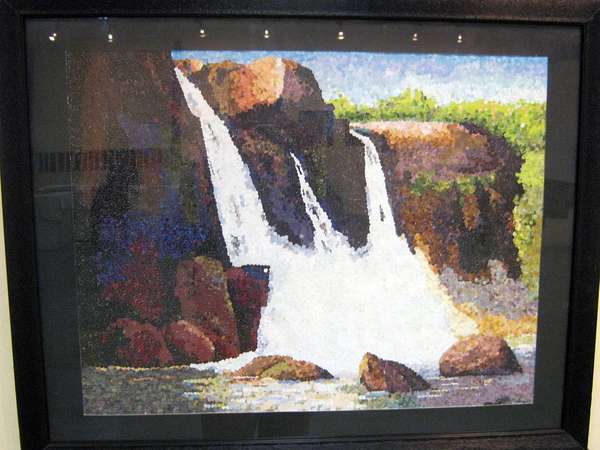 The textured colours and uneven sunlight on the rocks juxtaposed with glistening waterfalls, perfectly captured with bindis by the differently-abled artist Malatesh. Pic: Jatin Prabhu

At first, I am just impressed with his two water-fall themed landscapes. But as I draw closer, I’m astounded to see that Malatesh has actually created a whole image from a myriad small bindies. Indeed, the final product has been created by meticulously placing together thousands of the coloured dots to form a composite mosaic depiction of rocks, water, shrubbery and sky. Thankfully, such a painstakingly unique effort got the acknowledgement it deserved, earning Malatesh Limca and World ‘Unique’ Records.

Not surprisingly however, this distinction is only one in a whole closetful of accolades that he has collected over the years. The 32-year-old Master in Fine Arts, hailing from Karnataka’s northern Haveri district, has won five events organized and sponsored by the Times Group. Malatesh has also ensnared Bahrain’s International Sartha Prize and three other national trophies. But his artwork speaks for itself, not least of all, his novel paintings of the Buddha’s countenance. With rarified green acrylic, he has realized images of the guru in a novel symmetry, while effecting variations in hairstyle and facial decoration.

As I am almost lost in Malatesh’s offerings, something psychedelic catches my eye. I am captivated by a confluence of vibrant brushstrokes screaming out to me from their framed canvases. And in that elegant mix of glowing hues, I discern the scene of a water-body against the backdrop of a towering concrete skyline. 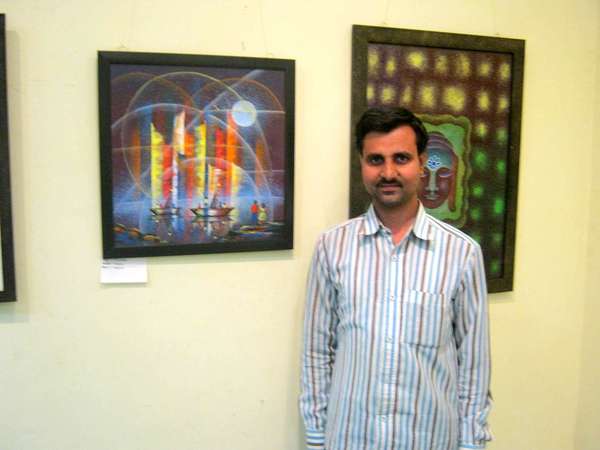 The buildings seem to shoot out like tall jagged shoots, each imbued in textured colour of transient light and shadow. Then one notices the lowly mid-ground of placid boats upon the water, partially concealing a mirrored reflection of the imposing skyscrapers. Finally, the eye is drawn to flat-land protrusions from the foreground of the water-body, bearing people who are overawed by the layered scenery that confronts them. I notice the artist’s name affixed to the frame – Raghavendra Talikoti and immediately walk up to him, extending a congratulatory hand.

After gracefully receiving it, he leads me around his other paintings. At first glance, they all look similar in as much as they all depict tall buildings reflected in an expanse of water on which boats sail. But then I recognize noticeable variations – the arrangement of colours is different, the sun in the sky glistens in silver, gold, orange and blue. There are even curved and straight beams of subtly-tinged light running across the skyline’s façade.

Art Teacher at Association for People with Disability – Mr Shivubodha – knows that the handicapped are flowers in bloom. Pic: Jatin Prabhu

Abstractionists may frown a little at Raghavendra’s minute attention to symmetry and sharp shapes, but the appealing precision in paisley design, is indisputable. Readily obliging my choice to converse in Hindi (owing to my challenged Kannada), Raghavendra explains."Maine ye sare paintings ek hi theme par kiya, kyoki mein apne liye ek trademark style banana chahta hoon. (I have based all my paintings around a theme since I want to define a trademark style for myself)" And it certainly looks like Raghavendra has brushed up a distinctive fine-art style of his own. He tells me that he hopes one day people will recognize his work simply by looking at it. 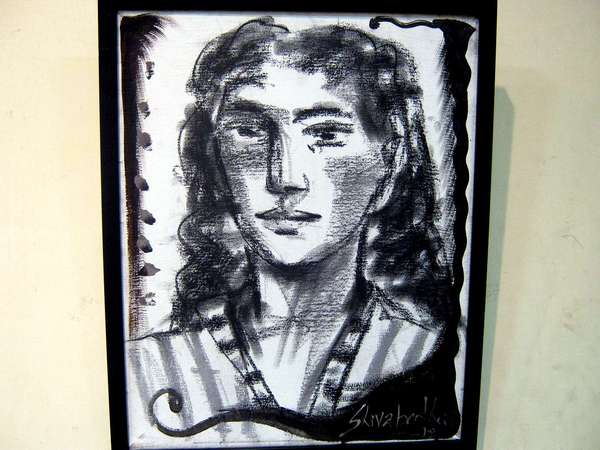 The versatile Shivubodha, captures an “imaginary” face of a disabled child, in charcoal. Pic: Jatin Prabhu

Some may say that that’s a lofty ambition for a boy from Uttar-Kannada’s modestly-developed Haveri district. But his background hasn’t impeded his artwork from going across borders – to exhibitions in Canada and Germany. His teenage years were studded with Camel Contest awards and he got to hone his artistic skill at Hubli’s Folklore University. Now, settled in Bangalore for the last decade, he’s determined to make that painter’s mark. And Chitrakala Parishath (CKP), where he has already held an earlier exhibition, is certainly one place where he is making an impression.

Shivubodha – the man who brought together the best offerings of Malatesh and Raghavendra at CKP – has contributed a few works of his own for the exhibition, too. His offerings present a recurring theme – of human disability. But the symbolic depictions conveying the message of our handicapped brethren finding their path to self-actualisation, are undeniably original. His first painting in the gallery’s line-up is an acrylic image of a tricycle which is stirring up energy circles from its wheels to spawn flowers. Shivubodha indicates to me that this is his vision of the evolution of creative process in disabled people. The black background and the colourful extensions emerging from it are a further indication of enlightenment springing forth from dark fate.

There is another of Shivu’s paintings showing similar beguiling complexities. But as variety defines the substance of any great artist, he now points to one of his portraits. It’s an exercise in charcoal, although Shivu claims that the subject is fictitious. "I didn’t draw that after any one in particular. Just from my own imagination. But it’s very strange, because one student says it is a picture of her!" A subliminal translation to art, perhaps.

Engaging creativity splashed across three walls is enough to make my Sunday afternoon. As I extend my final thoughts and best wishes to the creators, Raghavendra urges me to bring friends and family to the exhibition. "Mujhe achcha
lagta hai jab mere paintings dekhne se log khush ho jaate hein." (I feel good when I can make people happy from viewing my paintings).⊕

Dollu Kunita is a popular drum dance in karnataka, can it be used as a method for under privileged children to express themselves and gain confidence ?

Over 20 comic book artists participated in the event with close to 15 stalls. Art in Transit launched two anthologies by different artists: one about Bengaluru and the other about Cubbon Park.

Birds come in all sizes; Some of them are commonly seen in Bangalore, while some are rare. Here’s Deepa Mohan’s take on the winged beauties that are seen around us.