It has happened to every woman. You are filling a form for a bank account or a driver’s license or an internet connection. And the tip of your pen momentarily hovers over the section that stubbornly demands a ‘Father/Husband’s Name’. In nearly every form we fill, however irrelevant to the nature of application you are filling, this information is vital. You ignore the thought as if the field were a leering lout serenading you on the street with a song and comply to the necessary evils of paperwork. 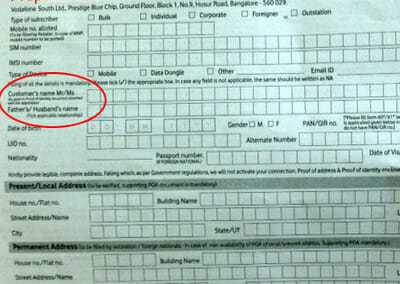 For the rare bubble of privilege some of us live in, raised as well as sons, earning as much as our male colleagues, it is understandably irksome to have to validate our identities via another person. It is not to our taste to be identified as a wife or a daughter where it is not warranted, but there are instances where doing so is inherently unjust and unfair to women who choose to not provide this information. When I sought stories and opinions on a social network on this subject, I got several email responses that highlight how paperwork prefers to slot us as primarily wives and daughters often denying us our positions as guardians.

Aparna Ramachandra, an entrepreneur, has a hard time when she has to fill forms for her son that always ask for a ‘father’s name’ never choosing to specify instead a gender neutral ‘guardian’. She often sees paperwork that makes no allowance for a single mother. She ran into trouble when applying for her son’s passport because authorities had trouble comprehending that she was the legal guardian. "I have my father’s surname and my son has my ex-husband’s surname. It was too much for the guys on the other side of the window" she says.

"Your baby was born after you were married, no?" Sapna Prabhakaran, a Marketing professional, was asked when she went to her local municipal office’s Health department to get her child’s birth certificate. The official in charge couldn’t see how her last name could be different from that of her newborn. Sapna had retained her maiden name whereas her child would take on her husband’s surname. This, to the Health department of Mumbai, was a "complex case".

In each instance all matters were to be settled either by repeated follow-ups, pleading or bizarre affidavits. The Indian passport application form reasonably asks for the names of both parents and the spouse’s name for all applicants. It also has a conditional section for name change post marriage, if applicable. And yet, women like Aparna are harassed by officials who either don’t know correct procedures or fear taking a call on an application with exceptions.

Nothing can be done, Shweta Baxi Tyagi, a Vice President with a Digital Media company, was told when she wanted her son’s Aadhaar card to carry her name, not her ex-husband’s, as the legal guardian. When she went back and showed them the rules mentioned online, the Aadhaar card was finally processed.

Aparna finds it particularly unpleasant when "details" are demanded of her circumstance, of the absence of a male, by people who refuse to accept forms without an undue explanation. All these women and countless others are independent successful professionals whom the paperwork in this country is too skeptical to accept as being responsible for their children.

It is not amusing that forms do not require men to list their spouses in official records but a woman is expected to fill her husband’s name in the place of her father-who the law for a minor counts as a ‘guardian’. The Hindu Minority and Guardian Act, 1956 specifies that for a minor child, the father is the natural guardian. This was challenged by Githa Hariharan in an 1995 petition to the Supreme Court and a consequent landmark verdict allowed a mother to be considered as natural guardian. A Planning Commission Working Group submitted a recommendation last year to make the mother the primary legal guardian in all official documents. The 1956 law curiously states that should a minor girl be married, then her husband is the natural guardian.

Yet, even adult women must specify the names of husbands in official documents. In these times, when women of great power with a global audience cautiously claim to not ‘consider themselves as feminists’ and when raising a voice against inequality can quickly earn one a charge of militancy, it seems unwise to protest such a thing. Is not a bit of paperwork a trifle against the larger crimes women suffer, you will ask. But how can our reality change without changing the comfortable imbalance of our words?

I went around Bangalore this morning, collecting forms from banks, looked up forms online and found forms for everyday things as cellphone connections. While a bank is required by international norms to gather family information, what place does a husband (or father’s) name have when applying for a cellphone connection?

It is fascinating how gently and widely patriarchy is promoted. It is as necessary to change the vocabulary of everyday existence as the hope of making an honest statement of being truly equal. Because when a piece of paper needs to know your ‘father or husband’s name’, what it really does, is refuse to let you pass until your name is accompanied by a man’s.

Patriarchy exerts a universal influence. It views us as eternal children, sons and daughters of our fathers, who are part of a continuous lineage, not people responsible and accountable only for and to themselves. Why must a woman preface her identity with a husband? And why must a grown man be known by his father in a context where the relationship is irrelevant?

A lady studying in a state-funded institution in Delhi, who wishes to remain anonymous, in order to apply for a fee waiver for a post-graduate program, was asked to sign an affidavit to cite that she was ‘legally estranged from her parents, particularly her father’ to prove to the institution that she was genuinely in need of tuition assistance. Public and private institutions, particularly educational ones will not hazard allowing young men and women to be dissociated from support systems.

It is a setting I am now fairly used to. It involves waiting in a small office full of bureaucratic bustle (or torpor). My afternoon is at the mercy of a middle-aged man at a table who creaks grudgingly into action, processing a fine or a form or a complaint. He will see that I am a harried-looking young girl and by way of making polite conversation, he will ask me ‘what’ my father "does".

I have learnt through red tape in university and in government offices that this seemingly innocuous question is the conduit to a larger image. Purely by the knowledge of my father’s profession or perceived income, a narrative will be constructed on my social, economic and sometimes political standing. A narrative I do not endorse or contribute to, but which will dictate every conversation between us hence.

In its own way, this is what paperwork patriarchy reflects. I stare at an application for a PAN card as it asks, simply, and stubbornly, for my father’s name. It does not offer an alternative, or doubt that my father, deceased for years now, should be relevant to this document at all. Every time a form confidently asks a woman for a "father’s name", it eschews the role of a female twice over. First, it eliminates the role of a woman who is a mother, and then it eliminates my role as an adult and an independent participant.

In a recent essay about gender sen
sitivity in a different context, the writer Roxane Gay says that diversity is not about quotas or political correctness. But about "putting multiple points of view in a conversation". She says "It’s about ensuring that no one is operating in the kind of cultural vacuum where they don’t stop to consider context". It is only fair to ask for our contexts as single mothers, as independent unmarried women, as legal guardians of our children to be considered.

In every instance, it is important to pursue the larger equality we strive for. Vocabulary is crucial. We need to acknowledge in forms and in paperwork that there are parents, not "fathers"." Spouses" or "Partners" and not just "husbands". Maybe then, when this fundamental parity of vocabulary is achieved at the very least, it will be okay for a woman to proclaim that she isn’t a feminist.⊕

Not by BIAL alone

Devesh Agarwal of the Bangalore Chamber of Commerce and Industry disagrees with Albert Brunner, the CEO of Bangalore International Airport Limited on the latter’s recent interview to Citizen Matters on the airport controversy.

Prakruthi is inviting Bangaloreans to stand united with Mumbaikars in crisis. They plan to light 500 candles at 6.30 PM on 30th November at the Cubbon Park bandstand.

After getting no response from MLA and Corporator, on the works to be undertaken, the residents of Somasundarapalya try to reach out to their MP.