On February 23rd, residents of HSR Layout 3rd sector got together for installation of a composting device in the Twin Park, taking another step towards responsible citizen engagement in waste management.

On 1st September, 2012, a Walkathon had been flagged off by the HSR corporator K Latha Narasimhamurthy, initiating a mission to make the neighbourhood plastic-free and implement effective segregation of garbage. However, thereafter, there was not much significant progress noted on the solid waste management front. The issue, in general, turned big for Bangalore which turned into Garbage City, as we saw everyday in the daily newspapers and on TV. 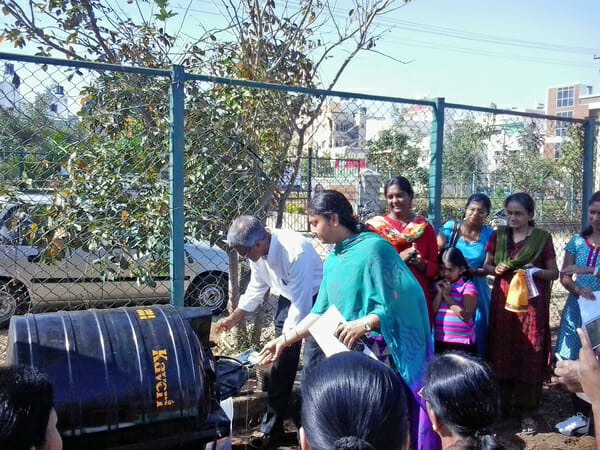 Members of the 3rd Sector Welfare Society geared up to the marathon task of initiating waste segregation and tried to ensure segregation through door to door campaigns, distribution of pamphlets, SMSes and e-mails to educate residents about the importance of adopting the system.

Social activists, Karunaprasad Kanavi, Dr Shanthi and others contributed their time and energy for this noble cause. The drive gained further momentum in the Layout as the Federation of HSR Layout took initiative to pass on the spirit and raise awareness among all the sector associations, so that they too geared up the campaign in their respective sectors in larger public interest.

On 18th February, 2013, H Jannappa, the new joint commissioner of BBMP, Bommanahalli Zone piloted a practical campaign on disposal of garbage by organising a demo by different agencies dealing in various compost devices. This meet, held at the HSR BDA Complex, emphasised the need to stop mixing waste. It showed to a larger audience that it was possible to utilize wet waste and convert it into garden manure in any scale – even at home, through the devices kept readily for demonstration.

This event impressed the residents and the RWAs, and they were enthused by the thought of having one of these devices to convert garbage into garden manure; perhaps, more so, as they were already fed up with garbage contractors who failed to execute proper door to door collection of wet and dry garbage. Many residents had complained that the BBMP collecting agency itself was mixing wet and dry garbage, thus worsening the process of management of solid waste.

Among the composting machines exhibited were Greentechlife Easy Indoor Composters, MorpH and EPOS Alternative Solution Compost Shredder. We preferred the MorpH manual compost device, which converts wet waste into garden manure which is a must for the park in which we planned to install it. Thus, on the morning of February 23rd, we organised installation of the device in the 3rd Sector Twin Park, presided over by Latha Narasimhamurthy and H Jannappa.

There were no red carpets or garlands, no puja or rituals……it was a simple, no-frills, developmental activity with the primary objective of demonstrating the functioning of the compost device installed. Residents were impressed and they feel proud now to bring their kitchen waste to the park from neighbouring houses and put it into the device as instructed, in a systematic manner with smiles on their faces.⊕

About H M Javali 1 Article
The author has not yet added any personal or biographical info to her or his author profile.

As the amended Motor Vehicles Act comes into effect, the city police is gearing up for better enforcement, especially in the CBD area. Read more on what else happened in the city over the past week, in our roundup

Opted for sustainable practices in waste management way back in 2011, today this community sends negligible amount of waste to landfill, processing or recycling every bit of waste produced.

Bengaluru’s airpocalypse: a workshop on problems and probable solutions

Bengaluru is following Delhi in terms of air pollution. What can air pollution do to us? Who is measuring the air pollution? How to control it? Get to know all about it, this Saturday.