“It is close to four years now and there has not been a single repair work of the road,” says Anil Kumar, but the RTI activist is not complaining! “It is strong, inspite of the many floods since 2008 when it was laid” says Kumar.

A conversation with Kumar makes it apparent that it is not just the roads themselves but the monitoring of the entire process that residents need to be aware of in order to ensure that a good road is laid.

In 1995, Ejipura was a new ward that lacked many basic civic amenities. A group of people from the locality decided to strategically work with the government to fulfil the infrastructural needs of a ‘new ward’. They took part in the participatory budgeting exercise organised by Janaagraha in 2001-02 that helped them draw up a plan for roads and other required civic amenities, and submitted the proposal to the Corporator. After negotiations, the Corporator made some budgetary allowance for laying of road in the area. That is not all that the group achieved – it merely marked the beginning of a road that would strictly match the desired standards. 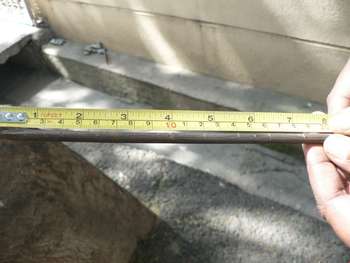 The easy-to-make gauge that can measure the depth of the road. Taken by Shamala Kittane

What is a good road ?

You don’t have to be a civil engineer to know that. However you need to familiarise yourself with a few things to be able to tell if the road that is being laid in front of your house is going to last as long as roads normally should – which is a minimum of five years.

Urban roads are of 5 kinds (see box) and speaking strictly of local roads, we can say that the following should help you gauge the quality of the road for yourself:

With access to the above information, you could yourself ensure that your tax money is being spent justifiably on a ‘quality’ road in your ward.

In the Ejipura example, the monitoring was done under the guidance of Dr. C.E.G Justo (Prof. Civil Engineering, (Retd.), Bangalore University).

The first step in laying a new road is to ensure that all that goes below the road is carefully planned for – the water pipes, sewage and stormwater drains, manholes.

“The drain for laying water pipes by BWSSB needs to be 3 feet as per the work order document., we measured it to be 2.5 feet and brought it to the notice of the engineer who then ordered digging as per standards specified in the work order document. The first step to laying the road was completed only then. The depth of the culvert needs to be checked, as otherwise the engineer could try to make a profit on the labour cost for digging work,” says Kumar.

Once the actual laying of the road begins, there are three important checks to be made.

Check 1: Ensure that the first layer of stones are not more than 15 cm apart (density). They have to be dense and must cover the surface of the path well. The roller has to run over this layer five times.

The distance between two stones should not be more than 15 cm. Difference in the first layer being as per standards and otherwise.Taken by Anil Kumar

Check 2: The second layer (the thickness of this will be specified in your work order document, it is normally 10 cm or 20 cm) is called the wet mix (technical name: “Wet Mix Macadam (WMM)”) and this needs to be a mix of jelly, quarry dust and cement. Usually the contractors only spread a layer of jelly stones as the second layer. WMM compaction needs to be done using a roller at a speed of not more than 5 km/hour. Rolling has to proceed from lower edge towards upper edge and parallel to the centre line of the road. The next layer can be placed above this after a minimum of 24 hours. No traffic movement should be allowed in this time.

Check 3: Asphalting – This is the final layer of bitumen and needs to be only 5 cm thick. Traffic may now be allowed.

Anil Kumar has even devised a gauge to check the thickness of the materials laid. It is simple, rugged and useful.

The easy-to-make gauge that can measure the depth of the road. Taken by Shamala Kittane

“Normally road cutting is done within half a day. But it took two days for a recent road cutting work to be finished. That’s how strong our road is” Kumar proudly claims.

Urban roads are classified into five categories according to the Tender Sure (Specifications for Urban Roads Execution) document 2011:

1) Arterial : These are high trip density corridors like the ring roads that would connect the business hubs to residential areas. Roads connecting National Highways, State Highways also fall under this category.

3) Collector Roads: They aggregate traffic from local road networks within residential neighbourhoods, commercial roads, and industrial areas and link this to sub arterial and arterial roads. High volumes of traffic.

4) Local Roads: These form the access networks for individual dwellings and residential developments. Majority of trips in urban areas originate from and terminate here. Such roads must allow for streamlined parking and safe and comfortable cyclist and pedestrian movement. Heavy traffic and commercial traffic must be restricted on these roads with adequate traffic calming measures designed for each street and intersection.

5) Sub-local streets / Access streets (conservancies): In some of Bangalore’s older neighbourhoods such as Chamrajpet, Basavanagudi and Malleshwaram narrow lanes were reserved as conservancies and used for utilities such as drainage, sewage and in the recent past for electrical poles and transformers. Over time these are being used as access roads for parts of properties facing the conservancies.

The Tender SURE specifications

Tender SURE specifications are used for construction of new arterial and sub arterial roads. For local roads resurfacing works for local roads, BBMP refers to the guidelines book.

The design for a 8m and 9m local roads. Picture taken from tender SURE document.

The Tender SURE document is inclusive and looks at urban roads as “the stage where the tableau of urban society can share space equitably – pedestrians, cyclists, hawkers, buses, motorists”. The recommended design is based on City Connect’s experience in designing Vittal Mallya Road and Walton Road in Bangalore, says V Ravichandar of City Connect.

Tender SURE currently is not planned as a citizen monitored road. Ravichandar however says, “we would love it if that can be enabled. What we have pushed for is an independent third party professional audit as part of the project.”. B. T. Ramesh, Chief Engineer (Roads), BBMP concurs.

The recent state budget has allotted 200 crores (maybe revised to 310 crores to include BWSSB works) of Tender SURE roads. And five roads in Metro Reach-1 between MG Road and Byappanahalli will use the Tender Sure standards.” according to Ravichandar and that puts 50 roads (arterial and subarterial) on the Tender SURE list.

The coming together of the neighbourhood to participate in the monitoring activity of the road construction led to the formation of an active representative group that regularly interacted with the corporator and other government agencies. This had other benefits as well.

The PROOF (Public Record of Operations & Finances) campaign that involved scrutiny of BBMP budgetary allocations and expenditure was started during 2002-03; this was used to analyse the BBMP budget and give inputs to BBMP every quarter. Later on, it became a half-yearly review, but was eventually discontinued due to the objections from Corporators as well as officials of BBMP to the campaign.

The group also Initiated monthly review meetings between residents and officials from various departments such as BWSSB, BESCOM, BMTC and the Police. This cumulative effort helped in timely resolution of issues within the ward.

As a result of the regular interaction in 2003, a document detailing issues concerning various departments like BWSSB, BESCOM, BMTC, POLICE was compiled as a part of the ‘ward vision’ exercise. Some of the issues covered in this vision document were: door to door garbage collection system, proper channels for storm/rainwater and sewage water, installation of distribution transformers to avoid low voltage, increase in frequency of BMTC buses from Ejipura and Koramangala to different destinations.

Kumar informed Citizen Matters that this was brought to the notice of the then Mayor P.R. Ramesh who did not take any action on the ward vision documents presented by 10 wards. However, they followed up with individual departments and were successful in accomplishing the objective of making Ejipura as one of the well developed wards.

“This is ideally how Ward Committees should work. They should work alongside BBMP to draw up long-term plans (5-year period) for every ward addressing the need for various civic amenities & infrastructure like roads, storm water drains, underground drains, water supply, rain water harvesting, traffic management etc. These can be finalised by the BBMP in consultation with all stakeholders,” Kumar points out. An approach of this sort works best rather than filing complaints against executed plans which we did not bother becoming a part of.

Kumar himself has taken away several interesting learnings from his experience of working with the government.Through this exercise, he learnt the importance of being aware of the powers and functions of MPs, MLAs, Ministers, corporators and the officials of the corporators; knowing all of this could save one a lot of effort and time.

Interestingly, he cautions “Spouses of the Corporator should be kept out. Resident committees should refuse to recognize them or deal with spouses of the corporator. They are unelected and unaccountable, and could be a source of great mischief.”

According to Kumar, “Our attempts at Participatory governance did not bring unalloyed success and produced only mixed results. However our experience holds many useful lessons.” And of course, a very well done job on a road!⊕

In-council elections for Bangalore’s mayor and deputy mayor were held on April 29th. The ruling party had already reached a consensus and proceedings were smooth.

Bangalore Central Congress candidate Rizwan Arshad: “Representatives should think out of the box”

MLC Rizwan Arshad is the Congress candidate for Bangalore Central constituency. In this interview with Citizen Matters, Rizwan talks about his accomplishments, Congress’s poll promises on GST and police reforms, his allegation against MP P C Mohan, and so on