Recently I ventured into the RTO office at Bhattarahalli, K R Puram, to renew my driving licence (DL). Using the Citizen Matters guide and BMTCinfo.com, I figured the bus routes from Mayo Hall. I reached the office, which is 6 km from KR Puram Railway/bus station, in little over an hour.

I went with a lot of optimism, as I had heard things had gotten streamlined and ‘clean’. I was armed with the Form 9 that I had downloaded from the RTO site and filled.

When I reached the office, I saw several agents hovering at the entrance, whom I ignored. The three gentlemen at the reception seemed very busy indeed, explaining details and dishing out forms. When I enquired about the renewal of licence, I was directed to the ‘DL Office’ on the 1st floor. 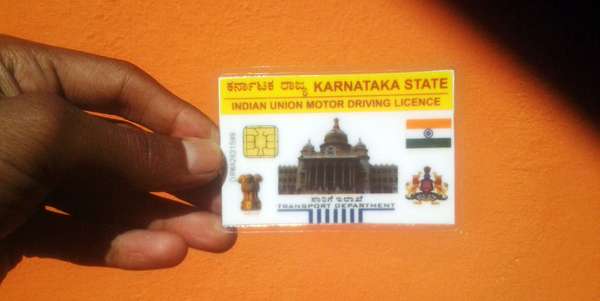 The staff seated at the counter there glanced at my form and said I had not got the ‘envelope’. On further queries, I gathered that they meant a pre-stamped envelope that would be used to post the new DL to me. I was told to go ‘outside’ and get it.

There were many shops behind the RTO building, selling all ‘RTO ware’. I was asked if I needed a ‘full-set’. A full-set had a thin brown paper folder, a stamped envelope, a small ziploc cover for the old licence, a set each of the forms needed, a tag to pin all the documents and a verbal reminder to attach a photocopy of proof of address!

Sure this makes it convenient and organised. However it would have been better if the required things were listed on the RTO website or made available at a fixed cost with proper information and signage at the RTO office itself.

Finally I settled for just the envelope with stamps, paying Rs 28 for the cover with stamps worth Rs 17.

As I was leaving, I noticed a gentleman at the shop filling a DL Renewal form for someone else. It included a medical certificate. So I asked him if it was mandatory as the website says it is needed only for people above 40 years. He said it was and told me I could easily get it done. I now had to buy the form (Form 1-A) from them by paying Rs 5.

When I asked at the DL office on this, they repeated the same thing – that it is compulsory despite the fact that I have not yet turned 40. They suggested that I go to the Government Hospital at K R Puram to have it done.

As I entered the Hospital, an agent lurking at the reception welcomed me. I ignored him, went in and joined many others with the by-now-familiar brown paper folder, waiting outside a closed door. An attendant was helping everybody go in.

I had prepared myself for a medical test with sight-checking, BP, heart etc. Instead here was a doctor, surrounded by patients, simultaneously signing several forms. I noticed the agents slipping a note or two to the attendant. As I stood in the group, the attendant tried nudging me to the corner saying he will get it signed. I refused saying I would do it myself.

The doctor mysteriously chose to ignore my form. I waited patiently. When my turn came, he commented on the photo not being pasted and shouted out to his attendant to do it. Once again I said I would do it myself.

The doctor filled the various details on the form with no questions asked, asked me for my blood group and then signed the form, before moving on to the next form.

I left the room and the hospital. Only when I was on my way back to the RTO’s office did I realise that I had not obtained the seal and stamp of the doctor. It also struck me that the attendant had accompanied the others out, obviously for the stamp, seal and other ‘exchanges,’ while I had come out separately.

I returned to the RTO and was directed by the man at the reception to pay the fee at the cash counter. I joined one of the two long queues. When my turn finally came, the cashier checked my form and told me that I had to go back to the DL section to get their signature.

No information, procedures shrouded in secrecy. And of course the ubiquitous agents!

When I went there, I was directed to yet another ‘cash counter’ with no signage. Here another gentleman went through my form again. He told me there was no doctor’s seal. I informed him that perhaps because I had not paid the attendant the seal and stamp had been left out. Another person at the counter advised me to pay the attendant and get the job done as the seal was important.

Finally, the man at the counter told me that my license expires only in November so it was due for renewal only after that, and told me to go home.

I knew the license expires in November, but nowhere on the RTO website or in the office does it mention, the timeline for renewal or that it can be done only after expiry.

While I felt irritated with the doctor, the man at the cash counter and many others, I do realise that they are merely the symptoms of an inefficient and weak system. In the whole episode, I was piqued by the lack of signage at the RTO’s office that explains the procedures for different category of the visitors. From my experience, it looks like crafted to result in ambiguity that allows for enough palm-greasing.

Now I have to return to the RTO’s office in November. I do hope things would have changed for better by then.⊕

‘Any civic agency works well, provided we use it’

Sheela Ladha, an active volunteer with CMCA believes that if children are taught proper civic sense at the right age, it reflects throughout their lives and also helps the city they live in.

Time to move out of caves and itoilet train?

For a generation of kids adroitly handling mummy’s smartphone, gadgets could well help with life skills training, but are there enough takers? Reshmi Chakraborty shares her findings.