On February 23rd, get on your bicycle and join the Critical Mass Bangalore group for a two- hour leisurely ride through the city. We assemble at Press Club, Cubbon Park, at 8am. The last one was on Republic Day last month, which fell on a Saturday. 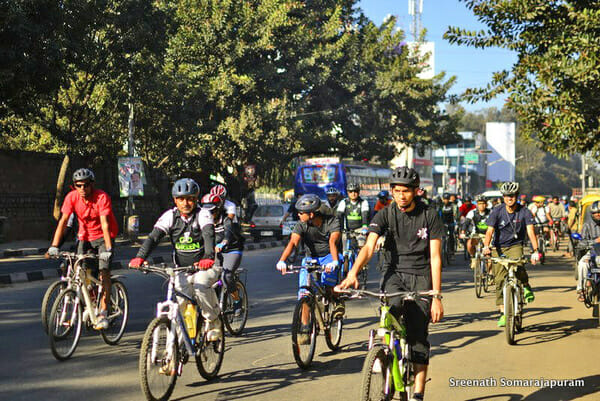 Critical Mass bicycle rides happen on the last Friday or weekend of every month in more than 300 cities worldwide. The concept began in San Francisco 20 years ago, and the idea is simple – reclaim the streets of your city for the bicycle and show that cycles can be part of traffic too.

In the Indian context, the idea is to get the urban middle class out of their cars and back onto bicycles – for commuting to the office, going to buy milk and groceries, going to the mall, etc. 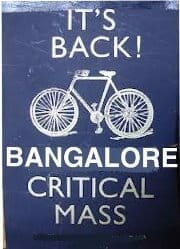 Traffic in all our Indian cities is steadily getting worse. A bicycle can be as fast as any other mode of transport, saves money on petrol, and provides exercise. Apart from these individual benefits, cycling of course reduces pollution and carbon emissions.

Critical Mass is not meant to be an organized rally and has no formal organiser – it will have cyclists from the Go Green group, Bangalore Bicycling and other clubs and plenty of individual riders. Thus, you can join a group of cyclists spontaneously coming together to show that cycles are a cool and effective way of getting around the city. Bangalore has many cycling groups – Critical Mass is an occasion for everyone to come together and ride as one.

Come and join us on the last Saturday of every month at 8 AM for a leisurely 10-15 km ride over a couple of hours. All ages welcome, kids especially encouraged! We ride at the pace of the slowest rider and try to pick a new route / theme each time. This Saturday, February 23rd, we assemble at Press Club, Cubbon Park at 8 AM.

About Satish Vangal 1 Article
The author has not yet added any personal or biographical info to her or his author profile.

Rate your ward councillor for CfB’s ‘Corporator No 1 Awards’

Citizens for Bengaluru will award the city’s best corporators in a ceremony on July 14th. The awardees will be selected based on citizens’ rating through an online survey form

The Karnataka Quiz Association which fostered Bangalore’s quiz culture, is celebrating its 25th anniversary on 28-29 June. It is time to revisit the KQA and get reacquainted with its spirit.