"I want a Bangalore, where a child and an elderly person can both feel safe while crossing the road", proclaimed esteemed Kannada writer, Sri Ananthamurthy, at the recent Bangalore Literature Festival, 2012. Much more than a reputed author and social commentator, this distinguished gentleman has driven home the point about our city’s warped road sensibility. However, these words of wisdom from a celebrated old guru, is something that Bangalore apparently is least inclined to heed.

In this modern burgeoning city and India’s fifth largest metropolis, the chances of a pedestrian crossing the street without being knocked down are looking progressively bleak. That’s what an article in The Times of India has claimed, tallying the death-toll of walkers in 2012 to a staggering 355! Such a figure translates to a looming 47 per cent of all road accidents in Bangalore, in the last year alone.

Plus, according to a survey from the same newspaper in Dec 2011, the city’s most crowded areas (Jayanagar and Majestic) currently fulfil only 50 per cent of the criteria of the Pedestrian Walkability Index (PWI). 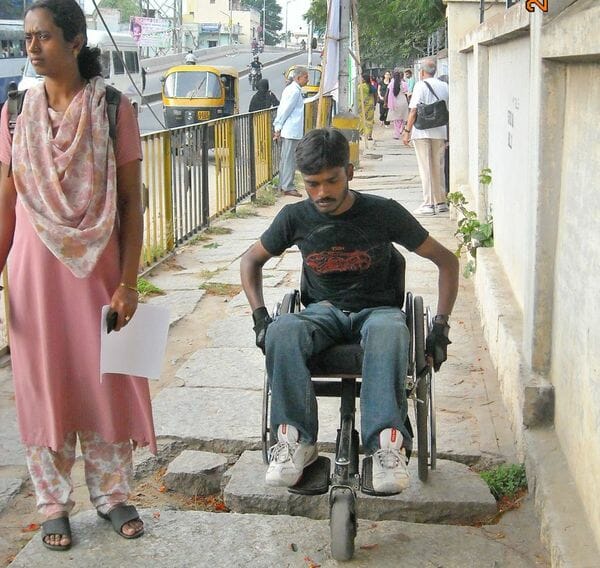 As for zebra crossings in Bangalore, pedestrians using them are still likely to feel akin to that "deer in the headlights". In fact, the possibility of a cow crossing safely on the same stripes, seems to be much higher.

Additionally, if one notices the pedestrian "walk/don’t walk" signals at major junctions, the timing of the light-change, is woefully off. Has anyone observed how in some places, the "go" light for walkers to cross, as well as that for the vehicles to proceed perpendicularly, both transition simultaneously? Hence, one wonders, if one’s time to become one more road-fatality, is just one sign away!

It doesn’t matter that the population of this fair city is teetering on 10 million, while our vehicles still add up to a mere 0.4 million (according to the Bangalore Traffic Police Website). The ratio thus works out to 4 cars against every 100 persons. Safety in numbers, perhaps. But when that unflinching, formidable object is hurtling straight at you, you might very well feel like one of nine pins, set to be "bowled over."

With Bangalore’s population increasing tenfold over a single generation (1980 – 2010), she has turned out to be one of India’s, and indeed the world’s, most populous cities. With Per Capita Income having increased steadily and the affordability of vehicles also keeping pace, this once- accommodative town is now traffic-jammed. What has further stifled the city’s major thoroughfares, such as CMH road and MG Road, has been the visionless endeavour to keep Bangalore’s metro-rail above ground.

A cat-and-mouse game on the roads

Now, aggrieved pedestrians usually blame reckless drivers for their woes. It is true that traffic indiscipline is both breaking records as well as, walker’s bones. Plus, when the cat is away the mice do have a tendency to scurry around in mischievous play. The "cat" here is the Bangalore City Traffic Police Department, where the official figure of its uniformed law-enforcers has been pegged at an astoundingly low 3,262, with vacancies for just 346 more personnel. Even at the department’s full strength of 3,608, the number comparison works out to around 0.03 policemen per 100 people in the city!

Hopes are now pinned on technology to offset the poor efficacy of a grossly understaffed police force. Indeed, as per an official statement from the Bangalore Traffic Police (BTP), 80 cameras have been mounted at junctions across the city and have been wired-up to a monitoring centre, in order to keep a close watch on traffic offenders. But hold your breath: to perform the actual confrontation of runaway traffic-errants, a jarringly-low six interceptor-vehicles have been put on the road.

One has to, of course, admit that these initiatives are a start towards tackling a growing urban menace. But if the powers-that-be are going to maintain the ratio of traffic cops to vehicles at an unsettling 1:400, then poor pedestrians cannot hope for too much support in the contest of staying safe.

Furthermore, issues faced by walkers are not even mentioned on the BTP website as an area of concern or safety. Thus, the onus of dodging out-of-control cars, buses, scooters, autos and bikes largely falls on the shoulders of the pedestrian. But there’s little the point-person here can manage, when his adversaries’ habits of not sticking to lanes, overspeeding and ignoring indicators, as well as disregarding one-ways and other instituted road-rules, define the traffic malaise.

A far more sinister trend, and one that appears to be growing, is drivers disobeying traffic lights at junctions. The twisted rationale by such law-breachers seems to be – "If no law-enforcer is present and vigilant, and I am anyway both adept and quick enough at crossing the intersection with a reasonable chance of staying safe, then jumping the red-light is my fundamental right!" The absurdity and frequency of this phenomenon, induced even stand-up comic Russell Peters to quip, "You know what I love about the traffic signals in India? It’s that they’re optional!"

Where Bangalore is concerned, a once laid-back town which had plenty of time on its hands (among other things, to just walk and cycle) appears to have become a little too gung-ho in taking vehicular risks. After all, in a cosmopolitan and globalised city which stays constantly in overdrive, the importance of work-deadlines and life-deadlines are often weighed in equal measure.

Where do we walk?

Another outrageous malady is how the pavement, which should rightfully be considered the domain of the pedestrian, has now become a sort of free-for-all territory. In other words, even drivers of two-wheelers feel it is their prerogative to jostle for space on it. As though it is not bad enough that the sidewalks are mostly ungenerous and uneven in the first place, pedestrians now have to feel "sidelined" even in their own space. In such a scenario, it is perhaps not surprising that some road-signs in the city read: "Please do not drive on Pedestrian!"

But it’s not that unwelcome scooterists and motorcyclists are the only ones to take up space on sidewalks. Imposing over-the-road signs which display electronic traffic warnings – for example, "Don’t Drink and Drive", or "Wear Helmet, Be Safe" – incidentally stem from thick cylindrical poles that block pavements. The obstacle is sometimes so great, that walkers have to find a way around it, often at the risk of a tight squeeze or asphyxiation. While these signs are necessary, they are best restricted to being slapped on hoardings so that they don’t impede walker-movement.

Then, there are several skywalks that have been installed across the city’s thoroughfares, again compromising on the pavement-space from where they ascend and descend. And considering that a survey on pedestrian safety in Bangalore conducted by The Times of India found only 13 per cent of Bangalore’s pedestrians actually using these skywalks, the investment hardly seems to be money well spent!

Granted that with the enormous volume of city-residents on foot, drivers themselves can’t be entirely blamed for hitting into them. But then, these tax-paying pedestrians must be given more stake in our city streets. Thus, along with their tax returns, they should be provided an attested account of just how much of their money is going into fixing crumbling pavements, as well as, what related projects have been comm
issioned and where lie their status of progress. One wishes none of our disenchanted senior citizens or disabled friends would be obliged to invoke the Right to Information Act (RTI) merely to gauge their chances of using a public amenity.

Speaking of those woefully-neglected walk-ways, the brave pedestrian will notice that most of Bangalore’s pavements essentially present at least one of five potentially life-threatening hazards:

In inference, therefore, it is not surprising that the aforementioned survey also shows that just 50 per cent of urban Bangaloreans would consider walking a maximum of only 15 minutes on any day they decide to give vehicular transport a miss. With another recent survey showing that 43 per cent of corporate Bangalore is overweight or obese, we could certainly do without the city’s disincentives to becoming a pedestrian.

As an ardent walker myself, I’m sincerely hoping my country’s roads will take me home… and not, to the mortuary, or the hospital. Bangalore can lead the way in attaining this developing nation’s very critical goal – to set our vehicles and pedestrians on the right path. We are at the crossroads. Now we just have to give our walkers the right of way.⊕

“Trash can be cashed”

IIM-B student, Amrendra Kumar is confident that if recycling is monetised, people will be motivated to take it up.

“Govt decision to replace AC buses welcome, but not enough”

The recent government decision to replace Volvo AC buses with regular buses is welcome, but more should be done to provide quality service to all commuters, says the collective Bengaluru Bus Prayanikara Vedike

Garbage should be an election issue

Basic considerations to tackle the trash problem should include ward-level efforts, and making it an issue for upcoming assembly election.