The recent report by the Comptroller and Auditor General (CAG) has exposed that Manyata Tech Park in Hebbal had illegally grabbed majority of its land. The tech park is a mixed development project spread across about 300 acres. Of this, over 160 acres was public land which Manyata Developers got from different government agencies, though there was no provision for this.  Manyata Developers is a real estate company based in Bangalore, headed by Reddy Veeranna. Manyata tech park has commercial spaces including a Special Economic Zone (SEZ) and mixed residential development. 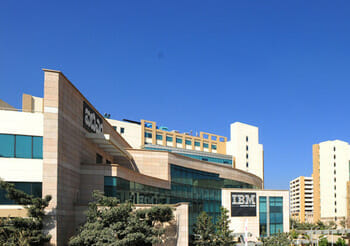 In this case, it is clear that the developer could not have gotten the land without some major favours from two governments, that of S M Krishna and Dharam Singh. The report, which exposes other major scams also, is now being discussed by a legislative committee. The committee has had a preliminary meeting, and has sought more time to discuss the report.

Manyata Embassy Business Park, an IT SEZ (Special Economic Zone) is one of the biggest tech parks in the city. The land grab saga is spread over many years, starting from the year 2000 and ending only in 2008. Overall, it got about 170 acres from government, of which only eight acres was legal. According to Manyata Developers’ website, out of the total 300 acres, 88 has been used for landscaping and about 105 acres for civic amenities (roads, drainage systems etc).

2000: Government approves 8 acres for Manyatha‘s IT park. But Manyata asks KIADB to acquire 100 acres
2000: KIADB decide on its own to oblige Manyata with about 98 acres, against its mandate
2004: BDA notifies agricultural land for forming Arkavathy Layout. S M Krishna orders that 131 acres of land should be left out and acquired on behalf of Manyata.
2006: Dharam Singh orders 60 acres to be given to Manyata.
2007: BDA finally denotifies 60 acres from Arkavathy Layout.
2008: Manyata requests 25 acres from this and another 2 acres, to get 27 acres.
It also gets 43 acres from farmers whose land was originally notified by BDA and then denotified at the Governor’s recommendation.

It got the 8 acres initially, in the year 2000, on applying for approval of IT park to the state High Level Committee, of the Department of Commerce and Industries. Manyata told the committee that it already owned 190 acres and needed only another five more. CAG report says that Manyata did not in fact own the entire 190 acres, and that this number includes the land that it expected to get from KIADB later (around 100 acres).

The committee granted 8 acres based on this, and KIADB (Karnataka Industrial Areas Development Board) was asked to acquire this land and give it to Manyata. Soon after this, Manyata asked KIADB to acquire not eight, but 100 acres for the project. It said that the project was for a mixed development, including residential area.

KIADB has no powers to decide on land acquisition on its own; it can only acquire land when the government asks it to. But in this case, the Board acquired over 99 acres for Manyata in Rachenahalli and Nagavara villages. So instead of the eight, the company got 99 acres.

After this first illegal allotment, the next happened in 2007, of 27 acres. In 2001, the S M Krishna government had decided to acquire 130 acres for a separate biotech park planned by Manyata. In 2004, when BDA notified agricultural land for forming Arkavathy Layout, Krishna ordered that 131 acres of land should be left out of the notification and acquired on behalf of Manyata. The company’s request for denotification was pending before BDA’s Denotification Committee.

Government’s IT/BT department, which was supposed to work with Manyata on the biotech park project, informed BDA that Manyata had shelved the project. The department was going ahead with the project on its own, and needed only 50 acres to be acquired. BDA then rejected Manyata’s request for denotification.

But the next Chief Minister Dharam Singh came to the company’s rescue. He said that IT/BT was a thrust area for government, and hence Krishna’s 2004 order should be implemented. A senior officer at CAG says, on condition of anonymity, that Manyata had not mentioned the name of the project in any of the applications, but only says that it needs land for an ‘IT park’.

Dharam Singh ordered that only 60 acres needed to be given to Manyata instead of 131. Based on this, BDA finally denotified 60 acres from Arkavathy Layout, in 2007. CAG report says that, by doing this, public interest to form the layout was subjugated for the interests of a private party.

Surprisingly, after all this, Manyata did not request government to acquire this entire 60 acres on its behalf, but only 25. It also asked for an additional 2 acres to be acquired separately. By now, the company had acquired 127 acres from the government illegally.

The company got another 43 acres for its use a year later – this was done in a roundabout way. Soon after government denotified 60 acres for Manyata, some owners of the notified land said that they should also get this favour. Together, their land came to 49 acres; of this, BDA was yet to take possession of 43 acres in Rachenahalli and Dasarahalli villages.

“We can only roar from the streets. The only option is for someone to take these cases to court“

When government did not heed their request, these owners went to Rameshwar Thakur, Governor at the time. Thakur recommended that 43 acres, which BDA had not acquired already, should be denotified. He said that this is in public interest, since poor farmers would be benefitted. So in May 2008, 43 acres was denotified for the sake of farmers.

But the very next month, Manyata applied for a NOC (No Objection Certificate) to BDA to use these same 43 acres for a project, without giving more details of the project, in the application. The NOC was soon granted, and now Manyata had 170 acres of land for its use, as opposed to the 8 acres it was supposed to get originally.

The CAG officer says, “Manyata may have made a joint development agreement or so with the farmers. Generally, there was a lack of co-ordination between different departments on what was happening. Manyata took advantage of this, and applied for land repeatedly.” Manyata Developers was not available for comment, even after repeated calls and emails from Citizen Matters.

What action will the government take?

Though CAG has presented the report, it will take some time before any action may be taken. The report was presented in the winter session of the legislative assembly in December. Both opposition parties – Congress and JD(S) – asked for the session to be extended by a day, so that they could discuss the report. But the Speaker had turned this down, and there has been no discussions. Congress MLA Narendra Babu says that nothing could be done because of this. “We can only roar from the streets. The only option is for someone to take these cases to court,” he says.

But CAG reports go to Public Accounts Committee (PAC) of the state legislature. PAC consists of 15 MLAs and five MLCs, and is chaired by T B Jayachandra, Congress MLA (Sira constituency) and Deputy Leader of opposition in the assembly. PAC is supposed to go through the reports para by para, identify important cases, and call the concerned Principal Secretaries of different departments for hearings. The Principal Secretaries will be asked to give explanations in each case.

One or two senior members of CAG will also be present to assist PAC; they can also ask questions to Principal Secretaries. The meeting proceedings are recorded in-camera and are not open to public. So far, only one meeting has been held on the BDA report, on December 21st. The CAG officer says that this was only a preliminary meeting and not much has been discussed. PAC has sought more time to discuss the report.

The number of meetings depend on the gravity of issues – the scale of financial loss, impact on public interest, how contemporary the issue is etc. Sometimes, only a couple of hearings are required, but there are also those like the report on KIADB released last year. PAC had held 14-16 hearings on this report, which had indicted former Chief Minister B S Yedyurappa.

M P Nadagouda of JD(U), a former PAC member, says that only about one-twentieth of the report is usually chosen for discussion. “PAC consists of policy makers and hence they focus on macro level issues,” says a senior bureaucrat at Vidhana Soudha. Since the proceedings are confidential, PAC members were not ready to divulge more details. PAC Chairman Jayachandra could not be reached for comment.

PAC will give its recommendations

Once the hearings are over, PAC will submit a recommendation report to the government, which is a public document. This report is placed in assembly and goes to different government departments.

The Vidhana Soudha officer says, “The recommendations are more like directives, and departments are supposed to implement them directly. Usually this report is not contested in the assembly; it is accepted as is. Action does happen based on it.”

After some time, PAC will present an Action Taken Report (ATR) on how much of its recommendations have been implemented. If no action was taken, departments have to give explanation for this. Though assembly elections are approaching, the CAG officer is confident that all hearings on the BDA report would be completed before this.

Some other cases in the report are that of Indiranagar Club and Suchitra Film Society.
Part 2 of this article: Coming soon.

Pothole deaths: For concerned officials, no accountability, no action, no deterrence

With increasing pressure from the public, the Bengaluru Traffic Police has of late been booking more cases against engineers for pothole-related deaths.

Animal shelters do a great job, despite odds

A visit to CUPA’s Bannerghata Rescue Centre and PfA’s animal hospice in Kengeri shows the centres doing their best for the animals.