I have with me, two news items — the one dated January 19th reports in prominent, bold type, that the Supreme Court "ordered all states not to give permission for installation of any statue in a public place or road, because citizens’ right to move freely must not be obstructed in any manner" and that the government must instead use the money on "ameliorating the plight of the poor and not on showcasing achievements by putting up obstructions on the roads." 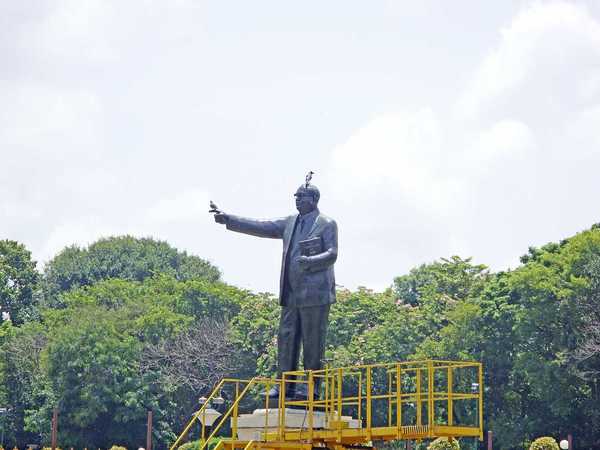 The court order specifically mentions statues. Hearing a plea against the erection of a statue at Neyyattinkara (Kerala), the order directed chief secretaries of all states to ensure that these guidelines were followed.

In the clipping dated 23 January, titled ‘Invitation for short term quotation" , the Executive Engineer of Basavanagudi division of the BBMP has invited quotations for erecting bronze statues of Nanjegowda, Krishna Iyer, and G Narayana , each of five feet height and weight of 300 kg (four times the weight of an average adult male) in ward 155 (Hanumanthanagar).

When it comes to providing services (road repairs, rubbish removal ) the BBMP claims to be cash strapped. Even pourakarmikas have not been paid wages by the BBMP for the last three months, and according to a report dated 24 January, threatened to go on a strike from January 28th. They have also protested against lack of even basic facilities. (protective wear for handling filth). Their protest meeting in the last week of January drew a massive crowd of disgruntled employees. So, chief secretary saar, how does one reconcile the apex court‘s directives with the BBMP’s call for tenders for erecting statues?

Amazing is the only word that comes to mind, This is about how, in Jabalpur in Madhya Pradesh, the city administration razed over 300 wayside temples, mosques and churches, to facilitate the free flow of traffic, after first convincing the citizens of the need to do this and getting them on board, so that even with tears in their eyes, they assisted in the razing and carting away of idols, crosses and rubble.

How the collector, Sanjay Dube, managed this, is a lesson that other cities ought to learn. Why did such a momentous initiative not get covered by mainstream media, when it is an achievement that should bring the highest honours and awards to the city administration? The police force stood by, armed and ready, to be sure, just in case trouble erupted, but the citizens (including religious leaders and ordinary residents) declare in the film (in Hindi) that this was "distressing" (dukh hotha hai) but necessary as the public spaces were getting congested.

Our attention to this video clip was drawn by reader S R Ayyangar who wonders how Bangalore’s administration can even consider spending an extra Rs 100 crore, to avoid shifting the Ambedkar statue at Vidhana Soudha to facilitate the Metro work, when it is possible to take the people into confidence, convince them of the need to conserve money for more important projects, and get on with whatever needs to be done. Jabalpur shows that it can be done, without causing trouble or communal clashes.

And God, if asked what He would like, whether to leave wayside structures untouched even if it means harassment to residents, would answer, "No, serving the people, and using public money for helping the poor, is the highest form of praying to Me." Hats off to Collector Dube and his team. Watch this film, it should go viral.⊕

Why should people pay full amount for LPG?

Why can’t gas agencies take the subsidy from bank account directly, why people have to pay extra?

Little did one realise that waste management meant to save the environment would upset the marital harmony in so many families.

Bangalore is lucky to have IISc. And Bangalore’s women of science are lucky to have the Women in Science panel headquartered there.