Trees are as much a part of urban infrastructure and planning as roads and buildings, and most town and country planning acts worldwide include well thought-out provisions to nurture and protect trees. But Bangalore had clearly not been in sync, as was evident from the conclusions at a recent meeting of the Environment Support Group (ESG) on the 26th of January, 2013.

The meeting included people from various backgrounds – students, professionals, civic representatives and had been convened with a view to seeking public opinion and consent to amend the KPTA (Karnataka Tree Preservation Act, 1976). 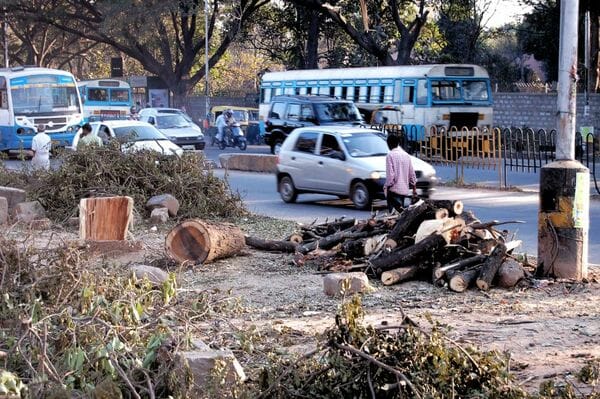 The 2011-12 BBMP budget speech has allocated 55 crores to widen ten roads. This even as BBMP now considers it wise to drop widening of some among the 216 roads totalling over 800 kilometres, on their original list of roads to be widened, published in 2007-08. Mysore Road is one of these, where road widening has been undertaken and the tree stumps are now being removed.

PILs were filed in 2009 to oppose felling of trees in Lalbagh and Sheshadri Road and also, road widening projects. (The list of PILs filed in this context are here.) One of the PILs filed by ESG (Environment Support Group, Bangalore) had come up for hearing on 3rd October 2012, at which the Principal Bench of the Karnataka High Court, then constituted by Chief Justice Vikramjit Sen and Justice B V Nagarathna, addressed some of these concerns.

The bench focussed attention on certain fundamental flaws inherent in the Preservation of Trees Act, and it was in this context that the meeting was organised by ESG.

Several critical points were discussed, some of which are summarised below:

1) There is a need to have separate rules for trees in urban and rural areas, primarily because the intent to fell trees is not the same in these cases.

"In rural areas people who fell trees are the ones who plant and nurture them. Trees are also well protected in rural areas and tree-felling cases are brought up in Panchayat meetings. The Panchayat is an interactive committee, where people are far more participative in discussing local issues and governance when compared to people participating in urban area governance," Saldanha said.

He also said that the law should not harass these people, who may have to travel long distances to obtain permission to fell a tree. This may deter them from planting trees, wherein the objective of the Act is defeated.

2) "Trees should be the last casualty in any project plan," the Act states, but this is never the case. Take the case of ‘Sankey road’ widening project, or that of the underpass in Basavangudi near MN Krishna Rao Park. Even in the Metro station project coming up on Nanda Road (Jayanagar), it was only after wide public protests that the felling of trees was stopped.

The Act therefore needs to be amended to mandate ‘public’ notice and consent prior to felling of trees for a project. The notice has to be put up on the trees so that people in the neighborhood are aware of it.

"Every project should include budget for tree planting and maintenance, without which the budget allocation for the entire project should not be approved," suggests Devare.

3) "In most cases trees are felled overnight and although the law requires that the auction of the felled tree for timber be held in public spaces during the day – this is also done discreetly and in some instances at the BBMP office itself," the group alleged. The KPT Act needs to be amended to address this issue; BBMP should create a 24/7 helpline to address the complaints of tree felling even if it is in the night.

Sheshadri Ramaswamy added, "What now makes it easy to cut trees is the fact that the forest cell is now in the same building as the BBMP office. The proximity puts tremendous pressure on forest officials to permit felling of trees". This was brought out by an RTI investigation done by Vikram Sinha and he plans to pursue this as a case of corruption according to his statement in the report covered by Citizen Matters.

4) Another important issue is the draft amendment to the Trees Act expanding the numbers of tree species that may be felled without prior permission to 41 (including the 11 in the existing list). It was pointed out that almost all the species now included for exemption constitute the major tree wealth of both rural and urban Karnataka.

Although the above proposal to amend the KPTA has been put on hold in
the face of strong public opposition to the amendment, it is an opportune time to look at the flaws in the Act. "The law is only as strong as the Act. If there are no ambiguities in the way an Act is drafted, it becomes easy to achieve the intent of the Act," says Saldanha.

"so far as the availability of an appeal is concerned, it seems to us that it may be futile and infructuous in those instances where the Tree Officer grants permission to fell a tree. Public perception is that such orders are executed almost instantly and at night. The Act does not seem to cater for such eventuality. Furthermore, so far as the constitution of the appellate body is concerned, it comprises of three members such as a Mayor or President of the Municipal Corporation, the Municipal Commissioner or Chief Executive etc., who are in effect the persons proposing the felling of a particular tree. This may amount to a person being a judge in his own cause, which is an anathema in law." (Emphasis supplied)"Src:esgindia.org.

ESG plans to compile key opinions and suggestions from the meeting and draft it as an amendment to the KPTA, 1976 to strengthen the Act so that it can execute its real purpose, which is the ‘Preservation of Trees’. It will be submitted to the Chief Justice and Justice of High Court on the date of renotification of the PIL – 26th February 2013.

Cutting of trees is not only about the loss of a life, or ecological adversities that it brings about or the end of a tradition that revered trees. More often than not, such practice even brings to light corruption that affects livelihoods and bad urban planning that could be irreversible.⊕

With more and more apartments installing sewage treatment plants, recycled water is available for use. After RO treatment, this water becomes potable. But are people drinking it?

Bengaluru needs better railway network, because trains are cheaper and faster than any other mode of public transport. Namma Railu citizens ask you to support the Namma Railu campaign today!