On the 22nd of January, I met a friend for coffee in Indiranagar. Namrata is a new friend; we are still getting to know each other over our once-a-month cups of coffee. We spoke of current affairs (a largely demoralising conversation) and then, after coffee, she said that she would like to show me a public art project that she has been involved in and quite proud of. Something in her voice and eyes made me curious. 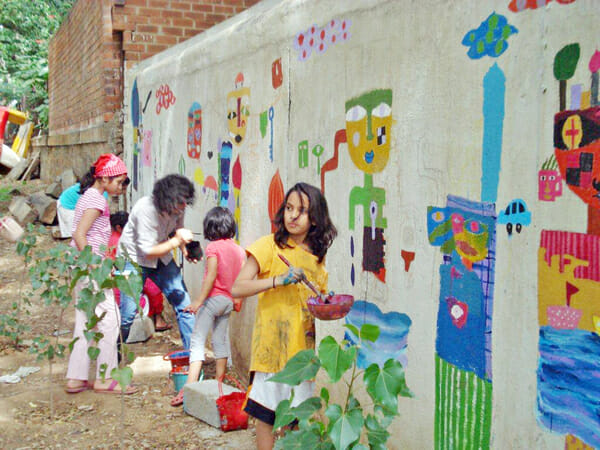 We walked from the Gloria Jean’s Coffee shop into Indiranagar’s Defence Colony. A short walk into the colony and we arrived at the colony park. The bright and colourful wall immediately caught my attention and forced out a little gasp of surprise.

Namrata explains how this came about: "Defence Colony residents had been working on clean-up drives for our neighborhood with the help of the Ugly Indian. I really wanted my kids to be involved so they could see that even in a country like ours, where people are constantly complaining about dirty streets and filth, there are some things we can do ourselves and not just complain or wait for the government. 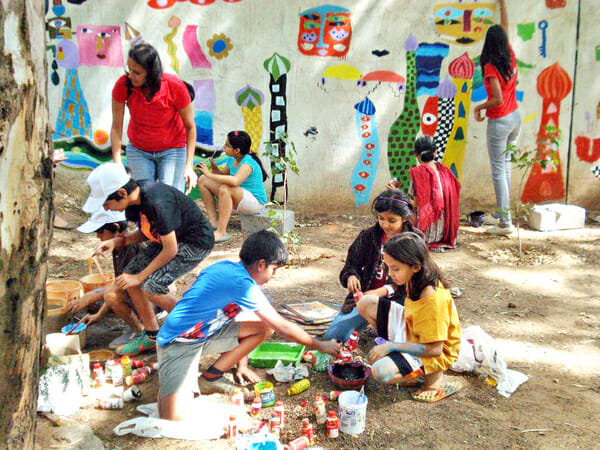 While a lot of kids did help out with the clean-up drives, the work was not always suitable for them. And then it struck me – we had a beautiful children’s park in our neighborhood with a drab peripheral wall and perhaps this is where our children could make a real difference – take their art to the community, have fun doing it and understand what it takes to work together to complete one large community art project as opposed to their individual ones."

So she coordinated with the artist, Nilofer Suleman (who runs an art class for children between the ages of 5-14 in Indiranagar), and with the help of around 30-40 kids and many cans of paints – the drawing and painting began in earnest. The Defence Colony Residents’ Association (DECORA – what a lovely acronym!), manages the Children’s Park and supported this initiative in many ways, including funding most of the art supplies. 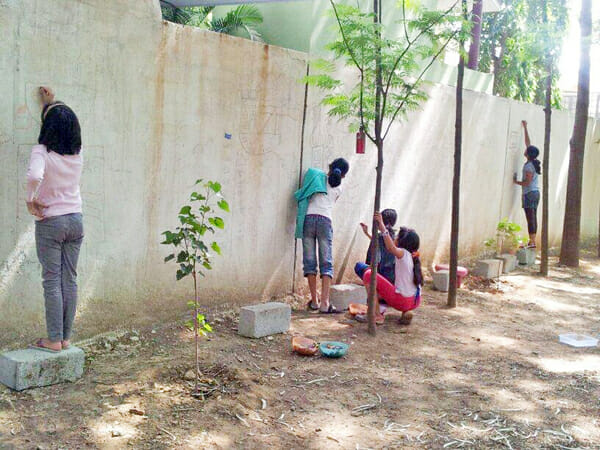 The final result clearly shows the concerted effort of many hands and minds, albeit with a unifying theme running through. The effect is pleasing and vibrant. It does not look as if it’s a haphazardly executed art project put together with an ‘anything-goes’ attitude. At the same time, the wall art miraculously brings out each person’s individual creativity and is clearly not just one artist’s masterpiece.

From what Namrata tells me, it was fun and fulfilling for all the people involved, and finally turned out to be a wonderful gift for the Defence Colony residents and their visitors. The project also shows what can be achieved through community involvement and individual commitment. 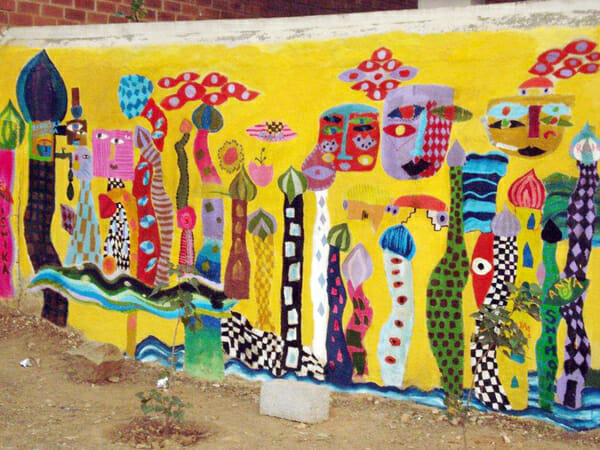 But my curiosity was yet to be sated and I wanted to know more about how all of this was managed and executed.

The first thing that needed to be done was to run the idea by key stake-holders – the residents, the art teacher who would guide the young brigade and the DECORA executive committee who would be funding the project. It was important to be assured of the commitment of everyone involved.

Next, a resource plan was made for the project, outlining the people, supplies and funds required. 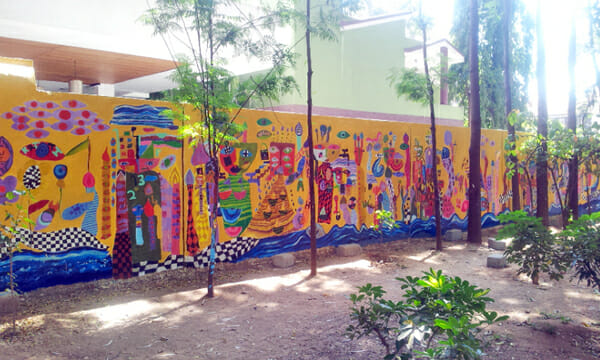 The artists, Nilofer and Shilo, were consulted to determine actual requirements for the art work – how much paint would be needed, what kind of paint, how much time should be allotted. Interestingly, Namrata reveals that all the initial estimates were overshot!

Supplies for the whitewashing and painting activity were purchased and preparations made at the park. For example, the wall had to be cleaned and whitewashed by the DECORA group before the painting could begin. In this activity of cleaning and whitewashing, the children and other adults lent a hand too, and were thus able to hasten the process.

Approval for funding was taken from DECORA and support requirements on the ground had to be arranged for – volunteers for snacks, safety and those who could help with hard-to-reach parts of the wall.

Parents had to be informed about the activity and their help was sought – for ferrying the kids back and forth from the art class as well as managing them at the site.

After every weekend of activity, it was necessary to identify what more would be needed in terms of supplies, funds and people – and to keep parents and children informed to help finish the work.

The project took up approximately 5 days (over weekends) where a lot of kids worked on the project and a further 2-3 days when adults worked on the background and the touching up and the varnish to protect the work.

Of course, a project of such nature couldn’t be as easy or as smooth as it sounds. Trying to coordinate with the various contributors was the toughest challenge, says Namrata. Nilofer Suleman and her daughter, Shilo, are both busy artists who have their own exhibitions and projects to work on, so getting Nilofer to actually set aside some time to guide the children as they painted was one of the pieces that had to be put in place. At the same time, the children had to be available on weekends and free from the pressure of exams. So, a project that was first conceived of in August 2012, was started on Dec 16 and then took a month to complete.

About halfway through the project, realization dawned that the paints that had been used were water-based and could be washed off in a single shower. At this point it would have been impossible to start over with water-proof paints and there was a scramble to figure out the best possible way to preserve the art. Many phone calls and consultations later, a solution was arrived at using the expertise of various professionals – the parents of children – who lived in the colony. However, even after the solution was found, the organisers and all others involved spent a couple of sleepless nights, praying that there would be no rain until a layer of varnish could be applied to the painted wall.

I was fascinated by all of it. There are many who, when gripped by a passionate idea, jump right into it without wasting precious time on planning. This could end in a hit or miss. Whether it is a large project involving lots of money and resources, or a small project, it needs to be treated with due respect and must have enough thought and planning put into it. Then there are others who start planning and discover that there is huge preparation and hard work involved, so that they lose steam and give up on the whole idea. But here was a project that was carefully thought-out, planned and seen through to fruition.

I, personally, appreciate projects that are planned and also have a creative element. Just because art requires creativity, I would not agree that you can let children run amok and paint anything on a public wall. At the same time, the process and rules should not be so stringent as to kill t
he enthusiasm and creativity of young talent.

Says Namrata, "This project opened up a process of discovery and learning at multiple levels for each of us – from understanding what it takes to embark on and complete such a project to managing every hurdle we came across at different stages. Each time we looked at what the kids had managed to do, it just inspired us all to figure out a way around every problem."

Now that the project has yielded a step-by-step guide to beautifying a community spot, Namrata hopes that others will also take the initiative and brighten up their own neighbourhoods. As she observes, "Painting on a wall is every kids’ dream (and I suspect, every adults’ as well) and beautifying a drab spot makes people reluctant to dirty it again."⊕

About Lalana Zaveri 4 Articles
The author has not yet added any personal or biographical info to her or his author profile.

16 schools battled it out on the football ground. A Bengaluru school won it by a single penalty goal. All the action from the inaugural Equality Cup of the Parikrma Champion Football League.