It all started with a few pair of shoes. Four retired men sitting together saw a group of schoolchildren pass by barefoot and decided to give shoes to them. One thing led to another and soon they were helping out local schools in looking after the health, nutritional and academic needs of children and had formed an NGO called Senior Citizens Bangalore. Launched in 2001 by the late Romesh Khanna, also the founder chairperson of Special Olympics India, the group has today grown from four to almost over 40 members and is located mainly around Indiranagar in Bangalore. 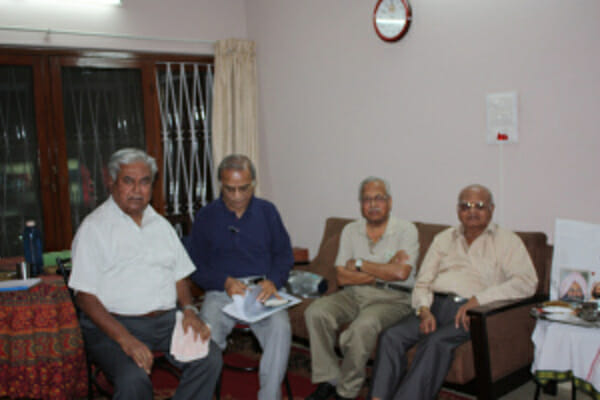 Primary activities
At present, the group helps almost 1700 children, and has identified about eight schools in Indira Nagar and surrounding areas that cater to needy kids. Once they started working with children, the members of the NGO realised that many of the youngsters went to school, hungry. The elders have been instrumental in facilitating an Akshay Patra midday meal scheme through which the children also get breakfast. "It is a nutritious mix of Ragi and jaggery," says their chairperson Bharat Sarronwala, whom this writer met along with the president of the group Colonel HMS Murthy and executive committee members Brigadier (retd.) Balasubramaniam and U. V. Rao. They add that introducing the breakfast has resulted in not only an improvement in the health of the children but also in their attendance.

Another core activity of the group is to get annual health examinations done for the children, especially for their eyes and teeth. "If any problem is diagnosed, we handle further treatment," says Brigadier Balasubramaniam. Senior Citizens Bangalore also provides an annual scholarship to deserving students and has provided computer training in all the schools they are associated with. One school also has an audio-visual classroom aid. Some of the volunteers from the group also provide training in English to the children.

Different members of the group and their families contribute in several ways. Sheela Murthy, a US based lawyer and the daughter of Col. Murthy has donated over 10 lakhs, while children and relatives of other members too have donated generously. One member visited a school aided by the group and personally designed 60 benches for children in the classrooms. Another has donated an office space absolutely rent free. Some members have spearheaded educational campaigns, while others have lobbied for corporate sponsorships and got their former employers to donate generously.

The seniors
Senior Citizens Bangalore consists of an executive committee of 13 members, most of whom are extremely active. The other members chip in voluntarily as and when required. Annual membership fees is Rs. 4000. They "pass the hat around" for different causes off and on, an instance being the North Karnataka floods. The group has also been helping out a home for the destitute in Hennur. While membership is open to all, people under the age of 60 years can become associate members. With an average age of 75 plus years, it is amazing to see how much community service and social empowerment the members of Senior Citizens Bangalore have been able to achieve. Each of them has retired from distinguished careers, with many of them having defence services backgrounds. While the need to give back something to society keeps them going, it also fosters a sense of fellowship they derive from each other, says Col. Murthy, in whose house Silver Talkies met the group. "Most of them are passionate about the cause", says Rao, adding that Ramchandani, a former colleague of his, attends every general body meeting in a wheelchair. Many other members turn their anniversary and birthday celebrations into fundraising drives!

With scholarships awarded every year and more in the offing, nutritious food for children, computer training, medical checkups and other help, members of Senior Citizens Bangalore have dipped into both their pockets and hearts to support the causes they are keen about. In short, an example worth emulating in every possible way. If you wish to be a part of the group or contribute in any way, contact them on 080-25280757 or visit their website.

The movie was seen as a response to contemporary society in a discussion that followed the film’s screening.

The Avengers could have done better

It is one of the most anticipated movies the year. The first superhero movie of the year that incorporates plenty of action, witty dialogue and destruction.