Senior citizens of Brigade Millennium apartments took the lead to organise the much needed Aadhaar Camp in our enclave with Mayflower flat’s lobby as the venue between January 4th and 20th.

The residents, under the umbrella of ‘Elders Forum’ contacted UID officials, who pointed them to one of their contract agencies, Mars Systems. Since there were 800+ apartments, the residents found it convenient to organise a camp. Resident volunteers coordinated each block and allotted specific timings for enrollment. They could also ensure domestic help and drivers employed in the complex could register.

The UI camp was conducted in a spirit of team work by several elders of our enclave. The five apartment owners associations in the complex, provided excellent facilities including staff support to this community endeavour.

More than 1600 residents from these blocks (around 98% turnout) and some staff benefited immensely with such a facility at their doorstep.

UI enrollment centres have been opened across the city at banks and post offices. For addresses, see: appointments.uidai.gov.in/easearch.aspx

The Espirit de Corps was further exemplified by N R Veguswamy aged 102, a resident of Cassia block who came for enrollment along with his son, Jayaraman aged 69, grandson Anand aged 38 and great-grandson Abhinav aged 3! 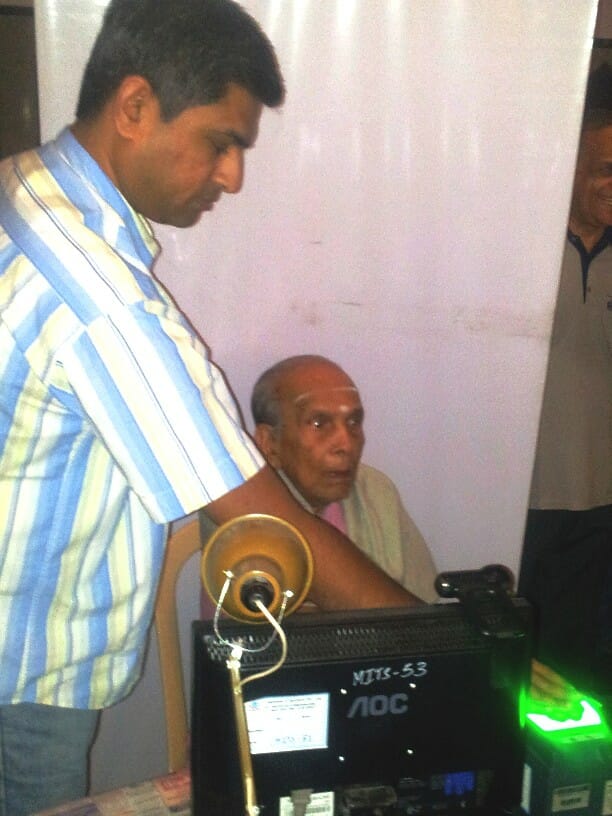 This definitely is an unique and proud moment for all living in this enclave. Perhaps it is also a record in Bangalore. It was delight to see Venguswamy walk straight from his flat without even a walking stick and take his position behind the camera.

This act of our centenarian neighbour is a testimony to his exploits in his younger day exploit when he had to trekked all the way from Rangoon (Burma) to Calcutta in 1938, to escape being captured by the enemy forces.

About Ramaswamy OP 2 Articles
The author has not yet added any personal or biographical info to her or his author profile.

This personal appeal beseeches residents of apartment complexes to respect restrictions on the entry of domestic help, cooks, drivers and visitors.

Shail Pandey recounts her experience on a wheelchair at Bangalore airport.