After days of demolition and threats by the police, some 150 residents still remain in the quarters. Even as the police and BBMP officials are forcing them to move out on Republic Day, Maverick’s bulldozers are busy flattening the space. 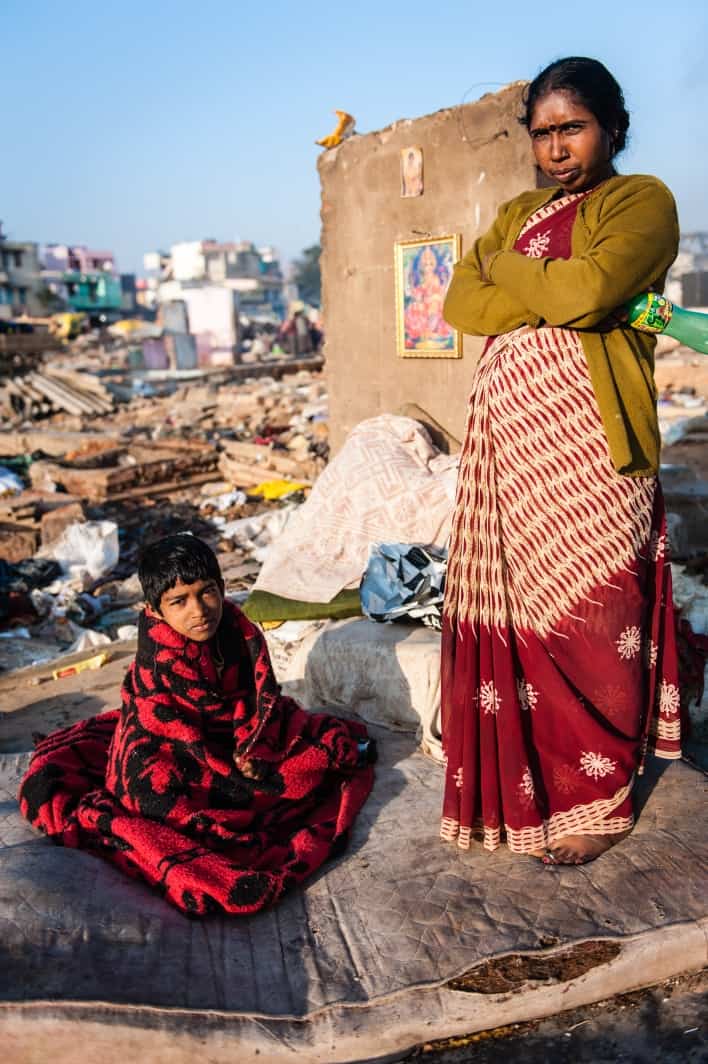 Maverick’s representatives are reportedly giving Rs 5000 to the residents to encourage them to move out without fuss. These are people who have not found a house at all, or have not been able to pay the full advance amount for their new houses.

Elizabeth, over 60 years old, lives alone and has not been able to find a house yet. Her husband is no more, she has health problems, and she does not know how to find a house. “Some people who came here for relief work have agreed to take me to a hostel. It is not finalised, but they said that I can stay for free.”

Some women, who work as domestic help, have managed to get houses with their employers’ help. After much begging and pleading, their new house owners have agreed to take just Rs 15,000 or Rs 20,000 as advance.

D Patrick and Lokanath have both found new houses in low income neighbourhoods, but are unable to shift as they could not pay the full advance. Patrick has found a house near Viveknagar, for monthly rent of Rs 2500. While the advance amount is Rs 30,000, he has been able to pay Rs 15,000 only. He has asked for a week’s time to pay the remaining amount, and can move in only after he pays up. “I have moved some of our things there. But we are still in the EWS quarters site as we cannot go to the new house yet.” Patrick lives with his wife and ailing mother.

Lokanath who works as a painter and his family is also in the site, as he has not paid the full advance amount. Out of Rs 25,000 advance, he has paid only Rs 15,000 yet for his new house in Rajendra Nagar, Koramangala. Monthly rent here is Rs 3,000. Patrick and Lokanath had been staying on rent in EWS quarters, and do not have a guruthina chitti (ID card) from BBMP or biometric card from Slum Board.

While donors are giving financial help upto Rs 10,000 to each resident for advance payment, there is a strict verification process. Millath Relief Trust is distributing money. Only those who own biometric cards are given the amount. Hence people like Patrick and Lokanath have not got any financial help yet.

Sumit Negi of Aam Aadmi Party, who is helping with the distribution, tells Citizen Matters that genuine cases would be considered even if there are no biometric cards. AAP says that 300 families have got the money so far.

To donate, please contact Millat Relief Trust or Aam Aadmi Party at aap.karnataka@gmail.com or 8095435393 (Sumit).
Note:Citizen Matters has not independently verified the organisations involved and we are merely passing on the information received from the organisation and individuals.

The financial help is also given only once the families have found new houses. Money is given directly to the landlords. Yasmeen says that she has not been able to find houses with advance lower than Rs 40,000, which she cannot afford. Hence she has not reached out for financial help, and still stays in the quarters land. The houses that Yasmeen found so far, are in other slums. Since there is a danger of being evicted from those houses too, she has decided not to move in there.

Workers want companies which usually supply to big brands, pay them arrears worth 1800 crores, as per the state government’s draft notification on wage hike.

A senior citizen and his family lost their home to the NICE road. This is the story of his relentless fight for justice.

What’s up with the MLC elections?

Citizen Matters brings you the latest on the upcoming election for the Bangalore graduate constituency. How to register? Who is contesting? When is the election?