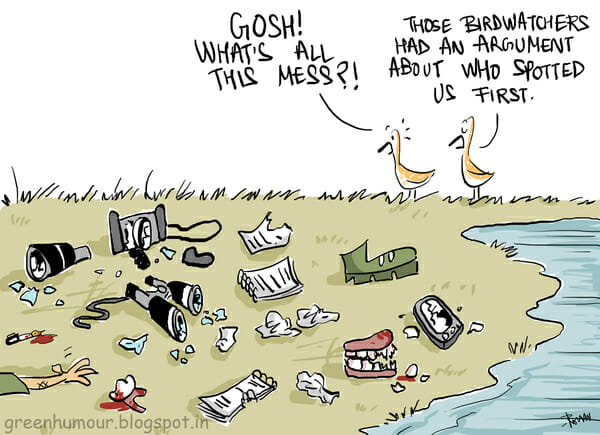 Bird Race time again! Or to be more precise,
The HSBC Bangalore Bird Race is what it’s known to the wise.

As soon as the registration was declared open,
Thirty-six teams registered, every person hoping
That he or she would be the one to sight so many birds
That "You’re the best!" would be the judges’ appreciative words.

The Bird Race team consisted of a lot of names with S’s…
Srihari, Subbu, Sunjoy, Swarna..to sort out all the messes
And successfully stage the event.
Thanks to their work, it all went
Smoothly, with sponsorship from HSBC…
A day of being in the open air, sighting birds happily.

One team dropped out, alas…
But, in spite of that, there was

High enthusiasm amongst the rest.
At dawn, they fanned out north and east
To partake of the birding feast

They also travelled south and west
To make sure they were the best.

Over hill and dale they went
As the "hunting parties" spent
The day near water, near grass, under trees
(A team can tick only what its member sees.)

A surprising thing happened this year…
Something that will bring great cheer
To each and every birder’s heart…
Seven teams decided they’d bird, together, not apart.

Of these, one had to drop out, and the other
(Three young men, a daughter…and a father
Who’d performed surgery till the early hours)
Started late… but used their powers
To ultimately win the race,
And accept first place with a smiling face.

The second-placed team, led by Mr Jagirdhar
Wandered over the city, near and far
Managed to get a hundred and forty…
Enough reason for Bangalore birders to party.

The third prize went to Team Black Stork;
They did not have to do too much work.
Between breakfast and lunch, snacks (and jokes) and chai
They sighted birds, looking low…and high.

Ibis, Falcon, Spotted Owlet and Ruff
Got several birds…the number was enough.
All the other teams, also, enjoyed
The day very much and filled the void
spaces on their list of birds.
With common names or scientific words.

Whether they saw just one or a flock
They’d seen enough by five pm on the clock
To satisfy them at the end of the day
As they made their way to Alliance Francaise.

Several Green Teams went walking or by bus
And got their sightings without any fuss
Kaadu Goobe was the team with the most
Birds seen…However, the host
Of other birders "racing" this day…
To Vasanth Nagar they made their way.

The judges, Dipu, Shreeram and Karthik
Carefully identified every click
That the birders brought them, and did the sums.
They weeded out the doubtful ones.

Prizes were given away to the teams.
Then dinner, till each was bursting at the seams
Happy and tired, all then dispersed
They’d all won even if they’d not come first.

Hoping to be, again, in the next Bird Race
The community of birders parted ways.

Plastic can be dangerous in many ways

Let’s be very careful what we throw away, and how we dispose of plastic.

With new options for online grocery shopping, does the net-savvy Bangalorean prefer this to waiting in queues? What are the new offerings and how are they affecting your corner kirana store?

In their early twenties, these young fresh-out-of-college women have ventured out on their own to start some unusual enterprises. Meet the faces behind ‘So, What Now?’ and ‘Cutlet Co’.