"We’ve waited 16 years and it’s with several attempts that we’ve been allotted the site. We’ve also also availed of bank loans for construction of houses and have been regularly paying property taxes to BDA", was an appeal made by a plot owner to the then chief minister B S Yeddyurappa. This appeal was made by a number of BDA site allottees in December 2010, requesting Yeddyurappa to cancel denotification of the land on which their sites stood, in JP Nagar VIII phase.

Bangaloreans swear by BDA sites and it would not be an exaggeration to term it as an aspiration for many to own a BDA site. If you are cheated of property by a private party you have the government and the law to turn to. But if you have to stand up against the chief minister itself then you could be assured that it’s not going to be a ‘happy ending’.

In a report released for Karnataka last month, the CAG (Comptroller and Auditor General of India) has documented cases of illegal and irregular denotifications of land acquired for layouts by BDA. In all cases mentioned in the report, BDA has had to give in to the powers of the ruling state government and suffer huge losses. CAG reviewed cases of irregular denotification by successive governments of Karnataka between 2007-12. In the same report, CAG also exposed the wrongdoing at BDA and the state government on Civic Amenity (CA) sites in Bangalore.

The CAG’s indicting report has documented case after case of formerly acquired land being returned to original landowners through wrongful use of the denotification process by chief ministers B S Yeddyurappa and H D Kumaraswamy. The returns have happened after BDA has often developed the land into a layout, allotted sites to citizens, and roads laid. Once returned, the original landowners have turned around and sold the land.

During the first week after the report came out in December, city dailies carried several individual stories. This Citizen Matters story on the CAG’s denotification expose is an in depth look at what the CAG found out. In the process, we illuminate the so-called ‘denotification’ process, which was much in the news when former Lokayukta Santosh Hegde went after former Chief Minister B S Yeddyurappa.

Denotification of Land by Government and Allotment of Site by BDA, 2012

To understand why the CAG has called this illegal, irregular and plain wrong, a little explanation on the land acquisition process and the government’s use of its notification and denotification powers is necessary.

‘Notification’ is part of the acquisition process. It begins with BDA identifying a piece of land and submitting its proposal to develop it (for public purposes, like a residential layout) to the state government for its approval. With the government’s sanction, the district’s Deputy Commissioner (DC) makes the required compensation for the land after hearing objections, if any, from all persons interested in the land. The DC also ensures that land is clear of all court cases if any (Section 11 of LA, Act).

At this point, the land stands ‘notified’ and is regulated by the LA Act. BDA has now taken possession of the land. BDA is the final authority on the land, and the law protects this. After notification, the government cannot reclaim the land or the land cannot be returned to the original land owners even if the land is not used for public purposes by BDA. BDA retains final ownership.

Subsequent to this, section 16(2) of the act requires the Deputy Commissioner to notify in the official gazette the fact of such taking possession. However, note this: the government cannot quote the non-fulfillment of this section in order to reverse the acquisition proceedings. In any event the scope of notification under Sec 16(2) was to recognise that the land had been acquired and possession taken and thereby vesting of the land in the government was complete, i.e., there was formal closure of the acquisition process. This is the crux of the matter in many of the cases of wrongdoing the CAG has found.

Denotification of land means that the government can withdraw the acquisition proceedings and the land returns to its former owner. As per law, this needs to happen before the DC awards the compensations and announces the change in ownership of land to the BDA.

In addition, denotification decisions are taken through a ‘denotification committee’, which will investigate the case and advise the government on the steps to be taken.

The CAG has pointed in its analysis that as per law, denotifications cannot happen after acquisition has proceeded and land ownership has been vested in the BDA.

What successive chief ministers have been doing

The CAG has exposed that though the state government had constituted a denotification committee for every case in and around Bangalore, the government went ahead and denotified land measuring 610 acres and 16.5 guntas during 2007-12 without referring the cases to the committee.

Not only that, it gets worse. In seven cases, the state government irregularly denotified 16 acres and 15.2 guntas in four layouts between October 2007 and September 2010 after land had been taken possession of and developed by BDA. "These denotifications had been to follow orders of the incumbent chief ministers who disregarded the well settled law that land, once taken possession of, could not be denotified", says the CAG in its damning report.

There’s more. The CAG exposed that in three of these cases, denotifications had been done in layouts where sites formed on the denotified land had already been allotted to the general public. In four cases, the denotified land was subsequently sold to other persons. This is "subversion of the acquisition process culminating in the denotifications had been done only to facilitate the sale of the land acquired for public purpose", says the CAG.

The nation’s supreme auditor did not stop there. CAG took the trouble to classify the government’s illegal decisions further.

In six of the seven cases denotification happened within a short span of about 1-3 months. The speedy process meant that the credibility of the parties (previous landowners) in whose favour the denotification was done or the reasons for denotification were not duly investigated, says the CAG.

In four of the cases the landowners sold their land to other persons, almost immediately after denotification.

In four out of seven cases, the CM demanded and issued denotification order stating non-compliance of section 16(2) of the LA act. However the law itself makes it clear that section 16(2) is only a formality and has no legal bearing with respect to possession of land. I.e., the chief ministers’ use of non-compliance on a formal clause, even though acquisition was completed, and land transferred to the BDA,
was found malafide by the CAG.

Develop the land with public money, then return it!

Former landowners submitted representations to the chief minister requesting for denotification in 6 out of 7 cases, nearly 7-10 years after BDA legally acquired land (passing of the section 16(1)). In effect, the denotification handed over the developed land with facilities like electricity, roads, water connection etc put in place by BDA, back to original owners.

CAG has been very detailed and legal in expose in the report. The choice of language has been clear. "Once land notified for public purpose has been taken possession of under Section 16 (1) of the LA Act with the recording of a memorandum or Panchanama by the Land Acquisition Officer in the presence of witnesses signed by him/them, the Government has no powers to withdraw the acquisition proceedings under the LA Act, even if publication under Section 16 (2) had not been issued", says the CAG.

In effect it has termed all the returns of lands in the cases it has investigated as illegal and unlawful.

BDA’s process of layout formation and the Land Acquisition Act

The legal framework provided by the BDA Act for acquisition of land for developmental schemes is shown below:

Sec 15: Vests power in the BDA to draw up a Development Scheme for the development of the Bangalore Metropolitan area.

Sec 17: When a development scheme has been prepared, the BDA is to draw up a notification (preliminary notification) specifying, inter alia, the land which is proposed to be acquired and the land in regard to which a betterment tax may be levied.

Sec 19: Upon sanction of the scheme, the Government shall publish in the official Gazette a declaration (final notification) stating the fact of such sanction and that land is required for a public purpose.

Sec 27: Where within a period of five years from the date of the final notification, BDA fails to execute the scheme substantially, the scheme shall lapse.

Sec 36: The acquisition of land under the BDA Act shall be regulated by the provisions, as far as they are applicable, of the Land Acquisition Act, 1894 (LA Act).

After publication of the final notification under the BDA Act, the acquisition will be governed by the provisions in the Land Acquisition Act, 1894 (LA Act).

The following provisions in the LA Act deal with the subsequent stages of acquisition of land by BDA.

Sec 11: Requires the Deputy Commissioner to make an award of compensation for the land acquired after hearing objections, if any, from all the persons interested in the land.

Sec 16(1): Empowers the Deputy Commissioner to take possession of the land after making an award under Section 11 and the land shall thereupon vest absolutely in the BDA, free from all encumbrances.

Sec 16(2): Requires the Deputy Commissioner to notify in the official Gazette the fact of such taking possession. 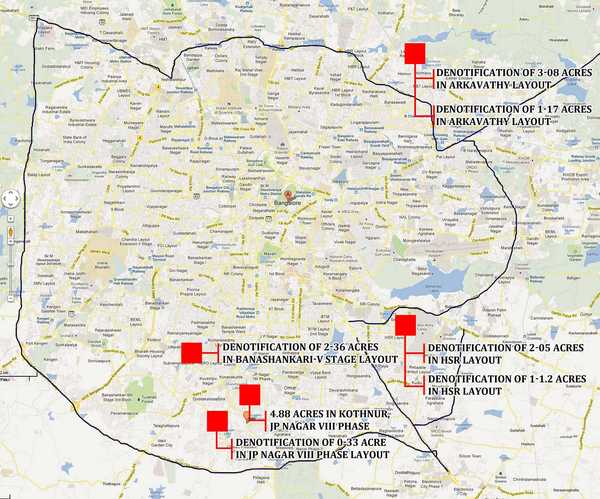 CAG had placed its report before the legislative assembly, at the winter session in Belgaum held on December 5th-13th. Opposition parties – Congress and JD(S) – had demanded that the session be extended by a day to discuss this report and other issues. But Speaker K G Bopaiah had turned down the request, and because of this Congress and JD(S) had boycotted the last day of the session.

What you can do about building violations in Bengaluru

Hundreds have died in building collapses in Bengaluru, yet structurally unsound buildings come up newly everyday. If you come across a building violation, here is how you can take action