After several months of uncleared garbage raising a stink in the city, Bangalore seems to be having a brief respite from it. The new Bruhat Bengaluru Mahanagara Palike (BBMP) Commissioner H Siddaiah has been working to find a solution to the issue that has been affecting the city. However, the Commissioner is well aware that the respite is only temporary and that the Palike cannot rest easy till more permanent solutions are found to manage the estimated 3,500 tonne waste generated in the city. He was speaking at a symposium titled "Solutions to impending public health crisis through governance in Solid Waste Management (SWM), organized by the Namma Bengaluru Foundation (NBF), that is focussed on city issues and Adamya Chetana, a Bangalore-based NGO, on 13 January. 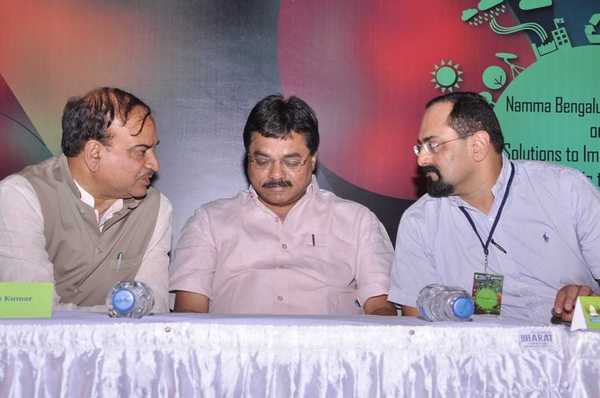 Siddaiah assured that he would strive to find a solution to the waste management but stopped short of announcing any concrete measure that will be take to tackle the issue. "The residents of Mandur and Mavallipura have made it clear in no uncertain terms that they will not allow us to dump anymore garbage in the landfills in their villages. We are doing our best to find an answer but we cannot come up with a fix overnight," he said.

As fingers were being pointed at the BBMP from all quarters, Siddaiah candidly accepted the blame. "I cannot deny any of the charges levelled against us. Yes, we have failed the city. I can only say that I will do everything I can to find a solution. I will start that by trying ease the problems of citizens from Mandur and Mavallipura as they are being affected through no fault of their own," he said.

Every speaker stressed on the need to segregate and process solid waste within the city and not depend on landfills elsewhere. Siddaiah rued the lack of space within the city to create centres where organic waste can be collected and composted. "We do not need a large amount of space for this but every place we intend to set up such waste collection centres, citizens object to it and ask us to not set them up in their neighbourhoods," he said.

Speaking about the 11,500 bulk generators that the BBMP has so far identified, Siddaiah stressed that if they are willing to take manage solid waste themselves, he would be willing to eliminate garbage cess levied on those communities.

Dr Vaman Acharya said that too lamented the lack of space to set up waste processing centres. "We have so many companies coming forward with proposals to set up waste processing centres but are not able to find suitable spaces close to the city to set up such units." It was his subsequent remarks that elicited loud applause from citizens in the auditorium. "Nearly all the politicians present here have amassed thousands of acres after they have come into power. Can’t at least a few of you donate a few tens of acres to solve this issue? ," quipped Vaman Acharya.

The question and answer session held at the end to allow the public and the media to interact with the panelists saw questions than answers. Jagannath Shetty, 65, a resident of Vajrahalli on Kanakapura Road, said, "I had come here to vent my frustration against the officials but looking at them bickering amongst each other, there doesn’t seem to be any point in saying anything. I was hoping to find solutions to my problem, though it doesn’t look like I will get any," he said."

The interaction was meant to draw attention to the long term impact of the status of the garbage (mis)management especially on health with the risk of epidemics increasing.

Sudhakar Varanasi, from NBF, says there is a need to look at the space with a larger city-level perspective, given that the reasons for the crisis and appropriate solutions have been already proposed in various fora, and even in the court.

NBF also hoped that citizens and activists use this platform and other such future ones, to ask hard questions of the people in power. However citizens were more focussed on highlighting the basic flaws in the system.

Perhaps, it is because the tiresomeness of the day-to-day problems. Varanasi hopes with more such events, stakeholders will also follow with the next steps. He concludes, "it is a continuous process of citizen engagement, along with experts and authorities, more people need to come on board."⊕

Even as the controversy about the forced eviction of residents of the EWS quarters in Ejipura is yet to die down, another 97 families find themselves in danger of being displaced because of the project.

Randeep said solid waste management in Bengaluru was a constantly evolving challenge, addressed only by citizens taking ownership of their waste and partnering with local agencies to treat their waste.

Priority lane buses get brand name and logo, establishments to ensure 60 percent Kannada in display boards, heavy rains lash south and west Bengaluru – read more on what else happened in the city over the past week