After the disappointing 7 Khoon Maaf, Vishal Bharadwaj makes amends with Matru Ki Bijlee Ka Mandola. With this film, Vishal Bharadwaj lives up to his previous cinematic work that includes Ishqiya, Kaminey, Omkara, Blue Umbrella, Maqbool and Makdee. But the subtle humour that we saw in earlier work like Ishqiya and Kaminey now moves into a fullblown political sattire. It’s a new genre for Bharadwaj, and he makes the transition gracefully. 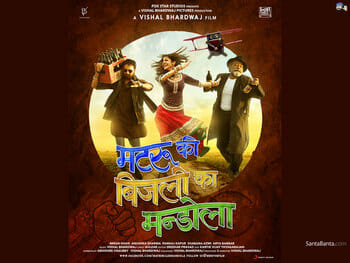 When Matru Ki Bijlee Ka Mandola works, it does so because it is a film that runs at many levels. At a most basic analysis, Matru Ki Bijlee Ka Mandola is a lighthearted romantic about a possible developing love story between Matru (Imran Khan) and Bijlee (Anushka Sharma). Adding spice to the plot is Bijlee’s alcoholic businessman father Mandola (Pankaj Kapur) and the powerful politician Chaudhari Devi (Shabana Azmi). Bijlee must marry Chaudhuri Devi’s son Baadal (Arya Babbar) for their political and business legacy to survive.

But at a deeper level, this is also a satirical comment on land movements and the nature of political power struggles in rural India. Reminiscient of Peepli Live at times, this film takes us to the ‘other’ India that is gradually disappearing from celluloid.

The film has also achieved a casting coup of sorts, and the actors add a third dimension to this film. After their collaboration in Maqbool and The Blue Umbrella, Bharadwaj and Pankaj Kapur create another memorable character in Mandola. So, Bharadwaj seems to repeatedly sketch out roles that lure Pankaj Kapur to return to celluloid, and he more than responds to the stimulus. In her second film with Bharadwaj after Makdee, Shabana Azmi also rises to the occassion, embodying the persona of the sinister Chaudhari Devi.

Anushka Sharma continues to experiment with different kinds of cinema. But her effervescent exuberance is not too different from earlier films like Jab Tak Hain Jaan. The film’s big revelation remains Imran Khan’s smouldering presence. The actor chooses his films with care, and Matru Ki Bijlee Ka Mandola remains his finest performance yet.

Bharadwaj’s musical score does not fail to disappoint. But the film’s only weak link is patchy editing and a sometimes longwinded screenplay that gives the film a rambling quality.

Yet for its telling social commentary and sense of laughter, I will go with a rating of 3 stars for this film. Go watch!  It’s entertaining cinema that adds a new dimension to Vishal Bharadwaj’s fim-making.

1: Watch this film only if the director pays you
2: You could safely give this film a miss
2.5: A one time watch
3: Good cinema. Money well spent
4: Great cinema. A standing ovation
5: Simply speechless. A masterpiece

A photo essay on Avenue Road, well known to book lovers in the city, that authorities plan to widen shortly.