Damned if you do damned if you don’t. That’s the dilemma the high court judges, hearing petitions against the recently passed Karnataka State law on regularization of illegal constructions, seem to be in. The public interest litigation (PIL) filed by citizens’ groups from Bangalore and Mangalore seek an injunction and stay against the Sakrama scheme devised under the new law and being implemented by the administration. 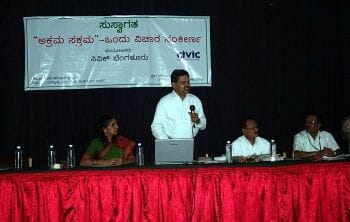 Sakrama in discussion at the 1 December meeting organised by CIVIC. BBMP Special Commissioner Ramprasad is speaking.

"If the amendment is not stayed, violators will get amnesty. But if we stay the amendment, small violators will continue to be exploited," a Division Bench comprising Chief Justice Cyriac Joseph and Justice Ashok Hinchigeri, observed, while hearing the plea on 4 December in Bangalore. The judges observed that it is in a dilemma over passing any orders. It wanted the State to take a relook at the scheme and asked Advocate-General B V Acharya if the deadline under the scheme could be extended.

On 11 December, the High Court of Karnataka stayed the implementation of the Sakrama scheme. See the update at the end of this report for more.

Advocate-General Acharya informed the court that since the scheme had been passed by the state legislature and as there was no elected government in the State at present, it was difficult to amend its provisions or extend the deadline. The Chief Justice then remarked that it would be better if the High Court desisted, at this point of time, from passing any orders on the scheme as it would complicate matters and adjourned further hearing on the case to December 10. (At the time of writing the hearing was postponed again to 11 December.)

What is this scheme?

The scheme is based on the Karnataka Town and Country Planning (Regularization of unauthorized development or constructions) Rules 2007 and seeks to give legal status to all those who have knowingly or unknowingly violated the law applicable to development or constructions in the state. Violators of the building bye-laws can now get a "regularised" status by paying a "one-time" penalty to the government. The law also sets limits as to how much and what types of illegal development and constructions can be regularized.

Download the Sakrama Rules, Amendment and handbook from BBMP online.

Similarly for non residential structures the slabs for violations are 12.5 per cent and from 12.5 to 25 per cent. The penalties respectively are 25 per cent and 40 per cent of the market value of the part built in violation of the rules and as determined by the Karnataka Stamp Act.

The Sakrama scheme has thrown up many interesting questions pertaining to the rule of law, ethics in governance and use of legislation in corrective action.

What’s been the motivation to bring such a law? The law itself appears to an attempt by the state government (former) to pre-empt a sticky political situation like that in New Delhi when the Supreme Court ordered large-scale demolitions of illegal constructions and subsequent protests by all those affected.

On the face of it, the Sakrama scheme penalises citizens for illegal constructions and development. However it does nothing to fix accountability and take action against corrupt civic officials, politicians and builders. In many cases, as in apartment complexes and private layouts, citizens may actually be victims rather than perpetrators of the deviations.

A pandora’s box of issues

Moreover, what about those who stuck to the rules and did not break the law? Does a one-time penalty on the guilty suffice to correct the injustice done to this category of citizens whose errant neighbours may now continue to enjoy a larger built-up area by legitimising their deviations?

The scheme also puts a question mark over the various clearances that the civic authorities issue for new constructions and development. Since those seeking amnesty under this scheme includes those who have obtained all these clearances including the Occupancy Certificate (OC), does it mean that these certificates have no meaning? Moreover, what about the money that the government collects under various heads like water, electricity, registration, etc.? The state government has no right to declare layouts which are paying these fees as ‘unauthorized’, says city-based artist and designer, Rajeev Manikoth, in his post on on Sakrama at www.thevisualidea.org.

"They should have in the first instance NOT granted rights and refused to register or grant any permission including the provision of utilities however basic that might be. This is a case of the left hand taking the money and permitting so called ‘unauthorized violations’ while the right hand is busy formulating schemes to penalize the people," says Manikoth. 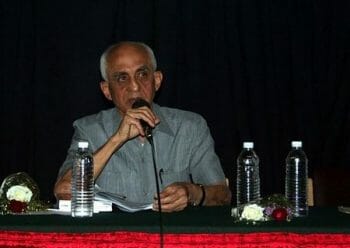 Civic groups have been up in arms against the scheme since it’s been announced. The Citizens’ Action Forum (CAF), a civic action group representing various Residents’ Welfare Associations in Bangalore, has called upon it’s constituents to boycott the scheme. CAF is led by N S Mukunda of the Padmanabhanagar Federation of Residents Welfare Associations. The Forum demanded that implementation of the law be kept in abeyance till a popular government is in place in the state. It laments that the law had been pushed through without any consultation with people and now the administration is in a hurry to implement it when both the elected assembly and the municipal council is not functioning. This smacked of an "hidden agenda", says CAF.

The BBMP, on the other hand, has threatened to take action against those who fail to file their applications under the scheme by the specified date. The Special Commissioner P S Ramprasad, at a meeting called on 1 December by the citizens’ group CIVIC to discuss and debate the law, said that the civic authorities would have to take action against people who don’t take benefit of the scheme, including having their water and electricity supply disconnected.

Ramprasad did admit that civic authorities are also guilty of lapses when such illegal development is taking place. Presenting some examples, he regretted that there are limits to what action can be taken on erring civic engineers who abet illegalities. To repeated queries on why only citizens have been penalized while the others let off, he retorted, "you cannot have the best of all the worlds, either you regularize or you don’t regularize."

This brings us to another interesting point. Since Sakrama is like a "voluntary disclosure scheme", how does the BBMP hope to identify and take action against those who don’t come forward to apply for regularisation? Won’t it have to rely on the same engineers on the ground who have in the first place abetted these illegalities? There is yet no answer to this other than a paragraph (Section 76FFF) in the amended Act which says that officers who fail to prevent unauthorised construction in his jurisdiction "shall be liable to such punishment as may be prescribed."

Ball in the Court’s court

Finally, is the Sakrama scheme legally tenable? It is the "graveyard of public planning", said former state law secretary Ishwar Bhatt at the CIVIC meeting. "Every Act should be within the scope of the constitution. This Act is unethical and it defeats the constitution," he said adding that "there is no equality under this law" since private interests have been given precedence over public interest.

By many accounts, Sakrama seems to be a shoddy piece of legislation designed to skirt the main issue which is the breakdown of civic administration. So how can the government get out of this mess is the million-dollar question.

Clearly the judges at the High Court are also concerned with this. "What is happening and is the State thinking of something?" they asked the advocate-general while hearing the petition on 4 December. In reply, Acharya asked for more time. But even that is limited since 14 December is the deadline for filing applications to seek compliance under the scheme.

Citizens’ groups say that three months is too short a time to respond to such a significant scheme. Despite the BBMP’s blitz-krieg of marketing and advertisements to bring Sakrama to the people’s notice, not many seem to be aware of it yet. Given the three categories of "violators" under the scheme, "almost 90 per cent of Bangalore" will fall under the ambit of the law, said CAF President Mukunda. So where are the applicants? About 1.5 lakh applications have been sold so far of which 4500 have been received, observed former Mayor P R Ramesh at the CIVIC meeting.

Clearly, things are not looking bright for Sakrama. The scheme has gotten several netizens talking and some have also suggested alternative modes of penalty. "Building violators can be given say one year to demolish/rectify their buildings to conform with bye-laws," says Navin, commenting on a blog in bangalore.praja.in. He reasons that there may be some who may decide not to rectify their violations. For this category of citizens, a stiff annual penalty can be imposed and their property tax hiked up substantially based on the extent of violation.

Thus, such buildings would become unattractive to them to maintain with the violations due to the high charges. "This will spur them to think of either demolishing the building entirely or try to demolish parts of their buildings to stay within bye-laws," argues Navin.

Natural justice does demand that all those who broke the law pay a penalty and ignorance of the law is no excuse. But, equally, it should be applicable to those who abetted the "violations". In fact, that should have been the primary concern of the legislation since letting implementers of the law off the hook is asking for perpetration of a system of anarchy, something the High Court would be examining when they decide on the petitions before them.

Addendum
High court stays ‘Sakrama’: On 11 December, a division bench of the Karnataka High Court comprising Chief Justice Cyriac Joseph and Justice Ashok Hinchigeri stayed implementation of the Sakrama scheme and posted it for hearing on 6 February 2008. CAF President N S Mukunda talking to Citizen Matters said that the court took cognizance of the "strong objections" against the scheme raised by the petitioners and observed that the points raised needed thorough consideration and it would take time to go into the nuances of the law. Since there was no government in the state at present which could change the law, if required, it said that implementation of the law should be stayed till further orders.

Garbage contractors push BBMP to the wall; city in dumps

From August 2011 Bengaluru was supposed to have been served by garbage contractors on a new system of terms and conditions. That never happened, here’s why.

A year ago, ward committee meetings started in Bengaluru. Then why is it that citizens still don’t have a say in the governance of their wards?

Left in the lurch, a third time

A housing project on nearly 16 acres of BBMP-owned land for low-income residents in the Rajendranagar area of Ejipura-Koramangala has sparked off tensions amongst residents there, instead of bringing joy.