In the last few years, quite a few individual residents in Bangalore have installed solar panels on their rooftops, that produce electricity to power their homes. A small number of these people have also connected their solar systems to the BESCOM grid and there are many others who would like to so too.

What is Solar Power?

Photovoltaic (PV) panels are ones in which the main operating elements are semiconductor materials like Silicon. When sunlight strikes these panels, electric power output is created which is Direct Current (DC power), like that of a battery. To run home electric equipments, one option would be to convert home electrical system to DC power. An easier option is to use an inverter to convert the DC power to AC or Alternating Current that powers our homes. 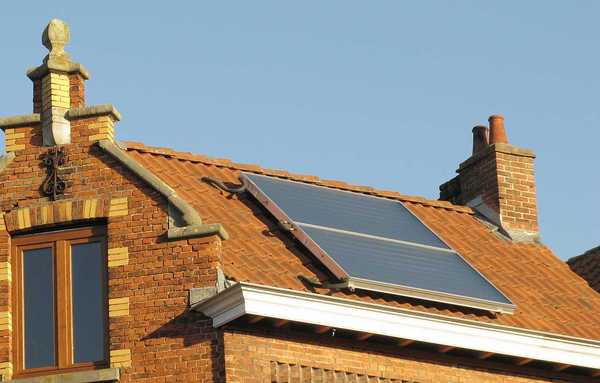 Since solar energy is an intermittent source, a PV based solar power system could produce more power than is being consumed (or less) than required depending on availability of sun. Clearly, at night and in extremely overcast conditions, demand will exceed supply.

One solution is to use batteries to store excess power when available or to bridge the deficit at other times. But batteries are expensive and many of them could be required to provide sufficient storage. Another alternative is to connect the solar system to the electric grid such that excess energy can be pushed back into the electric grid and at other times grid power is used to bridge the deficit between solar power produced by the panels and the demand. A grid connected system is cheaper for the user since the cost of a battery bank can be avoided.

PV prices have dramatically dropped over the recent years. Nevertheless, solar power is still expensive compared to other sources. Despite the higher price, many countries have been looking at rooftop solar in order to reduce their carbon footprint by getting more energy from renewable power. Producing power locally also means that T&D (Transmission and Distribution) losses are smaller. Rooftop solar is attractive because solar is a distributed resource and using rooftop systems reduces land requirements of solar power.

Globally, Germany is the world leader when it comes to the installed base of grid connected solar systems. Several years ago, Germany made a commitment to grid connected solar and announced a very attractive Feed in Tariff (FIT). According to that policy, a consumer could install solar systems on their roof and sell power back to the electric company, which was obligated to buy that power at the announced (FIT) rate. In some other countries, the concept of net-metering was adopted meaning that the meter ran forward when the consumer was using power from the grid and backwards (!) when power was being pushed back. The consumer then pays the net bill at the end of the month. In grid connected solar, the consumer becomes a prosumer (producer plus consumer).

In India, Gujarat state has been the only state to have a solar rooftop policy. A pilot was run in Gandhinagar targeting 5MW of power from rooftop solar. The model there was a little different. Two aggregator companies set up the grid connected PV plants on rooftops of willing building owners. The arrangement was such that the building owner gets Rs 3 for every unit of electricity sold to the grid from the PV plant. The burden of financing and setting up the plant rested on the aggregator company – in this case, Sun Edison and Azure Power. The Gujarat Electricity Regulatory Commission defined a generous feed in tariff of around Rs 11 a unit for a period of 25 years.

BESCOM has been approached by several private citizens as well as other organizations who are interested in connecting their rooftop solar PV systems to the electric grid. P Manivannan, the MD of BESCOM responded and invited citizens to a meeting at the BESCOM offices one Saturday. In the first meeting, due to lack of publicity to citizens, it turned out that I was the only citizen participant. The meeting concluded with a tentative decision to target 10MW of power generation from rooftop solar PV.

Subsequently, a Facebook discussion on this topic got reactions from more people. At a second meeting at the BESCOM office, there was wide participation, with representatives from BESCOM, Karnataka Renewable Energy Development Limited (KREDL), local PV cell manufacturers and EPC (Engineering Procurement and Construction) contractors, research and policy organisations and citizens. This meeting helped in clarifying several important aspects and helped establish ground reality.

BESCOM has a renewable power purchase obligation which specifies that a certain fraction of energy purchased must be generated from renewable sources. Currently, BESCOM is able to meet such obligations from existing sources. So there is not too much incentive to look at solar rooftop as a source of renewable power. KREDL is also not particularly inclined towards rooftop solar.

Second, despite recent drop in prices, rooftop solar power is more expensive compared to grid power and incentives are needed to make it attractive. The tariff offered by Gujarat for rooftop solar is around Rs 11 per unit. BESCOM’s financials are not strong enough to support large incentivised Feed in Tariffs for rooftop solar power, without being subsidised by the state or centre. Without an attractive tariff, third party vendors would not be interested in undertaking such a venture, like they have done in Gujarat.

Other concerns related to technical aspects. BESCOM is reluctant to connect produced solar power to the low voltage (three phase 415 Volt or single phase 240 Volt) grid. They prefer producers connecting at the 11000 Volt level (in other words, on the high voltage side of a transformer). The Gujarat rooftop programme however allowed 240 /415Volt interconnection.

BESCOM is also concerned with dealing with a lot of individual prosumers and an approval process for each one. Hence they prefer the Gujarat approach of using aggregator firms who in turn deal with consumers. However, without an attractive Feed in Tariff, third parties would not be interested since they cannot make money. Industry representatives asked for tariff at levels comparable to Gujarat range for it to be attractive..

Currently, these issues are being debated. The DSM (Demand Side Management) team in BESCOM is coordinating the discussion. There are representatives from both citizen and industry groups involved. Hopefully, a consensus will be arrived at that allows more grid connected rooftop system in Bangalore.

BESCOM now plans to ensure 10 Mega Watts of solar-rooftop this year, with net-metering. Solar power can be fed into the grid at 415 Volts. But, there will a cap on the quantity of power that can be injected. It shall not be more than 10% of the network capacity at 415 Volts. BESCOM has formed a steering team that includes members of the public too. It has sent a draft cabinet note to government on solar-roof top policy.

Since BESCOM expects it would be hard to coordinate with individual consumers in addition to their existing responsibilities, it plans to call for tenders to invite a few agencies, who will work on behalf of BESCOM with individuals installing rooftop-solar systems to ensure proper regulatory compliance while connecting to the grid.

CAF flashback: What saved your neighbourhood from becoming a messy, commercial hub

As the Citizen’s Action Forum turns 10. we look back at their decade of activism that has changed Bengaluru in so many ways. In the first of the series, the tale of the PIL against BDA’s Master Plan 2015, which saw the curb on commercial activities on roads less than 40 feet wide.

BDA tells the court only certain areas will be allowed to be commercialised, but includes more areas while amending the master plan. This U-turn has left citizens of Bengaluru worried.