Of late, many suggestions have been floating around on ensuring security to women. One recent suggestion has been by electricity utility BESCOM’s Managing Director P Manivannan (IAS), known for his reformist efforts. In a discussion on Facebook last week, Manivannan said that having a 911-like helpline will be a major step in improving police responsiveness. If police tracks calls automatically and reaches a spot within 10 minutes of the call, it will deter criminals, he argued.

The current 100-helpline for Bengaluru is inefficient to the point that many do not consider it to be working at all. For a city of 85 lakh (8.5 million), there are only 15 lines for accepting calls, i.e., if none of these lines are free when you call in an emergency, the police cannot help you.

The 100-helpline alerts constables in Cheetahs and Hoysalas on getting distress calls. Pic: BTP

Bengaluru city police does not have an estimate of the current response time. "We have not calculated how much time it takes for people to get through to the helpline, or the time that police takes to reach the spot. There could be delays in reaching the spot because of traffic," says IPS officer Suneel Kumar, ACP (Law and Order).

Manivannan has opined that setting up a better helpline will take only two months since the technology for this already exists. Explaining his concept further to Citizen Matters, he says that the helpline should have GIS (Geographic Information System) to track the location of calls automatically; so that the caller can be traced even if she can’t speak on the phone.

"If the caller’s phone is GPS-enabled, as most smart phones are, the exact location within 10 meters accuracy will be available.The minute the spot is known, the nearest police vehicle shall rush there. For this, all police patrol vehicles will need a GPS," says Manivannan in an email. He says that there should be more patrol vehicles, and also more phone lines so that calls can be picked within three rings.

Manivannan gives BESCOM’s own example. He says BESCOM’s helpline – which consumers call for lodging complaints – has more phone lines compared to the police’s call centre for the 100 number, in Bengaluru. "We have 25 lines and we are increasing it to 45 by this month end, and by next year we will have 60 lines." He says that the police helpline can be set up as soon as purchases are made and staff are trained.

The concept sounds easily implementable, but reformist insiders in police opine that there is nothing easy about it. They say that the funds and staff for policing in the state is abysmally low, and that too many reforms are needed for a project like this.

S T Ramesh, former DG & IGP of the state, says, "You cannot bring first world systems in a third world country without comprehensive reforms. The police does not have enough staff, money or technology for a 911-like system." Ramesh is a two-time winner of the Police Medal from the President of India, and was awarded a Doctor of Literature for his ‘Reflections on Law enforcement’. He says that the state budget for policing in 2007 – ie., the budget for policing divided by total population – was 69 paise per person per day. Even now most Indian states do not spend more than one rupee per head daily for policing.

Ramesh also points out that the number of policemen in India is much lesser than that in developed countries. "India has 153 policemen per lakh of population while Portugal has 400. The police here has 90-100 duties a day, and at the end of the day they would still have 25% work left. The police are doing their best, but their best is still not good enough." In fact, the number of policemen for Bangalore is much lower even compared to other Indian metros.

On January 3rd, Karnataka Home Minister R Ashoka inaugurated the 24X7 helpline ‘1091′ for women. Though the helpline is based in Bangalore, women from all over the state can call the number. While Bangalore callers can get help immediately, callers from other districts are given counselling and contact numbers of their local police stations and NGOs.

The helpline will be managed by DCPs, and a nodal officer will check the overall performance. "There is a frequency on wireless only for contacting Hoysalas. On getting emergency calls, the helpline will alert Hoysalas in this frequency, and vehicles will be dispatched immediately," says ACP Suneel Kumar.

But within two days, media reports emerged quickly that women who tried the system complained of poor response. Citizen Matters tried calling ‘1091′ twice, both times the call went to the child helpline instead. Moral of the story: setting up and making announcements is easy. Making the back-end work is the hard part.

A top cop in the city says on condition of anonymity, that the city’s current fleet will have to be doubled at least, for police to function efficiently. He also notes that Delhi has 60,000 policemen for 1.6 crore population and Greater Mumbai has 50,000 policemen for 1.3 cr people. In Bangalore, a city of 85 lakhs, there are 17,000 policemen, notes the official. "Even of this 17,000, effectively there are only 9,000 for regular police work. Because 8,000 are in reserve and traffic police," he says.

Ramesh opines that having a good budget for policing, and spending it judiciously are key.

But anti-corruption top-cop ADGP Rajvir P Sharma takes a different line. Sharma says that even with low budgets, policing can be done by focusing on weaker sections. Sharma currently heads Bangalore Metropolitan Task Force (BMTF) and has proposed police reforms to the government before.

Currently, when you dial 100, calls from the Bengaluru area go to the centre located in the Police Commissioner’s office in Infantry Road. There is no single national-level system for ‘100′. Once the call is picked up, the helpline will alert the concerned local police station.

The officers in this station will decide how to handle the situation. They will ask constables in patrol vehicles to go to the spot first. ACP Suneel Kumar says that there are 110 hoysalas (jeeps) and around 350 cheetahs (two-wheelers) for the city currently. He says that in the case of minor crimes like quarrels, an ASI-rank officer from the station will go. "If there is a major crime like murder, Inspectors will go." 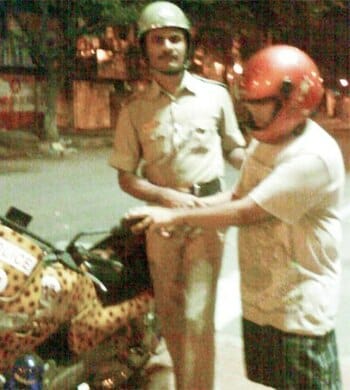 There are over 350 Cheetah two-wheelers that patrol the city. Pic: BTP

What has not gotten enough attention though, is the India’s quiet 911 pilot ongoing in Hyderbad. According to a report in the magazine India Today last September, GoI’s Home Affairs Ministry is planning to have a 911-like helpline for the entire country. The plan is to have a national 100-helpline which will be accessible from any phone anywhere in the country. There will be call centres in all big cities and district headquarters; and police, fire or ambulance services will be sent to the spot as required.

The system will have the GIS-tracking system for calls, and GPS-enabled patrol vehicles, similar to what Manivannan has proposed. The report says that the Bureau of Police Research and Development (BPRD) – which is in charge of the project – plans to implement it by 2014.

BPRD, located in New Delhi, confirmed to Citi
zen Matters that the project was going on, but refused to give further details over phone or email. Ironically, for a system designed to make policing more accessible, the officials in both BPRD and MHA (Ministry of Home Affairs) were too ‘bureaucratic’ to divulge details.

Back in Bengaluru, ACP Suneel Kumar was surprisingly not aware of the GoI project, and said that nothing associated with it has been going on in Bengaluru.

What about gender sensitive police?

Even if there is a well-functioning helpline, there is a major concern about how police responds to crimes against women.

"When a person joins as a constable, you cannot expect them to suddenly become sensitive to crimes against women," says Ramesh. He says that sending high level officers on getting a call could make a difference as they are likely to be more gender sensitive.

"But then again, more high level officers will be needed. Or you can train the constables to bring them up to the level of officers. There should be good trainers from outside the police also, and funds and buildings; there should be enough policemen to do the additional work of those being trained. This again comes back to resources," says Ramesh.

Ramesh says that Karnataka has been a pioneer in training; the GSPP (Gender Sensitisation and People- friendly Police Project) in association with UNICEF has been going on for a decade, and there have been improvements. But a lot more has to be done, he says, including even in aspects like housing for police.

"Only 40% of the police in the city are given accommodation. Many are staying in slums and in peripheral areas of the city, travelling long distances to work daily. How can you expect them to be gender sensitive while working in such conditions?"

Still, it is not just resources and better facilities for cops. According to Rajvir Sharma, what cripples the police mainly is lack of autonomy. "If police responds at the right time on getting a distress call and find that the accused is an influential person, what happens then? He will not be arrested."

Sharma says that high ranking officers have better salaries and can afford to take risks. "But for a constable, the salary is low and they won’t want to risk their neck disobeying an illegal order (from a higher up)." So if a constable or a low ranking police officer is asked to let go of an influential accused, he or she will likely obey.

For now, looks like it may be a while before Indians can be assured about a better phone-based police response system.⊕

Addendum
P Manivannan, MD of BESCOM, posted this in response to the article, in a Facebook conversation.

I do agree that, we cannot sustain an island of efficiency in an inefficient environment, as the top cop says. Thats why I am saying that lets outsource 2/3rd of the work. Receiving the emergency call, tracking, locating and informing the nearest police vehicle can be outsourced.

The police have to do just 2 things: 1. Increase the number of patrol vehicles by two or three fold. One jeep costs say Rs.5 lakhs. In Rs.15 crores you get 300 jeeps, who can reach anywhere in Bangalore in 10 minutes flat! A GPS system will cost another Rs.2-3 crores. The outsourcing work may cost say Rs.10-12 crores. So, in Rs.25 crores we make Bangalore visibly safer place.

Considering the last budget of the government was Rs.1,00,000 crores, Rs.25 crores doesn’t seem to be a big amount! If we want to extend it to whole of the state, it may cost another Rs.75 crores. So, in Rs.100 crores, we make all our 6.5 crore people safe! What more, we will have more free and fair elections too!

One was stabbed by an inebriated person and the other clubbed by a mentally deranged person. The victims and their families had to brush up on law to figure out the next steps.

If there is no ban, how to deal with the plastic?

There are no takers for low grade plastic, which is why the government has decided to ban it. There are ways to reuse the plastic waste, but they have not been found viable so far.

Biota booted, Citizens step in to save Agara lake