It’s an image stuck in my head from a long time ago. My friend, 19, is helping her mother roll out chapattis in the kitchen. Nothing wrong with that, except that her brother is comfortably slouched on the sofa, yelling for water. She yells back that he should get it himself and the mother adds lovingly but in all seriousness: Bhai ko paani de do, usko aadat nahi hai lene ki (Give a glass of water to your brother, he isn’t in the habit of fetching it himself).

The recent discussions in the light of the tragic gang rape case in Delhi reminded me of my friend’s brother and his misguided mom. I was reminded because among my friends, acquaintances and bloggers I regularly read, the point of discussion often was how to raise your son to grow up into someone who respects women. Someone who doesn’t think it’s his right to force his unwanted attention on a woman simply because he happens to be male. A type of male our country is sadly only too familiar with. 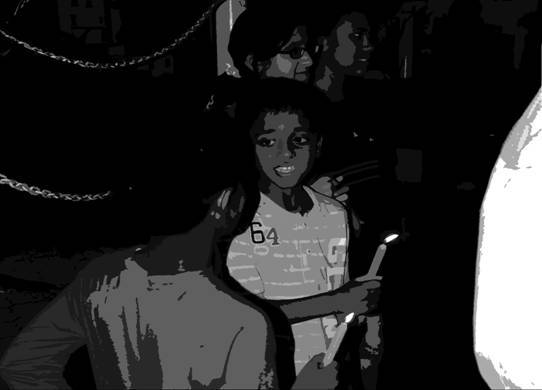 Like the boy who couldn’t fetch his own water, many boys in India are brought up to believe they are superior to girls. Superior enough to be brought water to; superior enough to get the first priority when family finances are being set aside for education – there are examples galore. This is often so deeply rooted that people are not even aware that there is discrimination between the boy and the girl. If it’s not said to them overtly, then it is expressed, intentionally or unintentionally through actions or words. Many grow up emulating fathers who think women come second to men, even if subconsciously. I know someone in whose family the women always eat after the men in the house have eaten. Subconsciously it’s something he expected his wife to do as well.

You can argue that these are small habits and practices that are probably miles away from the gory mindset that beats and rapes. But these also help in perpetuating a superior attitude that can sometimes go horribly wrong and lead to the worst of crimes against women – be it domestic violence or sexual crimes.

"Have the talk with your sons today," said a friend’s status update on Facebook at the height of the protests in Delhi and across India. Another lady took her 15 year old son to Jantar Mantar in Delhi for the peaceful protest. She felt being the age that her son was, he had to know and learn for himself what is right and wrong.

A writer friend in Bangalore whose son is 23 now, says she has never consciously taught him these things. "That’s because as a mother I never discriminated between my son and daughter." What she did was point out, remark and debate on unacceptable behavior when she saw one, even if it was the hero teasing the heroine on TV. "Families should not accept things the way they are. They should talk and debate about it."

Messages in the media can have a strong impact on children and very often movies and ads portray women in a condescending light. Banning television from your son’s life may not work but talking to him and asking him to think about what he says, might.

The onus, feels the writer, should be on the fathers to talk to their sons about respecting women. "The father can tell the son, look you have a sister at home, how will you feel if she was being teased? It’s learning for fathers more than the mothers."

Agrees the lady who took her son to the protests in Delhi. "If he sees equality at home, he will learn to respect equality. If he sees a dad who is dismissive of women or prone to passing comments on their looks or actions, that’s what he will learn and think of as acceptable behaviour."

Many people think women are going overboard with the protests, banning obscene lyrics and panicking about teaching kids the right stuff. Many older people would say that simply doing the right thing and saying the right things would make your children follow suit. But we are living in a very different world than it was even 30 years ago. Bad news outnumbers the good here and there are more chances of being ‘led astray’ to use an old fashioned term, than there ever were. So perhaps it’s time to talk to our boys. Now.⊕

Civic issues in Bengaluru: Easy to complain, but hard to resolve!

Many Bengalureans are familiar with BBMP’s Sahaaya complaint tool, but how do issues actually get resolved. How can software help BBMP function better?

The government found his report too hot to print

It took him two years to complete it. The report opens the lid on land grabbing in Bengaluru and the politics of it all. But the government, just navigating out of the Bellary crisis, is silent.

If you thought the new common zoning rules don’t concern you, think again. A road that is of 30 feet width can have all types of commercial activities, with no space for parking. And it’s going to be terrible in a city like Bengaluru.