She welcomes me into her home in Ulsoor wearing a beautiful hand woven Bailou saree. It is simple and elegant, much like Nagamani herself, exuding a quiet beauty and grace you hope to have when you reach her age. We get to know about ‘Mani aunty’ from Mala and Sonia Dhawan, the enterprising sisters who run A Hundred Hands, a nonprofit trust that aims to introduce and promote handmade crafts, art and food. Located in Bangalore, they hold an exhibition of creative art, crafts and concoctions every year.

The Dhawans tell me how Mani auntie’s herbal oil is a product much in demand, at their craft fair. Ruby red in colour and rich in density, the oil has a combination of herbs infused in it and is said to be extremely good for the hair and in some cases, even the skin. We asked Nagamani how she started making it. "My aunt passed it down to me. The formula comes from Kumbakonam in Tamil Nadu" This was in the early 60’s, when Nagamani was a busy mother to two bright young daughters and family was her priority. So instead of making it, she ended up using it and discovered how good it was. 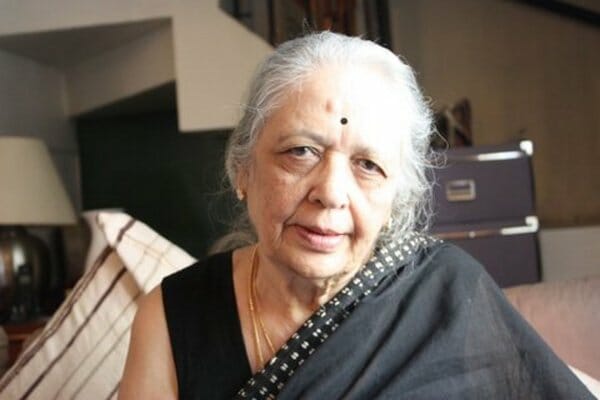 Therapy for personal tragedy
Her husband passed away in 1994 and that is when, encouraged by her daughter and supported by her domestic worker of 34 years, Vijaya, she decided to give the Herbal Oil venture a go under the name Roots and Shoots. Sadly one of daughters passed away a year and half back. Achala, her other daughter, says that the venture has been therapeutic for her mother and helped her to deal with her grief and shock. Encouragement also came in the early days from Mary, a salon owner who used the herbal oil and found it beneficial to her clients. "I would supply to her once in 6 months," Nagamani says. She was also introduced to A Hundred Hands, which helped her broaden her scope.

What makes ‘Mani aunty’ special, apart from being the lady behind a very good herbal creation is her voice. In fact, she has recorded two Kannada albums, one devotional and the other romantic, at the age of 70. Close your eyes and hear her sing. She sounds like a jubilant young girl singing a romantic duet. Despite learning music as a young student and having had stalwarts like C Aswath as her teacher, Nagamani stayed away from music for a large part of her life, being too busy being a wife and mother. She realized her dreams years later with the help of her daughters. What is amazing is that in 2003, she developed a tumour and recorded her Kannada album Thara Thara while undergoing treatment.

Today an active social life and her herbal oil venture, along with regular practice on her Tanpura keeps Nagamani occupied, despite the highs and lows that life has put her through. Given the great response to her oil, she plans to get it tested for an Ayurvedic license. It is amazing to see her fulfilling all her dreams after years of being dedicated to her family. Her message to other seniors: Get a chance to do what you like – it is the greatest gift.

Who does Agara lake belong to?

What does public property mean to different people in the city? Using the Agara Lake as a case study, Dr Rohan D’Souza, from the Ashoka Trust for Research in Ecology and the Environment (ATREE) explores these very notions of Urban Commons.

How to comply with COVID-19 lockdown: A Bengaluru apartment shows the way

An apartment community in Yelahanka New Town shows the way in how to adhere to the lockdown while also ensuring the well-being of residents and workers. The community also helped ensure social distancing in the neighbourhood, and supplied food to those in distress.