It was 10am in the morning. A torrent of unbearably loud music got me up on my feet out on the road. I saw many loudspeakers that had been installed overnight, from Nagasandra circle to Thyagarajanagar, all along the main road. 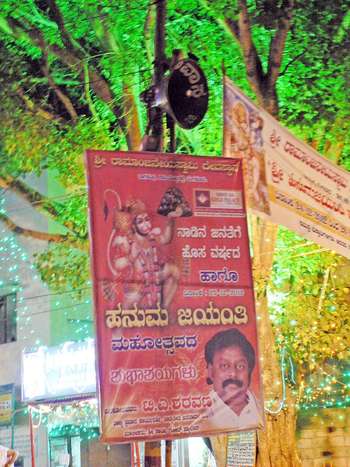 Sound should not be audible beyond 200 feet, says the law. Pic: Shamala Kittane.

Evidently, a nearby temple had decided to celebrate ‘Annamma Devi Festival’ – a borrowed tradition from a village but now out of context and place. A local JD (S) politician, Adisheshaiah, however decided to keep the tradition going.

The festive season in Bangalore begins in August and goes on for next two months, with Dasara, Diwali etc. Various gods are appeased with appropriate pujas alongside noisy celebrations. It’s Annamma Devi festival in this case that drove me to the nearest police station. Clearly the noise was beyond tolerable limits and in complete violation of noise pollution norms.

According to Karnataka State of Environment Report and Action Plan-2003.

The Noise Pollution (Regulation and Control) Rules, 2000, have set the standards for noise levels in various areas in our country.

The day time refers to the time period between 6 am and 10 pm. The period in between has been referred to as night. A silence zone is defined as an area comprising not less than 100 mts around hospitals, educational institutions and courts.

Clearly the Annamma Devi function was in violation of all the norms and I had a strong case on my side.

When I reached the police station, it was afternoon and the policemen were busy distributing packets of lunch. I tried to explain the problem to them. They were willing to take the complaint but they wanted my name and address. I was aware that complaints can also be taken anonymously told them that it was their duty to enforce law when it is being violated, irrespective of who is complaining. One of the policemen tried justifying the organisers, asking me, would I not be using loudspeakers when I have a function at my home.

I demanded to know whether the organisers of Annamma Devi had obtained permission, the policemen told me to go to the office of Deputy Commissioner of Police to get an answer.

So I went to the DCP’s office at Sound End circle, Jayanagar. I was shown the board showing visiting hours by a constable, indicating that I can meet the DCP, H S Revanna only between 4 pm and 6 pm. I told him I was not a visitor, and I was there to complain regarding the loudspeaker problem. He said the DCP was busy in a meeting and directed me to ACP of Bangalore South, M N Babu Rajendra Prasad. To my relief, the ACP heard me out patiently and ordered a few of his colleagues to look into the issue.

According to the Karnataka Police Act, 1963,
Licensing use of loudspeakers, etc.-
(1) Subject to the provisions of section 36 and of any orders made under section 31, no person shall use or operate,-

The ACP promised to have the speakers confiscated and issued orders to have them removed. When I returned home, the noise had subsided, but the speakers stayed. The event continued for the next two days. However the noise level remained under check, within tolerable limits.

However, on the third day, the noise was at its peak marking the end of the festival. It was an orchestra. I put up with the unbearable noise levels till 10pm, before calling 100. A Hoysala team arrived and put a stop to it after another agonising half an hour, while I was tensed and was praying to goddess Annamma Devi, that I wouldn’t have to call the police again.

Noise pollution cannot be ignored. According to World Health Organisation, noise pollution has the following effects on human beings:

Based on the duration of exposure, noise can have multiple effects on human beings. Some of which are listed below:

Public speaker systems that do not follow the norms of noise pollution are the main contributors to this hazard. Many of us just put up with it, as we think that in most cases it is temporary. However, short periods of
inconvenience are becoming a regular feature in the city. It’s time we become aware of the consequences of noise pollution. The picture below will give you an idea of measuring the sound you are surrounded by. 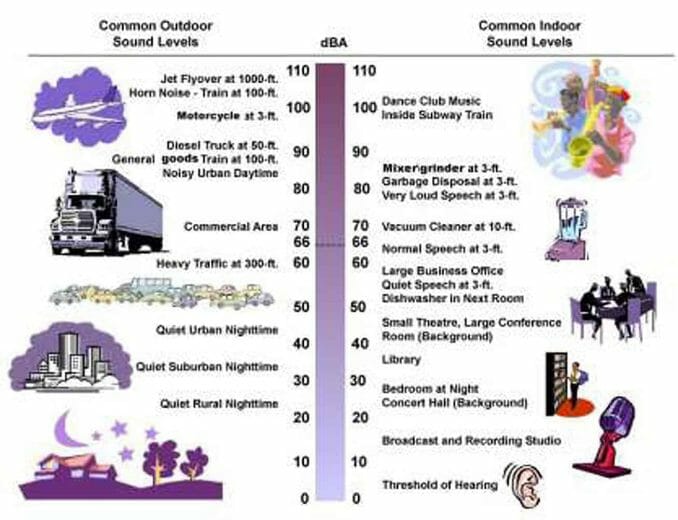 You can approach Karnataka State Pollution Control Board (KSPCB) for complaints against sources of noise that are permanent. KSPCB will issue a notice to the offending party and order a permanent solution.

According to Vijaya Karthikeyan, Environmental Officer at KSPCB, noise pollution by loudspeakers does not come under the jurisdiction of KSPCB. The Superintendent of Police is the ultimate authority in this regard, and has been empowered to enforce law and take action in cases of noise from loud speakers, crackers, processions etc. that require immediate action. Similarly, complaints against noise from motor vehicles go to the traffic police. Complaints on hotels and other private organisations go to BBMP.

After a few days, when everything got back to normal, I was left with the nagging urge to seek answers to the many unanswered questions, such as the number of permissions that can be granted by the police in an area, the criteria for granting a permission etc. This took me again to the ACP.

Bangalore South ACP Prasad took time to clear my doubts. “There is no limit on the number of permissions we are authorised to give, we mostly give the permissions. In some cases like in cases where hospitals are nearby, we (do) reject,” he clarified.

“We only give permission for mike sets, not for public address systems. If rules are violated, we file a case against them and confiscate the loudspeakers,” the ACP added.

When Thyagarajanagar is a thickly populated area with many schools nearby, isn’t permitting such functions in contempt of the law? The ACP responded, “The organisers seek permission from the corporation (BBMP) to erect structures on the road and from traffic police to block roads. In cases where they have been granted permission from these authorities, it becomes difficult for us to deny them permission. We have to co-operate.”

If you are one among the lakhs of voters of Dasarahalli, this is what you need to know! Incumbent MLA: S Muniraju     Interview: TBD     Performance evaluation from constituents: TBD     Related Data:http://opencity.in/information/karnataka-election-candidate-profile-s-muniraju List of candidates, 2018

Here’s a quick guide on what a gift deed is and what you do to ensure it is valid.

A watery grave for the fishes at Ulsoor lake

Tens of thousand of fish were found floating on the surface of Ulsoor lake on the morning on March 7th. Here’s what citizens and the authorities have to say about the incident.