Nearly 500-600 trucks with trash, operating in the dark of the night, dump their contents in Mandur every day. “After 10 pm, the trucks start pouring in and it goes on till early hours of the morning,” says Munianjaneyappa, 72, a resident of Mandur. Munianjaneyappa walked the entire 25 km of the padayatra from Mandur to Domlur, Bangalore, on Saturday, December 22nd, as part of the Lok Satta-organised ‘Dumping SAAKU’ campaign.

Around 50 people, including residents of Mandur, Lok Satta party supporters – many of them young professionals – and political and social activists took part in the walk. Former Infosys CFO Mohandas Pai met the group to show his support.

The number of trucks dumping at the Mandur landfill has increased in the last three months with villagers from Mavallipura, Gundlahalli (location of the Terra Firma-managed landfill near Doddaballapur), and those living near other landfill sites protesting against dumping of waste in their neighbourhood. 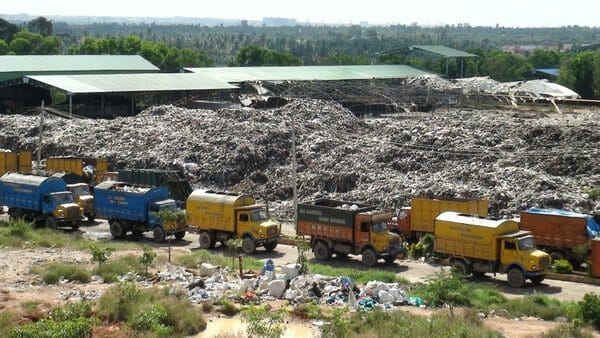 Mandur is located in the northeastern rural fringe of Bengaluru, along the Sivas Road that starts from Budhigere cross on NH4.

"The actual garbage generated in Bangalore is (closer to) about 3000 tonnes but the tender that the BBMP calls is for 6000 tonnes. It’s a clear case of long distance hauling, overbilling that BBMP and the truck contractors are profiting from. The longer the distance the waste gets dumped at, the greater the benefits," says Ashwin Mahesh of Loksatta party.

Ashwin Mahesh says BBMP keeps the landfills open inspite of the High court directing the city to manage its waste locally. Mahesh charged the BBMP of not adhering to scientific processes in landfill management. He explained the bill drafted by Lok Satta that can help empower local residents to have a say in such landfill contracts.

In the case of Mandur’s 153 acres of land (larger than the Mavallipura landfill), the landfill contract was signed in 2006 between Sri Srinivasa Gayatri Resource Recovery (landfill contractors), the village panchayat and BBMP. However villagers allege that the Panchayat members are hand in glove with the contractors to continue the dumping.

Gopal Rao, a resident of Mandur village who has been actively protesting against the landfill there, lamented about the contaminated water and health problems of the villagers. The farmers from the village who participated in the walk, warned that the fruits and vegetables in villages around Bangalore is contaminated by the waste leachate from the landfills. “Annadhathanige kasadhaana beda (Don’t feed garbage to the one who gives you rice),” said one of the placards.

The participants walking from Mandur towards Budigere cross, around 10:30 am. Pic: Anand Yadwad.

Gopal Rao says, “BBMP has been buying time from the villagers and making false promises of gradually reducing the quantity of waste and putting a complete stop to it by Feb 2013”. However he alleges the number of trucks coming in to dump are increasing.

The group of walkers ensured that none of them littered the roadsides as they made their way to the destination. The walk turned out to be a good awareness campaign and had messages from Mandur residents requesting Bangaloreans to segregate waste at source.

Manohar Elavarthi, a social activist and member of Praja Rajakiya Vedike, feels villages are always shortchanged. “Bangalore gets 24 hours electricity supply while the nearby villages have to make do with 4-8 hours of interrupted power. Bangalore gets more Cauvery water while farmers nearby face severe shortages costing them their crops,” he says.

"We are guilty of dumping our waste in somebody else’s backyard. We need to show solidarity and reassure the villages around our city, by responsibly managing our waste,” said Shantala Damle, Lok Satta candidate for Basavangudi. She exhorted citizens to segregate waste and clean up the mess, saying “it is also the first valid step towards cleaning up our politics.”⊕

How to control air pollution in Bengaluru? What measures have been taken and where is the city failing? An IAS officer, a mobility expert, an active citizen and a research fellow will discuss what it takes to make Bengaluru’s air quality better.

Will BBMP reservation list spark yet another court battle?

BJP councillors allege foul play in the reservation list prepared by the government, as many of them are set to lose the eligibility to contest in their current wards in the proposed reservation pattern.

Handbags from milk cartons, plants in coconut shells, and more at Second to None sale

Bengaluru generates thousands of tonnes of waste everyday, but we can reduce it substantially by using recycled or repurposed products. Here is an account of some interesting recycled products that were sold at an event organised by the volunteer group Second To None, last Saturday