A portable, comfortable work-surface for underprivileged kids. An alternate short distance public transport. These were among the entires that broke new ground at the National Student Challenge (NSC) 2012 organized by the Bangalore based Indian Institute for Human Settlements (IIHS) on 5th and 6th December. NSC is an all India annual challenge that aims to involve the youth of the nation in tackling issues related to India’s urbanisation.

Launched in July this year, NSC 2012 falls under the broader banner of Transform Urban India, an initiative that seeks to engage practitioners, policy makers, academicians and students working for urban development. The Rockefeller Foundation, along with Godrej Properties and Shri V. V and Smt. K V Mariwala Charity Trust supported the event as the Implementation Grant Partners and CIIE MentorEdge and TiE Bangalore were the Mentor Partners. 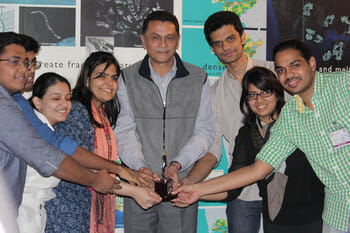 C B Bhave with the winners of National Student Challenge 2012. Pic courtesy: IIHS

Incidentally, the first challenge was held in 2011. As part of that, teams from all over the country submitted their ideas for solving several urban challenges. Out of 171 participating teams, 21 were shortlisted to present their proposals and be present at India Urban Conference 2011, held at the Mysore campus of Infosys Technologies India.

The 2012 finals
We received 107 proposals from 521 teams comprising 1244 students from 84 cities across 23 states. Out of them, 26 teams were shortlisted using a structured evaluation mechanism and invited to participate in the national finals, which were held at the IIHS Bangalore city campus. The 23 teams who finally qualified to present their ideas provided solutions to many real-world urban problems including infrastructure sustainability, waste management, transportation challenges, affordable housing and education. Subject matter experts and entrepreneurs guided these teams in fine-tuning their solutions over a month before the national finals.

Winning designs
The victorius teams at NSC 2012 devised a gamut of solutions for some major urban challenges. Team Mool-a-Roop’s idea focused on easing transport systems for short distance travel, i.e., from railway stations to various important destinations nearby. The concept was to create an alternate system of public transport in the city that will reduce pressure on the auto rickshaw.

Mool-a-Roop and Kumej, both from Balwant Sheth School of Architecture, NMIMS University, Mumbai, shared the first prize for the Team Challenge. Team Urbana from IIT, Kharagpur secured the runner-up position. The other three teams that participated in the finals included Team Fast Track from Indian Institute of Technology, Chennai, Team IRMA Innovation from Institute of Rural Management and Anand and Team Nautilus from Sri Venkateswara College of Engineering, Chennai. The last 3 finalists’ solutions focussed on housing, waste management and health respectively.

The three winning teams will receive a grant of Rs 3 lakhs each to help implement their solutions, along with technical support from IIHS. Additionally, cash prizes of Rs 60,000 each was awarded to Kumej and Mool-a-Roop while Urbana got a cash prize of Rs 20,000

Apart from the team challenge, IIHS also ran the academic conclave, an event designed to encourage young researchers to present their research work before a panel of experts. Six papers were shortlisted for the conclave, of which, three researchers presented their papers.

The paper titled “Negotiations and Contestations in Urban India: The “Case of Water Delivery to Slums in Mumbai” authored by Arpita Nanavati (University of Mumbai), Rithika Kumar (University of Mumbai) and Shachi Sanghvi (TISS) was adjudged as the Best Paper. It won a cash prize of Rs. 10,000. Chandrasekhar B. Bhave, Executive Chairperson, IIHS felicitated the winners of the challenge and the academic conclave.

About Shalini Pal 1 Article
The author has not yet added any personal or biographical info to her or his author profile.
About News Desk 1094 Articles
The News Desk at Citizen Matters puts out Press Releases, notifications and curated information useful to the urban reader.
Website Facebook Instagram Twitter YouTube LinkedIn

Reserve Gandhi Bazaar for pedestrians only

Gandhi Bazaar is noisy, chaotic, unsafe for shoppers. Here’s a way to make it more people-friendly.

Technologist? Entrepreneur? Sportsperson? All this and a lot more. Meet Manjula Sridhar.

Progress Dashboard for BBMP: A small idea with huge impact

A simple dashboard to monitor BBMP works, done with existing infrastructure, could be a game-changer in transparency in the administration of Bengaluru.