Last Friday, December 14th, there was an event announcement from BBMP. My apartment association got a printed letter (enclosed). The subject of the letter was "citizen participation in improving civic amenities", and it was signed by the Assistant Commissioner (Admin and Tax), with a request to the President of the RWA to attend a meeting. The note said:

Bangalore has earned fame as garden city and has attracted attention of the world. A meeting is organised in Town Hall on 15-12-2012 at 11:00 to discuss with the Commissioner of BBMP on how we can make Bangalore a city with the best civic amenities in the nation and the world. You are requested to attend this meeting.

The letter was copied to all Assistant and Deputy Commissioners of all the 8 zones to attend the meeting and to guide concerned EROs, as well as the all EROs. 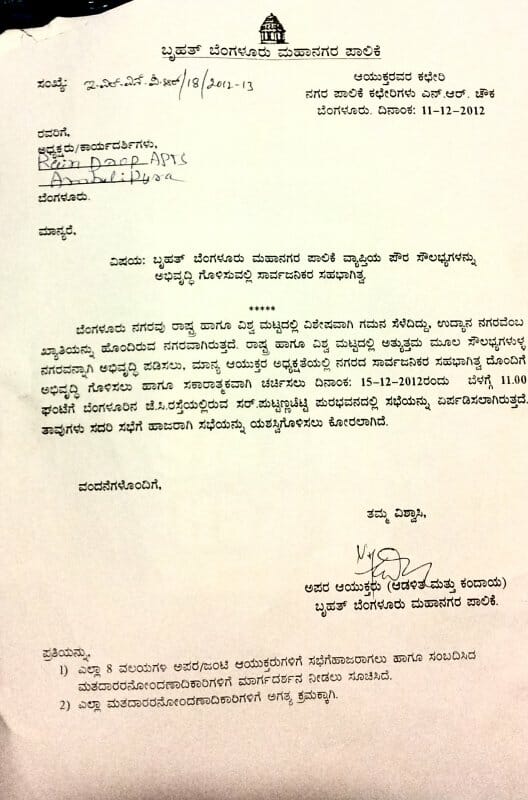 Meanwhile, another fellow ward resident, Nagesh (name changed) got a email from the Technical advisor to the BBMP Commissioner, that said:

A meeting is Convened with Resident Welfare Association office bearers to discuss urban Governance, Garbage Management, Civil Amenities , issue electoral on 15-12-2012 at 11.00 am in Town hall, J.C Road the officer bearers of the Welfare Associations are requested to attend the meeting.

The email asked recipients to contact the BBMP Head Office Control room 080-22221188 for any clarifications.

The resident was told by his BBMP contact, that the BBMP Commissioner himself will be chairing this meeting. The Addl Commissioner in charge of SWM will also attend, as will other SWM officers from BBMP.

Given that many of our federations RWA representatives got it, many assumed that new Solid Waste Management directives were to be shared and attended the meeting with some expectation.

Meanwhile, volunteers from Smart Vote and other activists working on voter rolls issues, were informed by Sangappa, Asst Commissioner, BBMP, that a meeting in Town Hall was arranged for RWAs to discuss voter registration process in the presence of CEO and his officers. Some members of this group to attended the meeting with hopes of resolving some issues.

So on the bright Saturday morning, a few hundred people gathered at Townhall. It turned out to be high hopes!

Anil Jha, the new Chief Election Officer, Karnataka updated the public on voter facilitation steps. He summarised the Voter ID enrollment (which was what was mentioned by the SEC in an information pamphlet released to the media a few days earlier and appeared in all newspapers. Jha said voter slips to be provided to RWA over the next few days and shared ERO contact numbers.

Dr Rajneesh Goel, BBMP commissioner chaired the remainder of the session. RWAs asked him about details of BBMP’s SWM plan. There was no concrete information on the operations of the new contractor (viz BVG who had got the contracts for the bulk of the wards).

Then there was a discussion on apartments being classified as :"bulk generators", it was mentioned "resident complexes are exempt" (but this is not communicated in any official communique).

Many other issues were raised by citizens including how BBMP will handle segregated waste, details of SWM contracts etc. BBMP only responded that they will get back on the same. They also mooted a plan to have these citizens’ meets every Saturday on request.

When one attendee complained to the Commissioner that private contractors are charging exorbitant amounts to clear garbage, Goel asked for the bill, but did not explain what he will do. Will they compensate the victim or file a case against the private contractor. At the least, will they ensure the official BBMP contractor picks up the waste as per law? It was not clear.

Much time was taken up irate citizens blasting BBMP about poor hygiene, rats, BBMP staff having to work without shoes, gloves and hats; or the menace of private contractors.

In all, there was no new information shared in the meeting or no problem was resolved. Indeed no official even took notes of the meeting.

A young man from the audience kindly pointed out that it would be meaningful only if the officials made notes and responded to their questions!

So why was the meeting organised? What was the agenda of the meeting? Voter lists? Civic amenities? Solid Waste Management?

When BBMP has not listened to citizens who have already analysed the problems abd proposed concrete solutions, what is the point in having a big open to all meeting that is neither moderated or planned properly. Why should citizens waste their time if no outcome is guaranteed.

P G Bhat, the citizen-litigant who led the expose on the state election commission’s deletion of over 10 lakh entries from the voter rolls, wryly explains the advantage of such meetings. "If the discussion becomes inconvenient on one subject, the authorities can change focus, remaining politically correct. The three subjects need hours of discussion each. Because the meeting starts at 11:00 a.m., soon the participants will be thirsty and hungry and the meeting could close open-ended, with no action points."

As a BBMP official admitted, "it is all eye-wash". It is only organised as an excuse to give the court, (where multiple PILs on electoral rolls and Solid Waste Management are getting heard), to show BBMP is talking to citizens.

P V Maiyya, a citizen commented, "In the administration (department) at my first (employer’s), I used to call it parallel processing. Never answer the issue at hand but raise others till the first fades away."⊕

Over 8500 trees in city outskirts proposed to be felled for road widening, BBMP trying to update its list of tax defaulters, slum eviction in east Bengaluru – read more on news from the city this week, in our roundup

If nothing else, this Mela is definitely worth visiting for great tasting, reasonably priced south Indian food.The Mela is on till January 17th.

The prestigious award comes to ESG for its efforts in bringing the water security issues to the fore front.