Earlier in December, the Karnataka High Court issued a judgment saying dogs deemed a menace or seen to cause nuisance can be exterminated by Bangalore authorities whether or not there is evidence of their having mauled or bitten children or adults. 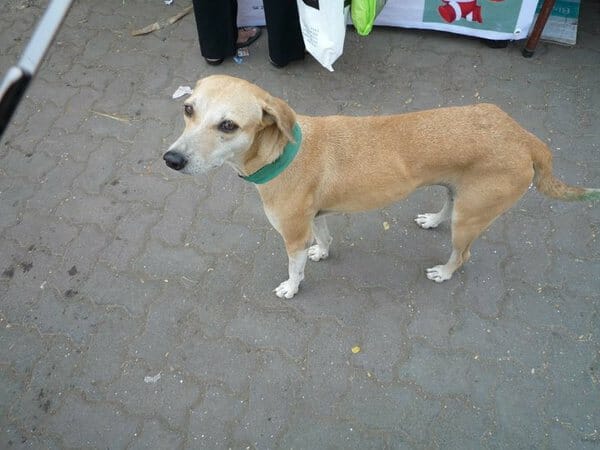 An independent dog with collar companion to indigent humans.

Chief Justice Vikramjit Sen and Justice B V Nagarathna failed to define the terms “menace” and “nuisance”. Bangalore-based voluntary organisation, Voice of Stray Dogs, has made a detailed assessment of the judgment.

The lives of the independent dogs in Karnataka’s capital would thus depend on arbitrary definitions that may be arrived at by the notoriously inefficient city authorities, who are indifferent to the real woes of Bangaloreans. They ignore hundreds of thousands of pot-holes and dug-up footpaths but want to go after defenceless dogs?

Disturbingly, the judgment precludes any role for Animal Welfare Officers in the matter of “culling”. Moreover, it is stupefying that the judgment covers sterilized and vaccinated dogs too.

In other words, even safe independent dogs may be killed off if some municipal factotum deems them a “menace” and a “nuisance”. This has implications far beyond Karnataka. In many parts of India, there are periodic calls from some sections of the public to “get rid of stray dogs”.

But our space also belongs to other non-human species of fauna, not to mention flora. Birds of various kinds, bees, geckoes, lizards, cats and, of course, dogs have been around since millennia and have coexisted peaceably, making no demands on human beings. In the name of development, cities such as Bangalore have gone about shedding trees and filling up lakes (never mind the lives of species of fauna dependent on these gifts of nature).

Species such as cows, pigs, goats, horses, donkeys, chickens, ducks and others have been enslaved, tortured and exploited by humans for millennia. Others such as dogs and cats have given great joy to hundreds of generations of humans. The affection shown to dogs is returned manifold. The gratitude and loyalty shown by dogs towards humans is unparalleled.

But in a country where casteism, sectarianism (communalism is the word used in India) and racism (as exhibited towards Northeast Indians and African students, for instance) and sexism (witness the female-to-male ratio which has fallen to just above 700-to-1,000 in some districts of India) are rife, could speciesism be far behind?

In India, speciesism – the assignment of different values, rights and consideration on the basis of membership of different species – takes the form of privileging the human vis-à-vis non-human and favouring cows over every other non-human species.

Indigent and homeless people, who are members of the lowest class and mostly of the lowest castes, tend to display a more humane attitude towards dogs. Many of them feed independent dogs, sharing what little they have with their canine companions.

The rich, who favour pedigrees – high caste dogs and equivalents of Aryaputras, so to speak – are unable to see the intelligence of indigenous independent dogs who also, incidentally, have greater immunity compared to “pure” breeds. People who express hatred for other humans in their support for a ban on the slaughter of cows are far less concerned about the demand for “culling” dogs.

Side effect of the garbage crisis

There is now more waste available for independent dogs, and the Bangalore authorities have so far failed miserably to address the garbage crisis.

All this is not to deny that there has been a problem with dog bites in Bangalore. But the number of “wards” under the Bangalore metropolitan authorities has expanded greatly and many of them are not covered by the Animal Birth Control programme. Moreover, people seem not to ask whether there may also be an immediate provocation for the dogs to attack: were stones hurled at them or were they taunted?

Getting rid of independent community dogs might actually hurt the people of certain areas who depend on them to warn of the entry of strangers at night. At a time when attacks on the elderly and single women are increasing, should the city authorities be going after independent dogs?

In the above paragraphs the term independent canines or dogs has been used in preference to “stray dogs”. Dogs do not stray. Humans do: so many stray from the path of ethics and legality. Humans kill each other mindlessly and have periodically carried out genocides and pogroms merely because of slight differences in beliefs or skin colour, tribal lineage, language or regional origin.

If dogs sometimes attack humans or other dogs, they do so in line with what is dictated through their DNA – either in self-defence fearing an attack, to defend their “territory” or establish a place in a pecking order.

There is one curious practice among Indian dogs that might raise questions as to whether they discriminate against collectors of recyclable materials, often referred to as “ragpickers”. These men and women tend to look unkempt. Have independent dogs imbibed human attitudes towards recyclers? Or could it be that the recyclers’ sacks are a smorgasbord of scents and smells and the dogs – endowed with the keenest of noses – are displaying not hostility but excitement at the approach of this medly of aromas?

That the Chief Justice of a High Court has gone so far as to approve of pogroms against this marvellous fellow species is deeply saddening and disturbing. Has the judge taken a walk along Bangalore’s roads and made eye contact with independent dogs that loll about peacefully, minding their own business? If he does so, he might see the spark in their eyes, a questioning look with occasionally an endearing tilt of the head, pricking-up of the ears, wagging of the tail and a body language conveying curiosity and an eagerness to communicate, to receive and return affection.

But instead, he has chosen to align with those destroying the soul of the city, those who have already removed a lot of its trees and lakes, added millions of cars and thousands of tonnes of rubbish and dust, choking humans and non-humans alike.

As the judgment goes against Article 51 A, clause (g), of the Indian constitution, which enjoins citizens “to protect and improve the natural environment including forests, lakes, rivers and wild life, and to have compassion for living creatures”, the Supreme Court is most likely to set it aside as it has done previous misguided moves by authorities in other cities. (Animal rights activists ought to rope in the support of biscuit manufacturers – makers of Parle-G, Sunfeast and others – whose products are offered by millions of people on the streets of Bangalore and other cities to independent dogs. Should a “culling” take place, biscuit-makers will suffer a dent in revenues!)

Changing the pernicious mindset behind the BBMP’s move as endorsed by the Karnataka High Court will need much greater effort and longer campaigning.⊕

On February 6th, Supreme Court stayed Karnataka High Court order directing the BBMP to cull strays that are a ‘menace’ or ’cause nuisance’. Source: strays.in

CUPA’s petition was admitted in Supreme Court (SC) on 6th Feb 2013, and a stay granted against #5 of the operational order of the Karnataka High Court judgement. CUPA had filed its Special Leave Petition in the SC against the final judgement and order dated 07-12-2012 passed by the Honorable High Court in WP No. 37197 of 2012 in the matter of Jishnu G Vs BBMP and others.

In granting the stay, the Judge mentioned that it was a very good order, unlike the Mumbai High Court order, but was convinced by arguments of AWBI and CUPA’s counsels regarding point #5 specifically. CUPA had been under tremendous pressure, for the last 2 months, ever since the High Court order was announced, with public comments on many electronic fora condemning the order and predicting dire consequences for all stray dogs in the state. The Honorable Judge’s comments vindicate CUPA’s stand that the HC order was mostly good, since it upheld the ABC programme. CUPA, along with the Animal Lovers’ Association were the only two organizations who finally took the matter to SC on the point regarding “nuisance” dogs.

About N Jayaram 2 Articles
The author has not yet added any personal or biographical info to her or his author profile.

Jalamitra shows how to rejuvenate a lake in Bengaluru

Jal Mitra celebrated its second year anniversary recently. A volunteer from this group actively involved in the preservation of Rachenahalli Lake, shares its road map on how you can save your local lakes.

Street Vendors Federation urges for implementation of Street Vendors Law, to safeguard the interests of street vendors and urban poor.

Do Cubbon Park and Lalbagh need Wi-Fi? Visitors say no!

A survey of visitors to Cubbon Park on whether they wanted Wi-Fi found that they’d rather not… Some of them even wanted cell phone jammers instead!