You live in the third largest city in India by population. The city’s GDP exceeds 10 billion dollars (Rs 54,000 crores). The largest chunk of Karnataka’s GDP and tax collections come from Bengaluru alone. The city has the third largest number of crorepathis in India and by some accounts, the highest median income level in the country.

It isn’t just that. An emerging civic and green movement led by old and young alike is fighting back to take back lost public spaces – lakes and trees for instance – with a resolute willingness to checkmate corrupt administrators in the High Court. Cultural vibrancy is only growing. If we live in a rainbow nation, this must be rainbow city. The city’s tradition of contributing to the country’s sport achievements is expanding. 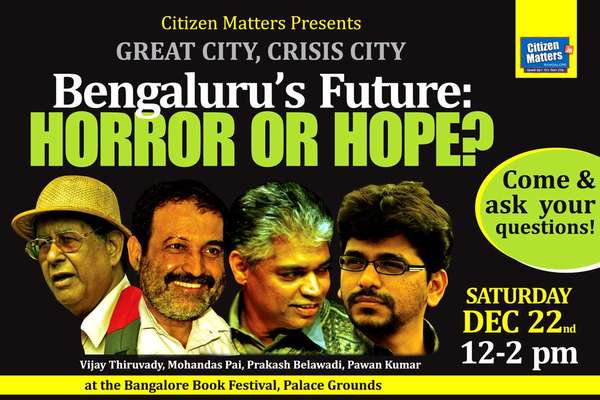 But let’s face it. For the broad majority, our city seems to only matter for money and jobs. With massive wealth creation has come woe. Pollution levels at traffic intersections are amongst the worst, worldwide. Even if an ant takes a turn at an intersection, Bengaluru’s thick traffic jams up, frustrating already stressed citizenry. Water has run out. We dump thousands of tonnes of our garbage in open sites at villages nearby, contaminating their water, air and livelihoods. Sweepers’ wages are being robbed by petty contractors symbolic of a scam regime that runs through all of the city’s departments.

So when Mohandas Pai, educational philanthropist and one of the city’s most famous chartered accountants recently called this a ‘great city’, my reactions were mixed. Make no mistake, he wants serious change too, and yet, he defended his statement on the city’s greatness.

This Saturday, at the Book Festival in Palace Grounds, we’re going to ask Pai this question again in your presence. It is year end, and time for some reflection.

And it is not just Mohandas Pai. Three other illustrious Bangaloreans – Vijay Thiruvady, Prakash Belawadi and Pawan Kumar will be there to equally give their take. There will be no long speeches. Just 3 minutes of opening remarks and then questions and answers.

We’d like you and your friends to come and ask your own questions.

For a change, this will not a session with government officials. We do not want promises that will never be kept. We do not want ceaseless and shameless use of the present continuous tense of the English language "We are looking into it, we will be appointing a committee, we are completing the project..". We do not want a grievance-redressal session that eventually peters into a shouting match.

This meeting is a level above that. We’d like to take a step back and see where Bangalore has come from and where we are going. Is it more horror from reckless growth in store or more hope. What is really likely to bring lasting change?

If there was something, you want to ask theatre person-journalist-filmmaker Prakash Belawadi (who ran for city council in 2010), this is where you get to ask him. Or shoot away at the youthful engineer-turned filmmaker Pawan Kumar, director of Life-u Ishtene about how he is taking on Kannada filmdom (a major sign of change) right here in Bengaluru with crowd-sourced funding.

And likewise, ask Vijay Thiruvady to tell what Lord Cornwallis saw when he first rode into Bengaluru in 1791, along Hosur Road, or about the rarest thing in Lalbagh. Thiruvady has documented the heritage trees of Benglauru in a special book that released last year, dotted with these little delights.

City architects, lawyers, historians, teachers, activists, journalists, and above all – citizens – hope to see many of you there on Dec 22nd, 12 noon. Come with your questions on the future of the city. If you’re settled here or intend to live here a long time, this session should interest you.

And oh, you can also pick up your copy of our book "Living in Bengaluru" at our stall at 10% discount!⊕

Bengaluru gets a taste of Japan

Kimonos come in varieties. Origami has been adopted quite happily by Indians. Sushi is just one of the food items from Japan. A few glimpses from 2012’s Japan Habba.

A play about suicidal tendencies in individuals seeks to raise funds for SAHAI – a Bangalore helpline for people in similar distress. Read on and chip in.

Legend of the Guardians is a visual experience

3D entertainment awaits for the whole family this Diwali. Meet the owl who traverses the universe to save the kingdom of owls.