The year ends with a big bang for Hindi cinema. Just about two weeks after Jab Tak Hai Jaan and Son of Sardar played to ‘Housefull’ cinema halls, Talaash released to audiences. A week later Khiladi 787 wooed the crowds, and by December 21st it will be time for Dabangg 2. 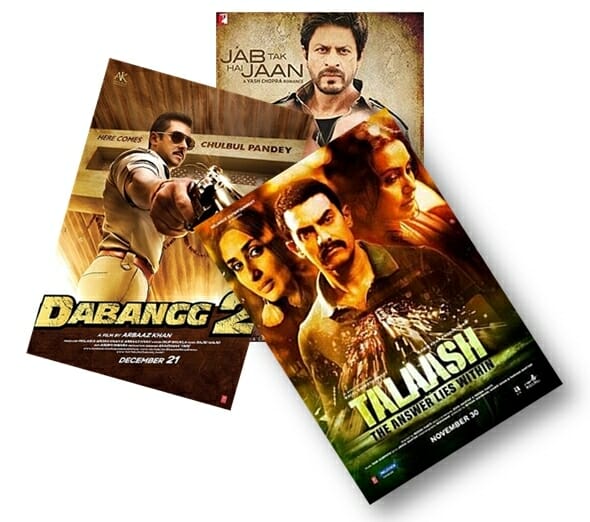 So while it has been a spectacular closing at the box office, what does it mean for Hindi cinema? Clearly, it’s the first week’s performance that determines the commercial success of a film. But while Talaash may finally emerge as the least successful of the year’s final releases, it is an interesting film on many counts.

From the start, the producers had pegged Talaash as a ‘suspense film’ and not a ‘thriller’, and rightly so. Peppered with influences of film noir, the film has shades of many Hollywood classics from David Lynch’s Mulholland Drive to Alfred Hitchcock’s Vertigo and Manoj Night Shyamalan’s Sixth Sense. Yet in the best cinematic tradition, these are always tributes to the original classics and never blind rip offs.

In the final analysis, the film is a tribute to the craft of script writer/director Reema Kagti – and incidentally, this talented director is absent from most of her film promos.

In keeping with the nuances of the suspense film, the plot is strung together by the gradual revelation of information. It is the audience who must piece this jigsaw puzzle together. But the real triumph of the director is that when the film races towards its stunning conclusion, and the audience realizes that Reema Kagti has left no loose ends to her plot. Everything adds up.

Also underlining the director’s skill is her ability to balance all her actors – no one character overshadows the other. We see Aamir Khan in a police uniform again – for the first time since Sarfarosh – and he plays his part with conviction. But as in Dhobhi Ghat before this, and for the second time in the last decade, Aamir is just another actor who blends seamlessly into the film’s greater fabric.

Almost 14 years after the release of Ghulam, Aamir and Rani return as the lead pair in Talaash. But now the naughty flirtation of Aati kya Khandala is replaced by a mature love story, as the two actors continue to play off each other to create superb onscreen chemistry.

It’s also another great performance from Kareena Kapoor, who embodies the persona of the femme fatale in her avatar of a Mumbai hooker.

On the production front, it is also the coming together of Aamir Khan, Ritesh Sidhwani and Farhan Akhtar – over a decade after the making of the cult classic Dil Chahta Hai.

In more ways than one, Talaash is a true example of a Bollywood suspense film – with romance, music, melodramatic emotion, crime, retribution and even an encounter with the supernatural. But the script writer/director’s hand makes the incredible become credible. And so, Hindi cinema’s story telling comes age. I would go for a rating of 4 stars for this film.

So now it’s time for Dabangg 2 to open in theatres. Let’s see how it impacts the fortunes of Hindi cinema’s end-of-the-year blockbusters. More importantly, will it repeat the magic of Dabangg? Meanwhile, all you film afficionados, block your calendars, the Bangalore International Film Festival returns between December 20th to December 27th.

Watch this space for more.

Nine lives and one year later

They could have mourned the losses of their near and dear ones and walked away. Instead, within a year of the Carlton Towers fire, they created Bengaluru’s annual fireman awards.