Pandit Ravi Shankar’s farewell to Bangalore a while ago brought back old memories of the great musician’s concerts I attended in Bangalore and elsewhere. The first time was a late evening concert in the Town Hall in the late ’50s. I was supposed to escort my sister and her friends back home after the concert. I reached a half hour before the concert was supposed to end. The side doors were kept open.

I was in college. I had put on a Gandhi cap (we used to wear it for the PT classses) and that too with a hole in the middle. As I stood in the doorway, my intention was not to listen to the maestro but to locate my sister. It was not easy since the hall was dark and I kept going from one well-lit door to another. My strange appearance did manage to turn quite a few heads away from the music. Needless to say that I was later scolded by my sister. 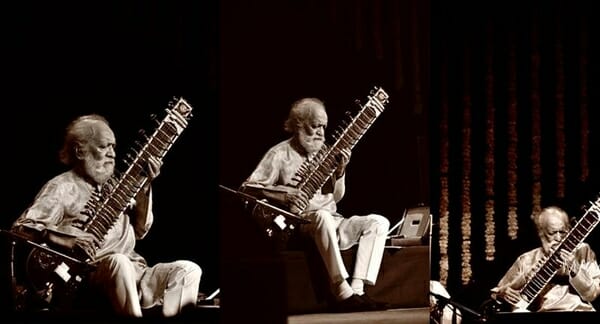 Photographer Mayur Channagere had a rare opportunity to capture Pt. Ravishankar performing live at one of his last concerts, “Farewell Concert to Bangalore” last year. He says,”Pandit Ravi Shankar (1920-2012), you will truly be missed. But you will forever be with us through your music.”. Pic courtesy: Mayur Channagere Photography.

With time I did learn to appreciate (if not understand) music in general, and Ravi Shankar in particular. He became famous world wide, partly for his association with the Beatles and also for concerts with Yehudi Menuhin. I remember a beautiful piece in Hamsadhwani from the album he released with Menuhin (East meets West). And there was also the piece from Pather Panchali (Satyajit Ray’s film that he composed the music for). I attended one of his concerts in Rang Bhavan, Mumbai too.

When I moved to the US for graduate studies, I found out that Pandit Ravi Shankar was quite popular there too. He played in Woodstock in 1969. And then he came to University of Michigan, Ann Arbor (where I was studying) and performed at the Hill auditorium.

Those were the late ’60s when America had changed in many ways and one of them was to look at other cultures and alternate life styles. Thus the auditorium was packed with American students (There were not that many Indian students on the campus to fill a big auditorium and even otherwise Ravi Shankar was considered too ‘classical’ by many Indian students). I really enjoyed the performance. He said he liked American campuses but rebuked the audience for the smell of marijuana (ganja) in the auditorium.

A little later, on a fateful day in May 1970, I got a cable from India that my father (P R Ramaiya, founder of Tainadu newspaper) had passed away. I tried to call home, but those were the days when calling home from US was a very long process and which quite often did not yield results.

There were friends but I felt lonely. I bought a few Ravi Shankar and Ali Akbar records and listened to them for the next 36 hours. That was how All India Radio consoled the nation at the death of great people those days. And that was the only way I knew to console myself ! Thanks, Panditji!

Waiting in line to perform my mother’s last rites at Sumanahalli Crematorium, the familiar smell in the air took me towards the valley. The Vrishabhavathi river flowed dark and foul next to the crematorium.

If I drop everything and rush there, will he come back to life?

She actually lived Bhagavadgeeta-style, with an uncompromising attitude towards work. While trying to trace the story of a domestic helper, the author also chronicles the memoirs of the lost Bengaluru.

None of us would go about building our own homes without a well thought out plan. Why should we be willing to accept such an approach for our own home, the great city of Bengaluru?