The camaraderie is more than apparent as members of Non Resident Indians Parents Association (NRIPA) in Bangalore meet at fellow member BA Ramesh’s home in Jayanagar. Notes are exchanged, jokes are cracked and an endless variety of snacks keep doing the rounds. There’s a level of comfort obvious here that comes only from long association and sharing a common ground. As you talk to them, you realize that NRIPA members are almost like an extended family to each other.

Started by Ambuja Narayan 13 years ago to find something in common with other parents whose children too have moved overseas, the group has 300 members in Bangalore. Narayan launched it through an advertisement in the Times of India after seeing the facilities available for seniors abroad. The response was encouraging. "My phone wouldn’t stop ringing," she says. Since then NRIPA has mainly grown by word of mouth. The group has a nominal membership fee of Rs 750 per couple and Rs 500 for single membership, with the only criterion for joining being that their children must live overseas. Every two years, NRIPA selects a new managing committee to oversee its affairs. 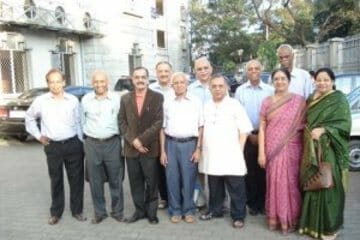 "It’s a mutual support group," says current president MS Vijayendra Rao, adding that they meet once every month and organize a picnic or outing every three months. "We have some eminent members and arrange talks by them as well." Narayan adds that they don’t expect any funding from outside, whether it is from their children or from elsewhere. The members try to help each other out during illnesses or for any other need. Recently, when the US-based daughter of a member went through some trouble, it was the family of another member that reached out to assist her after word spread through the group.

"We are a very social group," says Rao, adding that recently a few members even met up in Manhattan, when some of them were visiting their children in US. "We don’t have the empty nest syndrome," says Narayan, adding that their kids are very happy about the group as it provides companionship to their parents who are often living alone in India. "They are amazed at our energy," she laughs.

NRIPS indulges in several initiatives, like contributing towards disaster relief funds, donating to senior citizens’ homes and working for underprivileged children. They also organize activities with the help of their own members, many of whom are still quite active in their business (one member runs a travel company, another is a chartered accountant) or keep themselves busy with social work, travel or hobbies like photography. "We support each other," says Rao, adding that they like to keep in touch and meet often, especially during festivals. The group also travels a lot and have gone to several places in India and overseas.

The idea, as they chorus, goes beyond just companionship. NRIPA Bangalore is a close knit group of parents who offer each other mutual help, try out different ways to alleviate loneliness and keep the brain active. In other words, stay happy even if the kids are miles away. Incidentally, there are groups like NRIPA Bangalore in Pune and Vadodara too.

Karnataka’s Archeology Department, the oldest in India, struggles to manage 844 monuments, 14 museums and more with a meagre 25 crores and a staff of 97. Plus 25000 other monuments are not notified due to the lack of funding! Yet one project to erect a statue and beautify a tomb gets 111 crores.

Though many lakes in Bangalore are dying a slow death, nothing much has been done concretely to stop the mindless encroachment. Kadugodi lake is the latest on the list.

Can Bengaluru learn from Mexico city?; How Ola, Uber changed your commute; Cost of a well

News and views from the city for the second week of July 2016.