Saroja, a domestic worker staying in Ambedkar slum in Ejipura, spends much of her time waiting near a public tap every day. There is no individual water connection to her house, and the only sources are two public taps nearby. The tap gives water for 2.5 hours everyday, but this could be at any time during the day.

Saroja checks up on the tap every now and then to collect this water, even though she knows that it is mixed with sewage. Both she and her 24-year-old daughter Mangala, are responsible for collecting water for the household.

This story is the same for most slums across the city. Many slums do not get water even as apartments and layouts nearby them do. Bengaluru now gets 1400 million litres of Cauvery water daily, but hardly any of this reaches the poor. 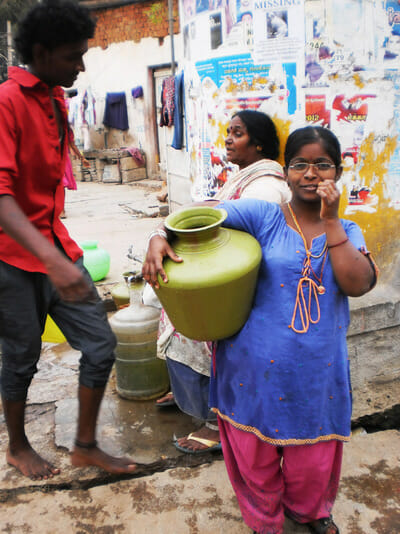 In many city slums water comes to individual houses once in one or two weeks. An example for this is Gopalpura, where residents were lathicharged by the police when they protested recently, demanding water.

Then there are a few slums that have absolutely no supply network. For instance, 17 slums along JC Road in central area have zero network. In many slums, residents rely heavily on public taps, community wells, private tankers etc., either waiting for hours for the water to come, or spending hefty amounts to buy it.

A 2010 survey by NGIL (Next Generation Infrastructure Lab), which is part of the NGO CSTEP (Centre for Study of Science Technology and Policy), gives a clearer picture. They surveyed 35 slums in different parts of the city, covering 1000 households overall. Ten percent of households in each slum was interviewed.

The survey found that in 27 out of the 35 slums, none of the interviewees had any individual connection. Public taps were the most common source of water. For six slums – each in different parts of the city – public taps was the only source. Similarly, two slums in east outskirts relied completely on private vendors. Only seven of the 35 slums reported getting water from tankers. 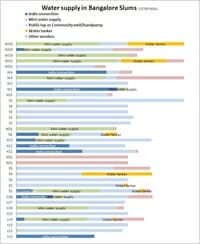 Percentage of respondents using each source is marked in different colours. WOn (WO1, WO2 etc) are slums in west outskirts of city, Wn are in west, SOn in south outskirts, Sn in south, NOn in North Outskirts, Nn in north, KCn in Koramangala, EOn in east outskirts, En in east, CCn in city centre.(In most slums, residents use more than one source, hence the total percentage may add up to more than 100. In a few slums, all interviewees did not respond, hence the percentages do not add up to 100.)

Contamination of water is another issue in slums. Rajendra Prabhakar of the NGO PUCL-K (People’s Union for Civil Liberties – Karnataka), says, “Since most slums are located near major drains, their water will be polluted. Most slums use borewell water (which is pumped into public taps, hand pumps etc). No tests are being done to test the water quality.”

In Gopalpura slum, water is smelly, almost brown in colour. But most people do not boil the water before drinking it. Veena S, a resident here, says that she simply ties a cloth around the water tap so that some dirt is caught by the cloth. “Infections and fever are very common here. We just go to a clinic nearby, and get an injection for Rs 20-30. If we store the water for 3-4 days, it looks oily,” she says. Veena says that the water quality has improved a little after their recent protests.

Even by BWSSB’s estimates, the slum water situation is poor. A senior BWSSB officer talks about the 96 core area slums that are going to get water network as part of the Cauvery Stage IV Phase II project. The officer says, on condition of anonymity, that only one-fourth of these 96 slums get good water supply currently; even though half the slums do have a good individual supply network. “Another 40% slums have irregular supply – only some pockets get water, and supply comes once in 5-8 days. In the remaining 10%, there is no network at all.”

Work on these 96 slums is expected to start soon; four NGOs have already submitted survey reports and plans for creating the water network. The NGOs are ICDSS (India Community Development Service Society), MSSS (Mythri Sarva Seva Samithi), NESA (New Entity for Social Action) and Mahatma Gandhi Trust. Under the project, BWSSB actually has to cover 362 core area slums, but work on the other slums has been delayed. Though the entire project was supposed to be completed by September 2013, BWSSB aims to complete it by 2016. BWSSB has to repay its project loan to the funding agency JICA (Japan International Cooperation Agency) by 2016.

Much of the supply network in slums was created since 2000; before this, there was hardly any network in slums. But many residents could not pay bills regularly, and BWSSB then diverted the water to new layouts.

While BWSSB blames slum residents for not paying their dues, residents say that they would not get water even if they pay. Syed Zikria, 68, of Gopalpura slum, says, “Even if water does not come, I am charged the minimum bill amount. If some people do not pay, water does not come to the entire lane.”

Many other residents are unable to pay since their bill has escalated to thousands of rupees, because of pending bills and the interest on them. The BWSSB officer (quoted earlier) says that this is a chicken-and-egg situation. “Initially when they get connections, residents are willing to pay. But many local BWSSB offices do not give the first bill on the first month, and only give cumulated bills for many months that come to Rs 500 or so. Residents cannot pay this; so they pay small amounts and the arrears grow; gradually many stop paying. Because of this, and due to increasing demand from new layouts, BWSSB diverts the water, and then slum residents stop paying altogether.”

It took two years for the government to waive interest on bill. By that time, residents still had the newly accumulated interest to pay. It came up to almost as much as the waived amount.

The officer says that the four NGOs in the Cauvery project have requested BWSSB to waive off the interest on bills, so that residents would have to pay the principal amount only. BWSSB will have to send the waiver request to the cabinet; so far, it has not yet decided on whether to do this or not. In 2008, BWSSB had made one such request for one-time waiver to the cabinet. Specific interest amounts were mentioned against each household, and sent to cabinet.

The request remained pending for about two years; it was only in 2010 that Cabinet finally gave its nod. In these two years, the interest on the earlier bills kept on piling up. “Finally when the waiver came, residents still had the newly accumulated interest to pay. It came up to almost as much as the waived amount. The calculations of BWSSB engineers were also wrong in many cases,” says the officer. Most people did not benefit from the waiver, though on paper it seems as if they did.

Jayanagar MLA B N Vijayakumar says that the government waiving off about Rs 4 cr should have solved the issue. “I will check with BWSSB about whether interests are still pending. Waiving off interests will help slum residents pay bills regularly in future.” Vijayakumar gets regular requests from slums in his constituency, to supply water or make repairs.

There also a relief that BWSSB Chairman has declared for slums. He has said that bills can be waived for the specific days on which a household did not get water. BWSSB does not have data on this, but the four NGOs have been asked to facilitate the waiver. They have to bring specific cases to the Water Adalats (BWSSB’s grievance redressal meetings).

Illegal connection is another problem. The JICA project aims to tackle this issue too – the plan is to legalise connections and to fix meters in all households free of cost, and to get residents to pay monthly bills from then on.

Slums can pay for their own water: BWSSB

In the past, there has been conflict between the ideas of BWSSB and that of NGOs/activists, on whether slums should be given water free of cost. Ever since it created the slum networks since 2000, BWSSB has maintained that slums have to pay.

Under the JICA project, the four NGOs (mentioned earlier) have to survey all 362 slums. The survey of 250 slums have been completed, and the conclusion broadly is that slums can pay for the water they use. The survey indicated that many households had multiple earning members, decent socioeconomic conditions, and own gadgets like TV and fridge.

Citizen Matters has a summary of the survey done by one of the four NGOs, ICDSS (India Community Development Service Society). ICDSS was in-charge of surveying 53 slums in the west and southeast divisions.

The survey result do not paint a very rosy picture. Only about 37% of households had a hakku patra for their property. Most residents work as coolies, private factory workers or are self-employed. Over half the houses have area upto 150 sq ft only; only almost as many houses are pukka.

The survey also showed that nearly half the households earn Rs 2500-5000 per month, but that this segment also owns TV, phone, two wheelers etc. The minimum water bill, for consuming upto 8000 litres, is Rs 48. The survey concludes that they would be capable of paying the monthly water bills. It also found that, of those who did not have individual connections, about two-thirds were interested in getting new connections. However, there were also one-fifth of households that earned less than Rs 2500 per month.

Kathyayini Chamaraj of the NGO CIVIC, says that slum residents are willing to pay for water, only because they already spend much higher for alternate sources. “Slum residents pay Rs 5 for every 15-20 litre pot of potable tanker water. This is more than what well-off people pay. So they think that they might as well pay the minimum water charge. A minimum lifeline water supply should be provided free-of-cost to all slum residents and meters fixed,” she says.

Kathyayini says that fixing meters ensures right to water and enables residents to question BWSSB. She says that those who use more than the minimum supply can be charged.

CIVIC has already put forth this suggestion to BWSSB in a recent public conference, and the Board has agreed to look into this. But currently the Board’s position is that residents have to pay the bills. “As of now, we are spending about 70% of our income to pay BESCOM to pump water. We don’t get any funds from the government, and hence we need income from users. Also, paying for water ensures judicial usage,” says the BWSSB official. Vijayakumar says that residents are willing to pay Rs 100-200 per month for water.

While these discussions are going on, residents are not convinced that things will change soon. Veena of Gopalpura slum is also a member of the activist group Jana Seva Samithi. She says that they plan to give a report on the water situation to all politicians contesting in the 2013 elections. “We have given up on our current MLA – there has only been promises, nothing has been done. It is the same with all politicians. The problem is also with residents – once the issue becomes less severe, they stop talking about it. They vote for those who give them money.” Even then, Veena says that she will look forward to what happens after the 2013 elections.⊕

About Navya P K 255 Articles
Navya P K is a journalist at Citizen Matters, and a freelance journalist based in Kerala.