This has led to a drastic drop in the printing of tickets by the machines to one or maximum two tickets a week. 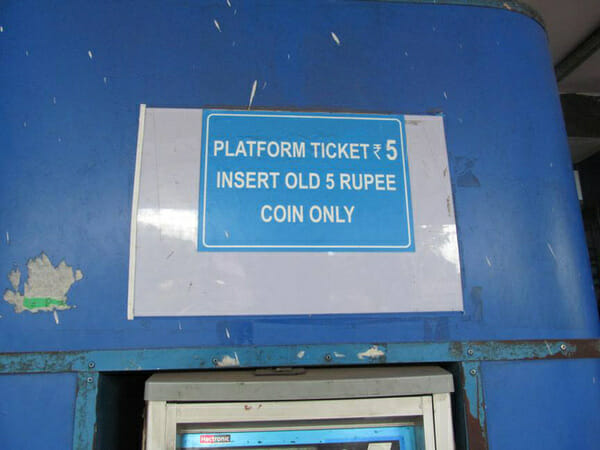 Hariharan Narayanan, who had come to drop his wife at the railway station said: "The city railway station has e-kiosk to dispense platform tickets. It accepts only old-five rupee coins. What is the use of such a machine?"

People often do not have change, especially when there is a constraint that only old-five rupee coins are accepted. With manual dispensing of platform tickets, congestion is back.

The machines were upgraded last after the budget session of 2012, much after the new-five rupee coins were introduced. C Narendra, Publicity Inspector of Railways, Bangalore says, "The machine is customized in such a way that it accepts only the size of old five rupee coins. The new five rupee coins are smaller and thinner and this is not acceptable by the e-kiosk machines". He said they are aware of the problem and are trying their best to fix it soon.

About Hansa Venkateswaran 1 Article
The author has not yet added any personal or biographical info to her or his author profile.

The best way to motivate citizens to shun personal, private vehicles is to provide credible and affordable public transport alternatives

A study was conducted across 198 wards of Bengaluru on the efficacy of the functioning of ward committees; Namma Bengaluru Foundation and its 600 RWA members will submit suggestions to the Karnataka Municipal Corporations (Ward Committee) Rules.

Why Tamil/Telugu music has no space in city FM?

The ‘cosmopolitan’ city Bangalore’s private FM radio stations have been broadcasting only Kannada, Hindi or English music. Why not Tamil/Telugu music, Citizen Matters explores, in part – I of the series.