Project Cinema City, a multidisciplinary art exhibition recently concluded at the National Gallery of Modern Art, Bangalore (NGMA) on December 2nd 2012. This project began as an effort to chart the relationship between cinema and Bombay/Mumbai and chronicle the imaginary space where the two converge. It is also a chronicle of Bombay’s metamorphosis into Mumbai.

I was fortunate to be able to attend a walkthrough conducted by Madhushree Dutta on November 24th. Madhushree is the executive director of Majlis, a rights discourse and inter-disciplinary arts initiative based in Mumbai. As the curator and producer of this project, she has been working on it for the past four years.

For me the most attractive aspect of this exhibition was the interactive presentation of an immense amount of raw data and abstract art. Madhushree took us through the installations and artworks with great enthusiasm and passion. It was clear that this project is her ‘baby’ and she knew each and every detail about it! 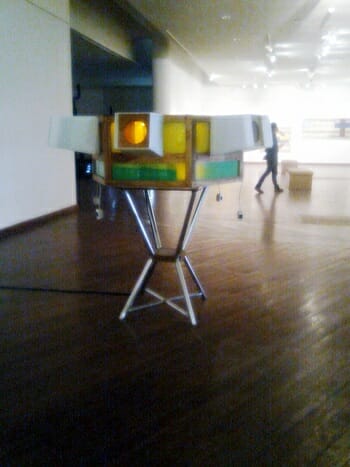 We first went to the ‘Table of Miscellany,’ a laboratory for exploring the cinema city of Bombay/Mumbai. It comprised timelines, books, rotating image boxes with photographs from Chor Bazaar in Mumbai, and a timeline juxtaposing historical events with film releases. Ranging from dates and population patterns to gossips and city fables, this information was presented in a raw form and left to the audience to interpret.

The next section was ‘The Calendar Project’ which broke the feeling of nostalgia created by the other exhibits. This social experiment of sorts engaged artists in creating calendars using old found material and current technology. The effect in its totality was quite stunning.

The other exhibits we went to were smaller in their scope and even more entertaining. Most of them represented the information contained in the ‘Table of Miscellany’ in a more abstract and artistic form. What stood out amongst them was a photo collage by Bangalore-based artist Pushpamala N. titled ‘Return of the Phantom Lady of Sinful City.’ This photo-romance depicted the journey of Phantom Lady, an imaginary construct much like Gabbar Singh, rescuing a girl from the land mafia of Mumbai. Not only was it a homage to silent film characters like Hunterwali, it also engaged the present by locating the action in contested sites in Mumbai. 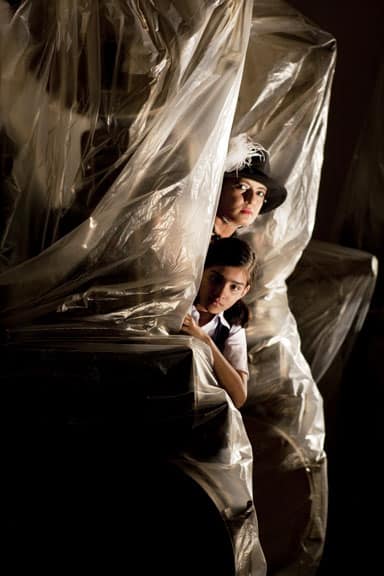 We saw several sound installations by artist Paromita Vohra, the most interesting of which was a PBX set with recorded messages. These messages included dialogues from films of 60s and 70s and seductive messages and conversations.

Madhushree informed us that the installation titled ‘Fourteen Stations’ was done by the well known artist Atul Dodiya. The installation consisted of a set of 14 paintings based on 13 railway stations of Mumbai and an imaginary one, ‘Atul station’. Each painting included an image of a Bollywood villain on the top-right corner done in photorealism style while the rest of the canvas was mostly texture, some text and abstract geometric shapes. I wondered if it was a deliberate pun that ‘Atul station’ was the only painting with a female villain (Bindu).

The most surprising part of the exhibition was a ‘Bioscope’ which presented random facts juxtaposed on images of Bollywood stars and the city skyline. Interestingly, the magic behind the artwork was deliberately demystified by peepholes that allowed us to see the mechanism of the machine.

The other exhibits were equally involving with a video animation installation where the viewer can see himself in the movie, a dark room with 13 micro monitors projecting stories from tiny production units that remain hidden behind the glamour and a map of the city made from PVC pipes.

All in all, the exhibition was an enjoyable experience for me because it merged easily-accessible ‘popular culture’ with the so called high-art. It also made me wonder about the narratives of Bangalore, my city for the past five years, and its legends and cityscapes. ⊕

About Seema Misra 2 Articles
Seema Misra is a self-taught artist and writer. She has been a part of the communications industry for over nine years and currently works at Hewlett Packard Enterprise as a Technical Writer. She also undertakes freelance projects for illustrations, content creation and social media marketing through her blog Lonely Canopy. (http://lonelycanopy.com/)
Website Facebook Twitter YouTube LinkedIn

How can policy and regulation help fix Bengaluru’s environment?

There are many laws that relate to greenery in Bengaluru, but they all need to talk the same language in order to actually protect greenery. Ambiguity in laws needs to be eliminated.