The festive season is on and boarding a train towards your destination seems almost impossible. Almost all the trains have lengthy waiting list and if anyone has not planned in advance, it could be a nightmare.

Deepavali is around the corner, and celebrated in almost all north Indian places. This is also the season for the annual pilgrimage to Sabarimala. Trains to Delhi, Howrah, Patna etc., show long waiting lists. The situation seems painful to an extent that people are willing to pay hefty amounts to touts for a ticket confirmation. 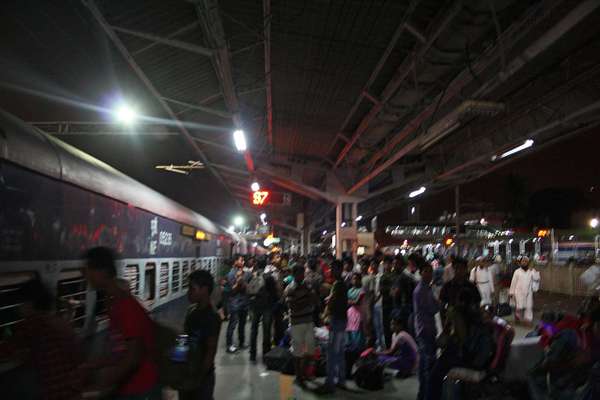 File photo of the passengers waiting to board the train. Pic: Abhishek Angad

Arun Kumar, an engineering student in Bangalore says that recently one of the agents asked him Rs 3000 for a sleeper class ticket which actually costs Rs 750. He adds, "We have no other options left except to avail this one. Some of my friends did not go because of high amount."

Rajan Anand, an IT professional, reminds how he had to travel by flight in order to reach his hometown in Bihar. He says, "During Dusshera I had to buy flight tickets worth Rs 15,000 owing to non-availability of tickets in trains."

Citizen Matters spoke to South Western Railways, Bangalore Division and found out that the Railways did start some special trains to tackle the rush. A senior official says, "We usually announce special trains during festive and peak seasons. Also, depending on the waitlist position we add extra coaches under certain criterion. Only trains running with 24 coaches, which is the maximum, cannot be increased any further."

According to him, in the month of October itself 85 lakh passengers booked an outward journey from Bangalore; 2 lakh more than the normal days. The 85 lakh number is based on a calculation made by a railway official to Citizen Matters’ query. However, many passengers complain about non-availability of tickets. Two problems lie at the centre of the issues.

1. Booking window starting four months in advance: As soon as the window opens, most of the tickets are booked within a month. Also, owing to the flight tickets becoming more costly these days, the thrust is more on trains as it is one of the cheapest mode of traveling. But some passengers complained that they are not able plan too early.

Prakash Mandoth,Ex. member ZRUCC (Zonal Railway Users Consultative Committee), Southern And Southwestern Railways and also, Chairman, Infrastructure Committee, FKCCI feels the same and says, "I agree that four months is too long. The reason is that the Railways is in financial crisis, so the government gets huge amount of money by advance bookings. In my opinion, one option to tackle this problem would be to make only 75 percent of the tickets available for the first three months and the rest 25 percent for the last month."

2. Tatkal: For citizens who are not able to plan the travel early, Railways have introduced the tatkal system to avail tickets. As of now, anyone can avail the tickets a day before the date of journey. As visioned to curb the touting activities, Railways decided to postpone the opening of bookings from 8am to 10am in the morning. This allows the common man to come in the morning and queue for tatkal bookings. Earlier touts and travel agents used to queue from midnight causing inconvenience to genuine travellers. This nuisance is now reduced.

Although the time change has been a welcome move, e-ticket bookings for tatkal have themselves become a pain to common people. This may be attributed to the low bandwidth as well as low server capacity of IRCTC – the official online portal for e-ticket bookings. The problem can be gauged from the extent that on a social media platform- twitter, #IRCTC has become a trending topic for last two days in Bangalore. Making a political pun on the matter, one of the tweets says, "At least one body does not allow reservations."

Keeping a track on touting activities.

According to the railway official, vigilance cameras are installed in the railway station premises to keep a check on touts. Also, a token system was initiated in the Bangalore railways for tatkal bookings.

The tatkal bookings seems to be perennial problem but the railways can think of some short and long terms plans to gear themselves tackling.

Prakash Mandoth suggests that the Railways take long term steps to address the problem. His recommendations are:

a) To run the winter Garib Rath daily with more stops;

b) Increase The Frequency Of Ajmer, Jodhpur and Jaipur Trains;

c) Increase the frequency of Duronto Express to Delhi;

College authorities invent a perfect system to detect security threats! A tongue in cheek yet perceptive look at the security arrangements adopted for a recently held college fest.

The risk of car theft is something most of us live with world over. Combating it appears to be getting easier with the cell phone technology based tracking solutions available. See what’s on offer.