With his halo of white hair flying out behind him, India’s famed "snake man" Rom Whitaker jogged on to the stage at Opus, a cafe on Palace Road, in the evening of 12th October. He held forth on King Cobras in front of a packed crowd for over an hour. Organized by the volunteer run, public science initiative Café Scientifique, the event called Radio Kings was the first in a monthly series aimed at dismantling the barriers between scientists and the public. 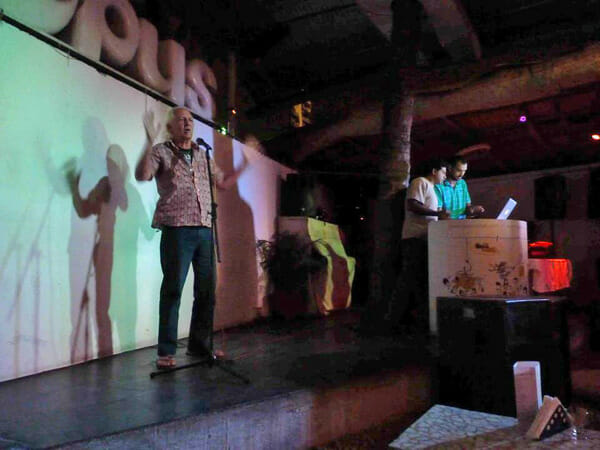 Based on the French café philosphique model, Café Scientifique originated in England, quickly gained popularity and spread to other countries. Typically, one monthly evening meeting is organized in a café or bar to which one or several scientists are invited to talk in layperson’s terms about their work in a topical or even controversial area. In Bangalore, Café Scientifique promises to facilitate dynamic and thought-provoking interactions between practising scientists and interested members of the public. The essence of this café is informality and inclusion. The meetings take place in cafes, bars or any viable venue, but always outside of the traditional academic context.

While the crowd threw back beers and sat riveted, Whitaker traced the trajectory of his groundbreaking study of King Cobras. Short video clips interspersed the PowerPoint presentation and brought the secrets of Agumbe to the city courtyard.

Detailing his own first encounter with a King, followed by the acquisition of the land that today makes up the Agumbe Rainforest Research Station, Whitaker then spoke about the discoveries made through the radio telemetry project. By implanting a total of four Kings with radio transmitters the research team was able to track their movements over a period of four years. Incidents of cannibalism, the importance of individual home ranges, the thermal ecology of nesting females and even male combat were recorded over the next half-decade.

Dissecting the ecology and behavior of kings and understanding the unique relationship that the people of Agumbe share with Kings led Whitaker to the topic of snakebite in India. Every year over 50,000 people die of snakebite. Yet, despite this number, snakebite mitigation and treatment is a neglected area of study.

Explaining the geographic variations in venom composition between the same species of snake, Whitaker touched upon the significance of sustained research in this field. Under his guidance, the Centre for Herpetology has been conducting expeditions across the country to study the venom of the Russell’s Viper, a snake notorious for its aggression. After a brief explanation of snakebite protocol, the floor was opened to the crowd. Discussing ideas, asking questions and stating their opinions, Whitaker engaged with the over 100 people strong audience about his life and work.

Even as the stage was handed over to the Friday night party folks, Janaki Lenin, Whitaker’s partner (in crime) set up a table to sign copies of her newly released book "My Husband and Animals". The book is a delightful, witty compilation of her weekly column that chronicles the adventurous life Whitaker and Janaki lead. The husband – wife duo continued to banter and joke with the crowd long after Café Sci officially closed.

Like any unique initiative, Café Sci has some passionate people behind it. They include Bangalore’s well known conservationist Gerry Martin, founder and director of The Gerry Martin Project (TGMP). Incidentally, he was the National Geographic television channel’s first Indian adventurer and has helped children learn in an experiential and outdoor-based curriculum through iDiscoveri Education.

The others involved are Nandini Rajamani, a researcher in evolutionary biology and science communicator; VV Robin, whose research interests broadly cover bio-geography and behavioural and evolutionary ecology and Cara Tejpal, a wildlife conservationist working with TGMP.

Watch out for the next session on Flying Insects by Sanjay Sane scheduled at 7.00 pm on 22nd November 2012. Here’s a bit about what’s in store:

Insects are the earth’s most successful inhabitants as they first evolved flight and have dominated the aerial habitat. They can fly with exquisite speed, control and manoeuvrability, flapping wings often at hundreds of wing beats per second. Each wing stroke is finely controlled by a system that acquires sensory input through sight, smell, heat, etc. and communicates to the central nervous system, which responds through movement of head, legs, wings et al. To understand how flies chase other flies or moths hovering over flowers, a multidisciplinary study of the relevant chain of events is essential.

Open to all, free of cost and with the assurance of dynamic speakers every month, Café Sci caters to Bangaloreans looking to take an intellectual plunge into the unknown!⊕

About Cara Tejpal 1 Article
The author has not yet added any personal or biographical info to her or his author profile.

A group of 26 artists from Kerala exhibited their paintings at Karnataka Chitrakala Parishat. The IIC gallery hosts an exhibition of the cartoon collection of K R Swamy, titled ‘Laughter Dose’.

From handling panic to keeping themselves safe, nurses have challenging times

They dedicate their lives for patient care. But what does it take to do what they do? What sacrifices they have to make? All in a day of a nurse.