A PIL, questioning the deletion of lakhs of entries from the current voter rolls has come up for hearing at the Karnataka High Court. The court heard the case on November 6th.

The PIL has been filed by Commander P G Bhat of Daksh, a Bangalore based organisation working towards accountability in politics and governance, Ashwin Mahesh of Loksatta party and Smart Vote, a campaign that encourages people to vote. The petitioners have named the Election Commission of India (ECI) and the Chief Electoral officer (CEO), Karnataka as their main respondents, along with four other Electoral officers from Bangalore zone. It was filed on 18th September, 2012. 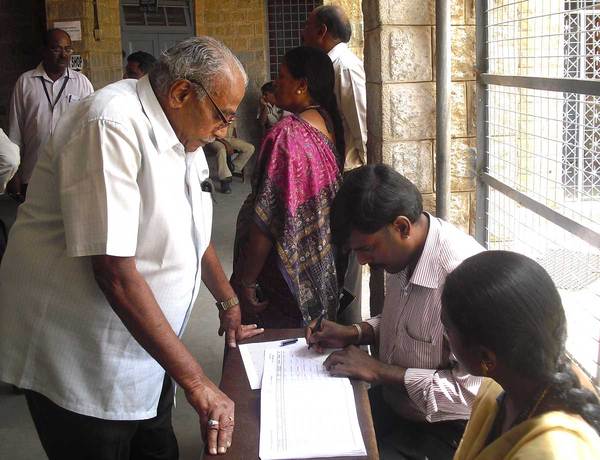 The petition has documented a long list of blunders. The biggest of them is that entries of 10 lakh voters (one million) have been deleted for the Bengaluru region. These voters, the petitioners say, have been deleted mostly because they moved residences or did not have Electoral Photo ID cards (EPIC cards).

Petitioners claim that when the special revision took place, starting 16th April, 2012, EC was to go door to door and collect the information, which did not happen. Petitioners also claim that the large number of apartments that have come up in the city have not been included in the door to door enumeration campaign, leaving out thousands of voters.

Petitioners say that a basic enquiry yielded that several voters, from the roll were in fact still living in the same addresses, as the ones they had registered. They say that these names were most likely deleted because these residents did not have EPIC cards. Although the ECI has directed the CEO, Karnataka and other electoral officers to ensure that all registered voters get EPIC cards, this has not been done.

Petitioners suspect that these names may have been deleted to comply with the ECI’s rule that says that all voters should have a photo ID card. Petitioners say, that enmasse deletion, will force the voters to re-register, giving another opportunity to the ECI to comply with the rules. It is however not clear if ECI, did infact issue a directive, to remove the names of those who did not have EPIC cards.

The petition also notes that nearly 86% of the deleted voters were not issued unique voter identification numbers, the reason given for deletions,however, was that all these voters had shifted residence. The petitioners argue that it is ‘highly unlikely that all of them did indeed shift or change their residence.’

Other issues in the electoral roll

The rolls also have several people with same voter ID numbers. Around 2,000 voter names are repeated, several names have been misspelt, addresses are wrong, incorrect relationships and gender have been assigned to the names in several instances.

During the BBMP elections in 2010, there were 69 lakh voters registered in Bangalore but in the current state electoral rolls there are only 57 lakh voters. However the population of the city has been growing at a rate of 3.25% per annum, so ideally the number of voters should have gone up.

Petition also says that though ECI had directed CEOs of all states to standardise electoral database, back in January 2010, so far this has not been done.

Once the PIL was filed on 18th September, there were two emails from the CEO’s office saying that this (viz. using of software to clean up the electoral rolls) cannot be done.

P G Bhat says the software, his or any other similar one, can be used to effectively identify the errors in a shorter period, hence speeding up the process.

The PIL, requests the Court to direct the ECI to do an ‘intensive revision of the electoral rolls’ within three months from the date of commencement.

As noted at the beginning, the High Court heard the PIL on November 6th. It has directed election authorities to respond.⊕

Our weekly scan of Bangalore’s Kannada dailies includes reports on BDA planning to develop 12 lakes to BBMP plans for flyovers and underpasses.

Namma Bengaluru Foundation organised a meet up of BBMP candidates, to understand their perspective on problems of people. This what transpired there.

Bengaluru residents get a low down on water management

With every apartment association stressed by the responsibility and escalating cost of water supply to residents and waste water management, the water workshop helped provide a few possible solutions.