This past weekend, around 50 youngsters from diverse backgrounds including designers, entrepreneurs, web developers, photographers and farmers amongst others, brainstormed the ideas for sustainable living. This was the Bangalore edition of the Global Sustainability Jam.

The event started on 2nd November, Friday evening, and ended on 4th, at the ThoughtWorks office, Koramangala. Seven teams proposed designs for sustainable solutions for any problem around the theme ‘heartbeats’.

Sustainability Jam is conducted world-wide to propagate sustainability enabling the people to learn and find design based approaches to problems in any field – environment, financial or social. Participants slog over a weekend for 48 hours on their projects.

Sushant Chavan, co-host of the event says that the concept of Jam is being propagated by an organization called ‘work, play and experience’ based in Germany. He adds, “Sustainability jamming is very similar to music jamming where musicians practise together to create something new. The same concept is applied here, people discuss ideas using design thinking approach to create a solution.” 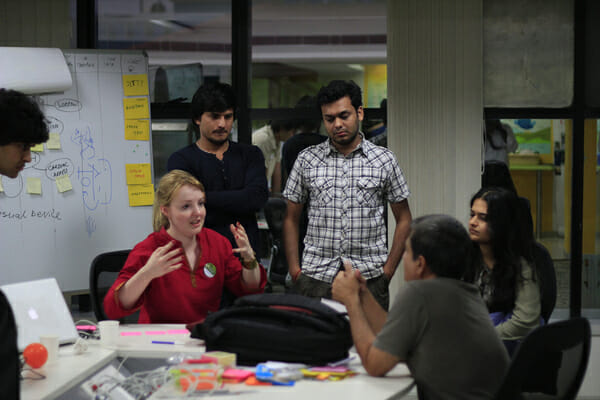 Letting people learn about cultures through stories would be a step towards preserving them, felt the team 8 balls, and created a project called ‘Magic Cities’, to capture the city’s pulse. The project aims at developing a platform, where people would share their cultural stories and then connect with the local communities and tourists. The team feels the revenue model could be advertising, gamification of the concept, and hotel deals from tourists platforms.

Another idea to solve the disconnect in society, where people have become so busy that they hardly know about each other was the ‘Green Lungi’ idea by the team Gee Gee. A rather wacky idea, their project was named ‘Snoozitude’. The team believes that the world is always on snooze and their aim is to ‘unsnooze’ them by changing individual attitudes.. They engage people in a fun way, meeting people, talking about sustainability, making them wrap a green lungi and say “I am awake”!

Team Ecoden worked on ‘education for the first beat’. Their idea for sustainability was effective parenting. The work involves going in rural areas and getting the concepts across using theatre, lifestyle activities and personal consultation.

Focussing more on human interactions, team Earth Junkies presented ways to bridge this gap through their project, ‘Living Bridge’. Their idea was to load a mobile caravan with movies, books, food and then connect to people. They would showcase sustainable ways of doing things. E.g. the van would use solar energy for cooking.

There were some practical ideas some of the teams came up with.Team Recycle Bin presented the project named (Haat)Beats, to bring consumers directly in contact with the farmers growing organic products, to help farmers would get a better price and consumers can take ownership. A prototype of this model was developed.

Another team, Green Beats showcased Treevolution project with a punchline ‘Creating sustainable lifestyle for urban cities, with a prime focus on food culture’. The idea was to educate the masses via applications and allow consumers to find and buy green alternatives for any product they want, and get educated about reuse options for goods.

The team Yellow Dreams through their project ‘Rediscovering Human Energy-Spark’ worked on the solutions for a sustainable park that uses human energy to provide lighting at low cost. In Koramangala III block Park, they found out that the park uses 14.8 MW of electricity every year.

Yellow Dreams won the first place. Team member Vijay Nambiar, a freelance interior designer, says people have to stop complaining about BBMP or BESCOM. He adds “The idea is to not to do anything new but still create something useful. So we thought of generating power without forcing anybody.”

Shriram Kuchimanchi, owner 500 eco, a portal to propagate sustainable practices, and also one of the mentors of the event said that it was exciting to see all the creative ideas at the event. But as a mentor he shared, “In some of the ideas, there was no reality check and also, most of them were very much tech oriented which will not solve the problems in real world.”

Snehal Trivedi of the team Earth Junkies, a designer turned farmer from Pondicherry felt that the event was too technology oriented in a country where 97 % of people are not tech savvy. He added, “For me the ideal place for a sustainability jam would be a farm. In the most interior of villages, people have a solution for everything. These are the jammers we need to share.”

Bangalore’s Big Banyan Tree which spreads over five acres and the second largest in the country attracts a lot of visitors everyday. Over 400 years old, it surely symbolises eternal life, as is believed in Indian culture.

Nine rock bands from the city competed for a spot on AIR’s FM Rainbow channel. For the audience it was an aural treat with various kinds of music.