At Sobha Althea & Azalea, we are a motley group of women coming from various backgrounds. We were thinking of putting a waste management system in place even before the BBMP legislation came into force. But for some reasons, it didn’t take off.

The legislation was just the kind of nudge we needed to get going and start thinking about the HOWs and WHYs.

How to start
Non-negotiables
Negotiables
Training

A string of meetings helped us frame certain guidelines for our own residential community while keeping in mind the larger picture: A waste-free zone. 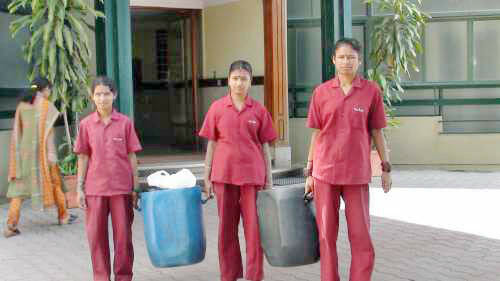 Housekeeping staff are key to the success of any waste management project. Pic Savita Hiremath

1. Get the Green Committee (GC) members together: This is the first step. If the GC members are not like-minded and united, then the community won’t give a hoot about your rules. In many cases, committees are either inactive or suffer from absenteeism. A couple of get-togethers can kick off unprecedented bonhomie and help focus on work. If each one gets complimented for the sincere work they do, team work becomes a pleasure and truly rewarding.

3. Put necessary infrastructure in place. Labeled bins for storage and others for collection. Make sure housekeepers have safety equipment like gloves and masks. Tie up with agents for dry waste recycling. If you are going for community composting of wet waste, make sure the entire workforce is trained along with one or two GC members.

4. Prepare a Dos & Don’ts file on waste segregation before informing the community that the exercise will begin on a certain date. Let this be as comprehensive as it gets. Send the printed note to all the flats and secure their signatures to make sure that nobody feigns ignorance later. Put up notices on your apartment mailing list and community’s Facebook page and spread the message through all other active email groups.

3-bins put out by each household everyday for dry, wet and sanitary waste. Pic: Savita Hiremath

A dry waste bin in the garden area.Pic: Savita Hiremath

Labelled bins kept in each block near the lift for easy disposal. Pic: Savita Hiremath

5. Train the housekeeping team first and keep the Facility Manager in the loop (training methodology given below).

6. Notices & reminders: Put up notices wherever possible. Create an atmosphere in community areas with colourful posters. Use apartment mailing list, Facebook, personal ids for spreading information on upcoming training sessions/meeting and also Dos & Don’ts. Create a sense of urgency so that people are pressured to attend the meetings. Do not reveal when the next session will be held. Warn of serious action if people fail to comply.

7. Invite residents to take part in the cause. Call these meetings "interactive sessions", not "trainings", as some residents may already know a lot about segregation and their knowledge/intelligence should not be underestimated. If the turnout isn’t good, persist and call for another session.

8. Get the children involved. Holding a get-together, a drawing/painting activity session or even a competition on this topic will generate instant curiosity. Request the parents to sit along with their children to draw/paint. Use these as posters and put them up in important spots in your complex.

9. Given the demographic makeup of Bangalore’s population, it’s a given that people come here from various places/speak various languages. In our complex, a good chunk of people flit in and out of India often and there’s a chance that they may miss out on the local socio-political developments. There are certain subtle contextual nuances that those new to the city may not get. When it comes to dealing with issues like waste segregation which needs co-ordination with your domestic help and cooks (most of whom may not know English) day in and day out, developing a CONNECTION with them is a step taken in the right direction. 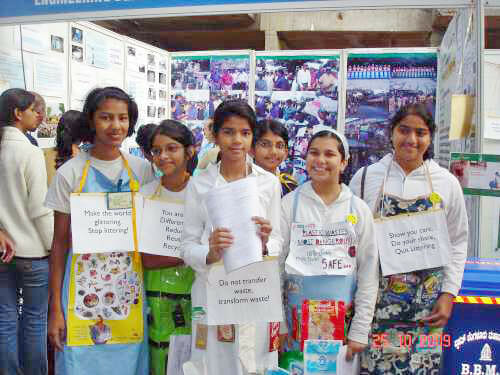 10. But first, build a backgrounder. In the meetings, brief the people on how it all began and where we are headed. Tell them about how hellish life got for people in Mylappanahalli, Mavallipura and Mandur landfills. Most people may not know how BBMP dealt with tonnes of garbage all this while. Be prepared for such ‘revelations’. Once the backgrounder is laid bare, get down to specifics.

11. To make anything work, there WILL BE and HAVE TO BE certain negotiables and non-negotiables.

In our case, NON-NEGOTIABLES included the following:

Many of our residents initially found this practice pretty cumbersome and "stinky". We stuck to our guns and said that newspaper sheets lining will not leave solid leftovers/residue sticking to the bin and will be easy to wash.
So far, so good! 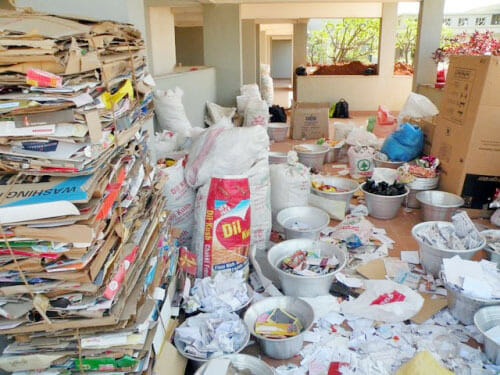 Every residents should understand the story of trash. Pic: Mayank Rungta.

Attendance is mandatory. Those who attend get their identity cards signed by GC members on the spot. If residents remain cold to this rule, tell them this will help them in more than one way:

Explain the backgrounder. If you just say "put wet waste here and dry waste there", they don’t see the value behind the exercise. You have to explain WHY it has to be done and WHAT will happen if we don’t follow the rules.

It’s natural for domestic helps and cooks to think that we are stretching this segregation thing a bit too far and adding more burden to their already difficult lives. But if you tell them clearly that they are some other people-pourakarmikas-whose lives are even more difficult, they begin to CONNECT! This has been the case with our electricians, plumbers, security guards, drivers, gardeners, etc.

Explain how we think everything that rots is "stinky". We have to lay bare our own stupidity in front them and laugh at it and invite them to learn from our mistakes. They will begin to think educated people also make mistakes and are also learning just as they are.

To think that they don’t get the larger picture of environmental health is a bit too condescending. If you get them to talk, you will know life has taught them a good deal. We have found that, if explained in simpler terms, they are able to get scientific details, too.

If they remain impassive/indifferent to rules on rinsing milk/food packets, collecting wet waste directly in a bin without lining, remind them that this is exactly what they are doing in their houses, too.

Make sure that the entire workforce employed by an individual household attends the training. Otherwise, blame game starts in no time. We have experienced this.

In a few cases, we saw some thinking residents sitting along with their maids in the training sessions. This in itself made the workforce realise how serious we all were and how we wanted the rest to be involved to make it a success. Nothing can work better than this! If we are serious, we don’t see why our helps can’t get serious.

Ultimately, nothing much can be achieved if the helps/cooks do not co-operate. Let the residents decide how they want to reward them when they do a good job. Sometimes, just a compliment will go long way in achieving compliance. 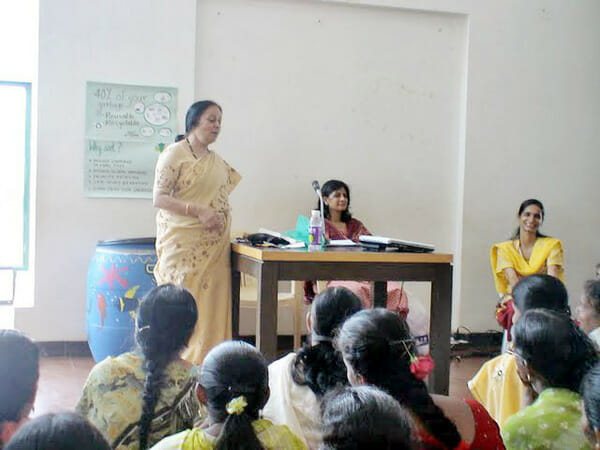 TRAINING FOR THE REST OF THE WORKFORCE

You may wonder why train electricians, plumbers, security guards, drivers, gardeners, etc. But we can’t do without their co-operation. They often dispose of waste after cleaning cars into wrong bins. Electricians dump e-waste just anywhere and so do plumbers. It’s essential that they know the basics of segregation as some of them eat lunch in the parking lots, smoke and drink tea, and throw the leftovers, beedis/cigarette butts and plastic tea cups just anywhere in the car parking areas. Paan/gutka stains and spitting into sand buckets are also issues that need immediate action. In short, anybody who enters the complex should know the rules in place.

Follow the same method of explaining the backgrounder before talking about types of waste. Help them connect with your message. Be warm and receptive. Be ready to entertain their views and complaints. Talk beyond segregation and show them that you care for their welfare in general. Try to SINCERELY look into complaints if they have any. Once trust is established, it’s becomes relatively easier to enforce rules.

We have realised that selling dry waste fetches a decent amount of money. A part of it can be used to incentivise the housekeepers who deal with stink and dirt every day. Tell them it will all get mutually beneficial if the collective aim is achieved.

Enforce punitive measures, if necessary. However, remember that the ultimate aim is NOT to punish people, but to achieve 100% compliance. For that, be ready for any number of trainings/monthly sessions as you move on.

Remember it’s a marathon, not a sprint. You’d rather lose some battles on the way when you know you are out to win the war. Patience is of paramount importance!⊕

About Savita Hiremath 7 Articles
The author has not yet added any personal or biographical info to her or his author profile.

BMTC cuts Volvo deal for IT majors on ORR

This week, another attempt to get well-heeled infotech sector commuters to drop their vehicles and use buses began. BMTC and the Outer Ring Road Companies Association put this together.