If you have voted in previous elections, have a voter ID card, and have not shifted your residence, still your name may have been deleted from the electoral rolls. Please verify and restore your name if deleted.

In the last post we discussed that time, effort, and financial cost involved in voting should be lowered to increase voter turnout. Electoral organisation in Karnataka has created such costs by flouting rules and defying common sense. The burden of correcting the errors is on hapless voters who are not even aware of the mischief.

On 18 April 2012, CEO’s website www.ceokarnataka.nic.in published draft voter lists for 27 constituencies of Bangalore districts in English. CEO modified them and published a newer version on 20 July 2012. Other voter lists of Karnataka are published in Kannada, making it difficult to summarise and analyse. A week ago the English version is removed for Bangalore constituencies too, leaving only Kannada version. My analysis is based on the English version which was once available to public. The voter lists for Bangalore districts are maintained by BBMP and the website is controlled by CEO.

Each constituency has several parts. Each part has a voter list and a booth. The 27 constituencies together have 6389 booths. Number of voters in these booths ranges from 27 to 2790. The voter records in a voter list may be original, added, modified, or deleted.

In a heinous act, the electoral system in Karnataka has indiscriminately deleted about 10 lakh registered voters from the list of about 67 lakh voters. Reasons are marked as ‘Delete Reason: E-Expired, S-Shifted/Change of Residence, Q-Disqualification, R-Repeated’

Shockingly, in 97.43% deleted records, reason code is ‘S’ indicating that the voter is not living in the address. In my street, 99 voters are deleted. On visiting house to house, I found 40 of them living in the addresses for more than a decade. They have been paying house tax and various other bills to government owned utility services. None of them was aware that their names were deleted from the electoral roll. They did not receive any communication from CEO/DEO organisation about the deletions. Similarly, records of many of my friends and relatives are deleted. I know that they have been living in their houses for long.

The deletions giving reason code ‘S’ are not for the quoted reason, but to cover up some grave errors in the electoral rolls, committed by the authorities. CEO and BBMP know that people marked as shifted have not shifted their residence. BBMP, which maintains the voter lists, also collects house property tax. From their own records, it is simple to check if the occupants of a house have changed. 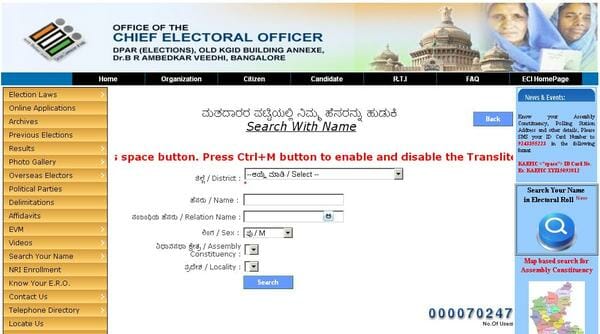 Check your name in the rolls in the tool: CEO Karnataka website

The CEO and BBMP authorities deleted lakhs of voters to cover up some lapses in the records created by them. They have no ethics to own up the errors and no desire to correct. Blaming the citizens for their ‘apathy’ is an old game when apathy is in the officials responsible to maintain the electoral rolls.

Election Commission letter No.23/2012-ERS-Vol-III of 6th October, 2012 states, “Deletions in polling stations where the number of deletions exceed 2% of the total electors in the voter list of the polling stations” the deletions must be cross verified.

The CEO / DEO have not cross verified the deletions.

BBMP officials insist that it is the responsibility of the citizens to check if their names are in the voter lists and re-register if not found. On 19 June 2012, the IT specialist of CEO could not find the CEO’s name in the voter lists though it exists. That speaks of the quality of data and search feature. When we don’t find our names in the list, chances are that our names exist. If we register again, our efforts are wasted, increasing the overall cost of the electoral system. The lists already bloat with duplicate and fake entries. Re-registration of voters will further increase duplicate entries.

What you can do

If your name is deleted from voter list, approach the ARO of your ward with details and ask to restore the status. If you can provide information on people in your neighbourhood, colony, or apartment, that would be better. Work with your RWA or any NGO interested to help.

On 22 October, DEO South agreed that voter status will be restored if the reason given for deletion is found to be wrong. We have to test if his promises hold good.

I can give details of deleted voters by street address, by booth, by ward, or by constituency. You may reach me by clicking on "write to author" link above. ⊕

Reserve Gandhi Bazaar for pedestrians only

Gandhi Bazaar is noisy, chaotic, unsafe for shoppers. Here’s a way to make it more people-friendly.

I managed to vote but others not so lucky didn’t find their names in the rolls.