Last year he called it Holiween. I didn’t make any attempts to correct him and he didn’t remember it beyond that point either. Why bother when it isn’t a festival that belongs to us? 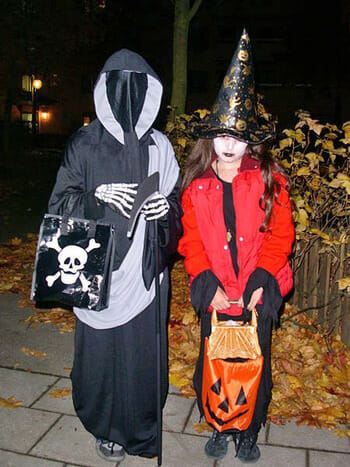 This year, he is close to seven and the Halloween monster has struck us hard. We now know the correct pronunciation and the fact that it’s an American festival that has "something to do with ghosts". We also know somewhat hazily about pumpkins and trick or treat. The problem is we live in an apartment complex that isn’t as Halloween friendly as the son (and some of his friends) would want it to be, despite a sizeable number of return to India crowd. Surprising really (though highly relieved if you ask me), because Bangalore seems to have embraced Halloween as much as Holi and every other apartment block is hosting a ‘Halloween party’.

Saloni, who runs activity classes for kids in Arakere, says she has had requests from some mothers to do Halloween related activities. Saloni looks at it as a fun activity and thinks that it’s a good way to get the fear of ghosts and spirits out of children’s minds by turning it into a festive thing. Must say I like that angle of thought.

Kriti, mother to a 6 year old and resident of an apartment complex in Puttenahalli, thinks it’s fun too. "We’ve had Halloween parties in our apartment for the last two years and I think of it as a kids only festival, at least here. It’s good to see the kids all dressed up in funny costumes and excited though we do have to explain the concept to many who are unaware when they go asking for candies."

While Kriti sticks to basics like pillow covers while dressing up her son in ghoulish costumes , some moms are ready to buy special outfits for their kids to stand out in. In fact a discussion on Halloween costumes on a Bangalore mother’s group in Facebook throws up quite a few names all over from BTM to Whitefield.

Some people I know wonder what the fuss is all about. "It was fun when we lived there for the children as in US it is an old custom but I see no point in Halloween parties here as the concept is a borrowed one and not known to many," says Sumita, mother of a 10 and 8 year old who says her kids don’t miss Halloween. "We have enough festivals of our own to be excited about," she retorts.

Ankita, who runs art, craft and storytelling classes in Whitefield would also prefer to celebrate Indian festivals than focus on Halloween. "The idea is sweet but I would rather teach our kids about the desi festivals first and celebrate those than latch on to Halloween just because it seems to be the latest trend."

Curious whether it is a Bangalore only trend, I called some friends in other cities. My friend in Kolkata was quite amused and said this was the post Durga Puja recovery phase so any other thought doesn’t occur to her. My friend in Gurgaon, near Delhi did laugh and say yes, her kids have succumbed to Halloween mania. Given the high R2I population in Gurgaon, perhaps it’s a hangover thing?

For most moms it seems to be a ‘if-my-kid-is-happy-I’ll-go-along’ kind of thing. One creative mom I know even baked a batch of cobweb cookies for her kids!

Then of course there are some fence sitters like me. I’ll keep it Holiween as long as I can. Then who knows, I’ll probably just go with the flow. So what’s your take?⊕

Much coffee-table talk in Bengaluru is about how the city has such poor planning. This Citizen Matters investigation exposes how unqualified BBMP and PWD engineers get into plum sanctioning positions.

An opportunity lost for Hindi cinema

Linear narration and less than nuanced performances lets ‘7 Khoon Maaf’ down. Music is the only highlight.

The birth centenary of Prof. V T Srinivasan, one of the founders of Bangalore High School and Vijaya College should be celebrated in a befitting manner.