As the 4th Namma Bengaluru Awards are announced today, a panelist who helps identify and pick the winners each year spoke of why the awards matter. A retired IAS officer, K Jairaj, said “Being on this panel is exciting because we discover those in the shadows; ordinary people who do extraordinary things. They toil in the background, never asking for recognition or fame; never claiming the adulation and applause that is rightfully theirs. It is their individual and collective effort, commitment, hard work and dedicated service – often beyond the call of duty – that has made Bengaluru the city it is today. The Namma Bengaluru Awards are a platform to make sure the city’s real heroes are finally saluted.” 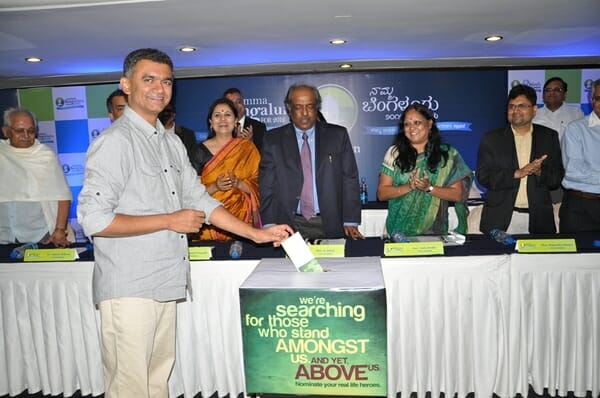 The NBA nominees are those who earn the title of hero, except not of the celluloid variety. Instead, these are the men and women who truly deserve the title – the ones who go above and beyond the call of duty to answer a higher call: that of humanity. And they’ve been nominated as heroes by those who truly make or break heroes: ordinary citizens. That citizens are as keen to celebrate these heroes is evident from the staggering number of nominations received: 4,000 in 2009; 10,000 in 2010 and an incredible 14,000 last year.

But citizens’ awards, while being the most democratic way to honour the true doers who make Bengaluru the sparkling city that it is, come with a responsibility: to help bring these heroes into the forefront by nominating someone you know who is doing extraordinary work.

That’s why the NBF is privileged and proud to announce that nominations are now open for the 4th edition of the awards, and invites citizens to submit worthy contenders.

Past winners include an extraordinary citizen who cares for destitute in the city; a sweeper nominated by a grateful citizen for taking exceptional pain to keep their street clean and an individual who takes responsibility for cremating unclaimed bodies according to their religious customs.

Significance of the Awards

Perhaps no other forum offers every citizen – be it teacher or student, corporate head honcho or startup, to matter equally. Every Bengalurean is given the opportunity to nominate their heroes –  and even more interesting, winners aren’t chosen based on volume of nominations but on the quality of the work being nominated –  giving an individual nomination the power to count more than a dozen.

For every citizen who has ever felt that their voice doesn’t count, that their individual opinion means nothing – this is your chance to demonstrate the power of 1. Nominate someone today!

Process Validators: Internationally renowned audit and process firm KPMG have been appointed as validators to ensure transparency in the process of nomination and selection of the winners.

This year NBF has introduced two new categories for the Namma Bengaluru Awards.

Corporate Social Responsibility (CSR) – Corporate establishments in Bangalore over the years have evolved in their CSR initiatives to bring about an overall positive impact on the communities, cultures, societies and environments and are now integrated with the pressing needs of the city which has made a significant difference to the society and improved the overall quality of life.

Media Awards: "This year, the NBF has expanded to include a crucial sector in its bouquet of awards: the Media.  In its endeavor to strengthen and support institutions and individuals who are agents of change for a better Bengaluru, the NBF acknowledges the invaluable role that journalists and media organizations play. In the past couple of years as the city increasingly grapples with countless civic, social and environmental issues, the media has played a stellar role not just in highlighting them but unearthing stories of violations and violators. By doing so, the media has kept the city’s conscience alive and ticking. We therefore invite the public to wholeheartedly nominate such media persons for the Namma Bengaluru Foundation Awards” said Vasanthi Hariprakash, independent Media Personnel and Jury Member, NBA 2012.

Send in your nomination

Namma Bengaluru Foundation (NBF) is an independent organization committed to the betterment of the city of Bengaluru, through collective social engagement. NBF aspires to be the champion of change for a better Bengaluru which is livable, inclusive and responsibly governed. Namma Bengaluru Awards (NBA) is our flagship initiative that recognizes and rewards those nominated by Bengalureans for their contributions to the city and our local community. NBF’s mission includes strengthening and supporting the institutions and individuals alike by building and nurturing partnerships. As the voice of citizens, NBF empowers and creates a platform to scale individual contributions to generate sustainable and impactful improvements to the city.

Nirbhaya documentary debate: An opportunity to re-define our future

Though BBC’s ‘India’s Daughter’ has been banned, the debate around the documentary creates an opportunity to think about how we can make the future safe for our children. Inculcating a value system and making children a part of policy formation process is the way to go.

How Bengalureans use Whatsapp to connect and solve civic problems

You thought WhatsApp is all about fun, family groups and fake news? Wrong. Bengaluru is proving that WhatsApp can be used to connect, collaborate and participate in governance.

While the Election Commission has been directed to complete BBMP elections on or before May 30th, there are forces in play still looking to postpone it. Namma Bengaluru Foundation shares a background on Bengaluru’s elections.