On October 13th, Bangalore University (BU) demolished a compound wall that was illegally built in its land. This 1 acre land has been with BU for almost four decades, since 1974. But the university has never been able to make use of it. The land is located right along Outer Ring Road. According to BU Registrar B C Mylarappa, the land value is around Rs 15 crores.

Interestingly, this land was not randomly encroached, but was granted to another party by the government itself in 1995. Government granted it to Kanyakumari Vidya Samsthe (KVS), an educational society, at the cost of Rs 16.5 lakhs. In the 1974 order, government had given the land to BU free of cost. 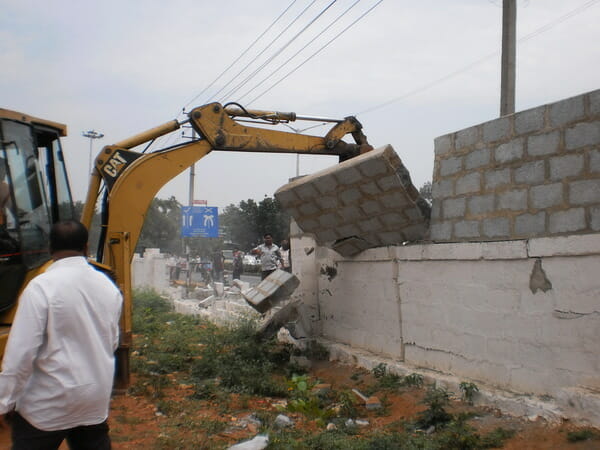 The compound wall being demolished on October 13th. It is located along the Outer Ring Road. Pic: Navya P K

KVS has a school named Kanyakumari High School right behind the one acre land. It had applied for the one acre land for new buildings and a playground, says H Thukkaram, Principal of the school. Thukkaram’s father Hombanna is Secretary of KVS.

BU has been fighting many court cases against state government and KVS, to get the land back. KVS has filed many cases as well. There have been 5-6 petitions and appeals so far. As per the last High Court order, the land belongs to BU itself.

But in a later appeal, HC said that the issue should be settled in civil court. Mylarappa says that BU will soon go to the civil court to get a final decision.

The disputed one acre land is part of survey number 32 of Mallathahalli village. Overall, this survey number has 15 acres of land.

Of the 15 acres, 13 was given to BU free of cost, and 2 acres was reserved for building a road. In the 2 acre land, BDA built the Outer Ring Road in ’88. BU’s 13 acres is spread out on either side of the road now. On one side of the road lies the disputed one acre land. On the other side lies the university campus.

In ‘98, BU got the first High Court order favouring it. HC struck down the land grant to KVS. When KVS appealed against this, court again said that the land belonged to BU. But it also said that government could check if any remaining land was available for allotment to KVS.

Based on this, government did a survey and granted the same one acre to KVS again in 2002. BU took the issue to court again. Government justified its decision saying that this one acre land was extra. It said that the road was not built in the reserved two acres, but in BU’s 13 acres. Because of this, the land originally reserved for the road, is still free, government said.

But court said that government’s version was dubious, and that its documents cannot be trusted. BU, on the other hand, brought documents to prove that the road was built in the reserved two acres itself. Court was convinced, and it again ordered that BU owned the land.

Citizen Matters has a copy of the initial government grant order to BU. A sketch clearly shows the area marked for BU, and the two acres separately marked for the road.

But KVS did not stop here. It filed another appeal to the HC. This time, court did not express any opinion. It said that only a civil court could investigate the issue. Instead of going to civil court, BU directly approached the Supreme Court. SC suggested mediation between the parties, but BU was not ready for a settlement. Finally SC also dismissed the case without any judgement.

Though there was no decision in the last two cases, the 2002 order was in favour of BU. Hence university continued to own the land.

But around 3-4 months ago, KVS built a compound wall surrounding the one acre land, separating it from the main road. It also built structures such as a library, classroom, and couple of other rooms for commercial purpose.

On October 13th, BU demolished the wall and other structures. Revenue department officials  came to the site and confirmed that the land indeed belonged to BU. Seven days’ notice was given to Hombanna to clear the other structures so that they can be demolished.

Now that the demolition has been done, BU plans to go to civil court to settle the dispute. “Once the civil court case starts, it may stretch indefinitely. Hence the idea to demolish the encroachment now, so that we can start using the land,” says a survey consultant for the university, on condition of anonymity.

Meanwhile, residents nearby have another problem. Their layout – Mallathahalli extension layout – lies beyond the disputed one acre plot. The plot separates their layout from the ring road, hence residents cannot access the road directly.

They say theirs is a BDA layout, and was included under BBMP during its expansion in 2008. Most residents had bought plots here in the 70s and 80s, and had been using a kaccha road across the one acre plot, to access the main road. This kaccha road from the layout to the road, was only 30 feet long.

If they cannot use the kaccha road, the only other option is a roundabout road, which is almost one km long. This road is narrow, and it is difficult for big vehicles to access the area directly.

Now that BU is reclaiming the land, residents are pushing for a public road to be built across the disputed plot. “We may approach the government, requesting it to allot a small part of the plot for a road. It is difficult for us to access the main road during emergencies. Ambulances or big vehicles cannot come in,” says D Sudharshan, a resident.

BU has not been encouraging of residents’ demand. During the demolition, when a resident requested Mylarappa to let them use the plot as thoroughfare, he had refused. Residents are hoping that the government may favour them.⊕

1500 tonnes less waste to be sent out of Bengaluru

Many politicians, industry, schools and hospitals made serious commitments at the recent Wake up Cleanup event. So what will make things different this time?

This week’s scan of Kannada newspapers have a number of reports from students selling their MD seats for money to wives canvassing for their husbands for the election and so on.