BBMP has created an Action Plan on waste management for the next 1.5 years. It will submit the plan in High Court in a hearing on November 6th. HC has been hearing two PILs that are asking for BBMP to dispose of solid waste properly. Two parties – an Indiranagar resident named Kavitha Shankar, and an advocate G R Mohan – had filed separate cases in HC. The two cases have clubbed together by the Court.

In these cases, last month the court had directed BBMP to collect segregated waste, to put realistic penalties on citizens who do not segregate waste and also on garbage contractors who violate terms. 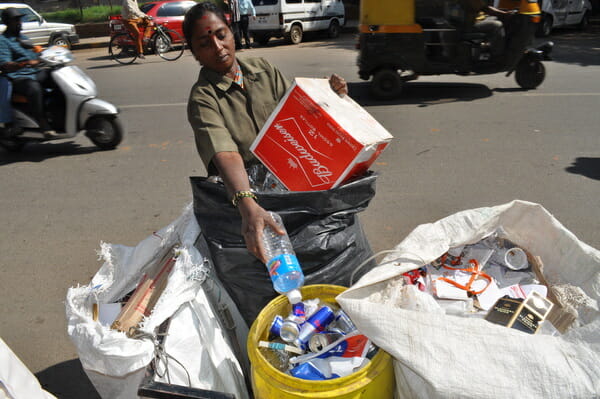 BBMP says that this plan is only an outline, and that a detailed study is needed for its implementation. "The location of landfills and processing centres, their capacity, technology etc., have to be identified. We plan to outsource the study to some consultancy," says Salma K Fahim, Additional Commissioner (SWM) at BBMP.

For the first step of its plan, BBMP plans to hold IEC (Information, Education and Communication) campaigns by itself among public. These will go on till January 1st. Training pourakarmikas and BBMP officers (health inspectors, SWM department officers etc) will be done by SIUD (State Institute for Urban Development) and AIILSG (All India Institute of Local Self Governance). These will also go on till January end. Bulk generators like apartments and hotels will also be trained.

In the second phase, it will be made compulsory for all bulk generators – including apartments – to set up their own waste processing units. BBMP plans to notify new rules under the KMC Act, mandating this.

It also plans to set up its own decentralised compost units by December 2013, with support from composting experts at BARC (Baba Atomic Research Centre). Location for the compost units will be decided in the next three months in a phased manner. There will be nodal BBMP officers in each ward, in charge of the units.

"We want to set up wet waste processing units in each ward, similar to our plans of dry waste collection centres. But there may be constraints regarding space, capacity etc. Waste from markets are BBMP’s responsibility; so in such areas, we will have to set up the units anyway," says Salma.

BBMP claims that locations for dry waste collection centres have been identified in all wards already. Rag pickers will be employed in these centres – they are being issued identity cards and allocated different centres. These centres will segregate dry waste, and send useful materials for recycling and inert waste to landfills/incinerators.

Individual houses will be given information on setting up their own small composting units or biogas convertors. RWAs and other local associations will be encouraged to set up common units in their localities. BBMP ward nodal officers will support groups and houses in building and maintaining the units. Setting up units is not compulsory for anyone other than bulk generators though.

The third phase – setting up centralised processing units and landfills – is expected to be completed in 12-18 months. Appropriate technologies for the processing units will be decided with the help of Biofuel Board, KSPCB and KREDL. Once the tenders are finalised, it will take 12 months for the plants to be built. By December 2013, all of these are expected to start functioning. By then, landfills will be set up in a new location for inert waste that cannot be incinerated.

H C Ananthswamy, Chief Engineer (SWM), says that a couple of companies have already expressed interest in setting up the centres, and that their technology and capacity is still being inspected. "The proposals include biomethanisation, conversion of waste to energy, ordinary compost units etc. The capacity is also varied – one proposal is only for processing 500 tonnes of waste. The city generates some 3000 tonnes overall. So we are looking at different options," he says.

Salma says that though the plants will start functioning by December 2013, their capacity can be increased gradually only. "Hence it will take some more months after December for them to run in full capacity," she says.

Government has already identified 12-15 abandoned quarry pits around the city as land for processing centres-landfills. But these areas are unsuitable for landfills, and hence nothing has been decided yet, says Ananthswamy.

As of now, the Mavallipura landfill owned by Ramky Enviro Engineers Ltd (REEL) is continuing operations until the waste piled up there is processed completely. There are no discussions currently in SWM department on whether REEL would be stopped from bidding in future tenders. "The problem was systemic; so there is no point in blaming companies alone. Landfills were given more waste than they could handle. Anyway, we have not started thinking about the tender process as land itself is unavailable now," says Ananthswamy, who had joined the SWM department recently.

He says that the conditions for setting up a landfill are stringent. They are defined in the Municipal Solid Waste Rules, 2000, and has such conditions as, landfills should be 1 km away from human habitation. "Where can we find such land in the city now? We may have to make some compromise. We are looking at multiple options to decide on this," Ananthswamy says.

In the meantime, High Court will be informed of progress of the plan every month. ⊕

Revised Master Plan-2031: Revisions only – neither mastery nor planning?

What does revised master plan have in it? Is it progressive or just an extension of the old plan? Here’s a curation of views on RMP 2031.

“Everybody wants a young representative. It is time for change.”

Krishna Byregowda says he is young and experienced. With two terms as an MLA, this 36 year old now aims to win against the incumbent, four term MP, BJP’s Ananth Kumar.