Jay Zende, a 41 year old Maharashtrian from Mumbai, made Bangalore his home, eight years ago and started a new venture ‘BooksTALK’. He along with the co-founder Jayashree Mantri Easwaran, both hailing from different backgrounds, came up with the concept of making books talk, early last year. These books are read by actors and sometimes even the authors, instead of voice-over artistes, to make the listening experience better.  Zende talks to Citizen Matters about his venture, city, and how he has been ‘Koramangala’ed since the time he settled here. 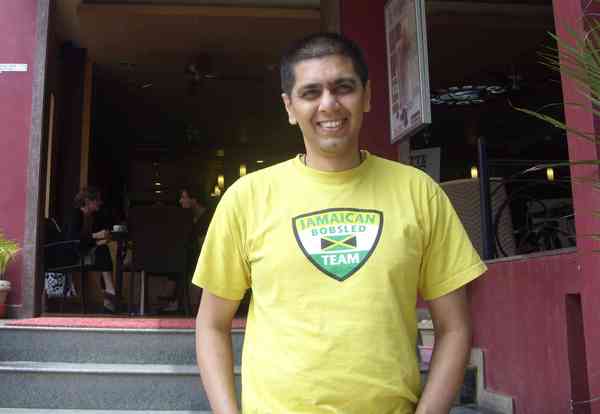 How did you come up with the idea of BooksTALK?

My colleague Jayashree and I have a very corporate background. I’ve done my engineering and MBA. What brought us together to open booksTALK is our love for books. What we realised that there are very few people who actually read but there are lot of people who want to get things that are in the books. So if you think about it, what you get from a book usually is some experience, data or who did what, where, etc.

And in these times people are so busy with their work and don’t have time to read, we thought why not come up with a product where people can get the all they want while not having to shell out extra time for it? People spend so much time in traffic on the way to work, while exercising, etc., So we came up with this idea of hearing books. You can put it in a pen drive, CD player or even MP3 player and keep listening to it while doing anything.
How many titles have you translated into audio yet? And which are the successful ones?

So far we have translated around 30 titles including English, Kannada and Bengali. I would say Kannada and Bengali book CDs are more popular and more people what to read regional literature in any form but are not able to. So they buy CDs and hear it out.

The reason we choose Kannada and Bengali languages is fairly simple. We are in Bangalore so Kannada would be the most used language, and then the biggest diaspora language – Bengali. So these books are more popular and sell much more than English books when compared.

What is the approximate cost to convert a book into audio?

The cost completely varies depending on the book you want to translate. From a lakh to several lakhs. It depends on the actor you are choosing for recording and the volume of the books. Some actors ask for a hefty price while some, moderate. But we sell these CDs at the price of the original books.

What are the challenges you faced as a startup company?

Well, as a startup, first of all we had to build credibility and convince people about the concept. A lot of people told us that "You are challenging the traditional book-reading with simply listening to it. How can you do that?" So we had to convince people that we are not against book reading at all.

We are simplifying the books for people who really want to read books but don’t have the time for it. The acceptance of this concept with people was the most important part. But now people have started accepting it.

How has the response been?

Yes it’s been 18 months now since we started. The response has been very good so far. People have started accepting books in audio form. The drive from work, back home was very tedious in the traffic earlier. But now people wait to get into their cars so they can start hearing their favourite books. While jogging, people used to keep tabs on the rounds they take – 3 more to go, 2 more to go and so on. Now they don’t even realise how much they exercise while engrossed in listening.

And the most important part is, the stores have started giving space for the book CDs. Earlier when we approached them, they were not sure of the concept and how it would do. But now, places like Crosswords, Sapna and Landmark have started keeping special racks for these CDs. So people are accepting this concept and the response has been quite good.

Who forms the majority of your buyers? Children, youngsters or the elderly?

The majority of buyers are the office goers and urban professionals from the age group of 20 to 45. These people travel and exercise the most and are also in search of inspiration, information and entertainment – three things they look out for, the most.

Koramangala’ed: I have been living in Koramangala since the time I settled here. So I think I have been ‘Koramangala’ed now. I don’t think I want to stay at any other place. There are a few things, I feel, are required in Koramangala and may do really good as business models. I really like the concept that Atta Galatta has come up with. Combining cafe, activity center and book shop. Other than that, I think we should have some play areas for children in Koramangala. Other than a park nearby, there are rarely any options for children to play. Also there are no concert places at all here. There should be some place where small bands can come and play music every now and then. And definitely we need a good sandwich joint.

Where do you see BooksTALK five years from now?

We want to see it running (laughs). Ok so seriously speaking, we want to add a lot more titles to the list and a few more regional languages too.

What strategy have you planned to market booksTALK to reach to a larger audience?

We are planning to approach offices, malls and supermarkets. The plan is to let as many people know about this concept and its advantages. Though now people are recommending us titles and spreading the word, we are also going to offices and translating their documents to make it interesting and simpler for employees to understand.

So people are already becoming aware of it but there a lot to do.

Do you have to obtain permissions from copyright owners for these? What are the challenges?

The procedure is very simple. All we have to do is obtain the rights. But the only variation is, the time it takes for various books. Sometimes, we just approach and walk out with the rights and sometimes, it takes months together to take the procedure (of obtaining rights) forward.⊕

They danced all day

May 9, 2012 Gaana Srinivas and Maitreyi Ananth

Alliance Francaise celebrated world dance day by having performances for 12 hours straight. It was fun time for the performers and the audience.

From being a person who had to face societal opposition, to the one who gets Rajyotsava award for her activism, she has come a long way. Here’s an interview that throws light into Akkai Padmashali’s life and thoughts.

Whether it is 500K, 500C or 500D, you’ll know only when the bus is close by and it won’t stop unless you signal the driver. This means you flag down every bus to look at its number and then wave the angry driver along.