Vaishnavi Vittal, former staff journalist at Citizen Matters, has won the Laadli Media Award for the best Web Investigative report – "Government ignores us because we aren’t educated and rich".   Citizen Matters ran the article in July 2010.

Population First, with the support of the UNFPA announced the winners of The Laadli Media Awards for Gender Sensitivity (Southern Region) 2011-12. The jury, which included highly esteemed members of the media, selected the winners from around 179 entries received from across southern India, comprising Kerala, Andhra Pradesh, Karnataka, Tamil Nadu, Andaman & Nicobar, Lakshwadeep and Puducherry. 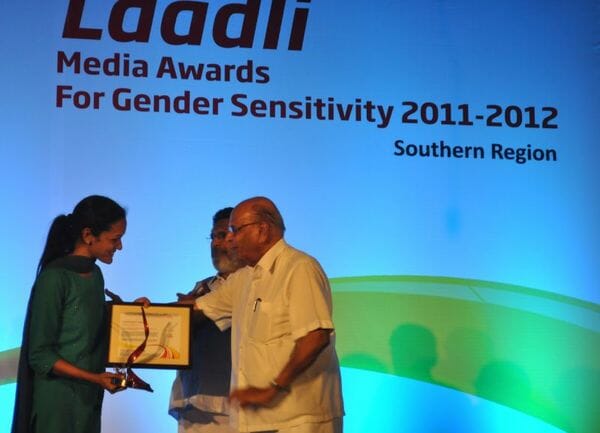 Vaishnavi Vittal recieved the award in the category of Web Investigative Report for Government ignores us because we aren’t educated and rich.

The Laadli Media Awards for Gender Sensitivity highlight, acknowledge and celebrate the commendable efforts by various media at providing gender-just perspectives, portrayals and analysis. It aims to provide the media with a ‘gender lens’ for gender-sensitive reporting or advertising and promote gender sensitivity as an important professional value among the media persons. Launched in March 2007 in Mumbai, the focus of the awards was on mainstreaming gender into media as media has tremendous impact on moulding the mindsets of people.

Vaishnavi’s report was part of a series reporting on low-income citizens in Bengaluru, especially women, their aspirations, and their assessment of politics and government. "The government has ignored the poor because they are busy pleasing the rich", two teenage girls in Ulsoor told her for the story, referring to massive spending for road and transportation infrastructure in Bengaluru, and yet very little being done for the poor.

Upon receiving this award, Vaishnavi says, "As a journalist with just over four years of experience, an award like this is a motivator and gives a boost to someone who is still learning. I would like to thank Population First for recognising this effort. It definitely makes me want to do better work, especially focusing on gender issues."

Vaishnavi believes that the problem lies in people not talking much about this subject. "We read about it and write about it. But this is an area that needs to be given top priority and spoken about all the time," she adds.

Revathi Asokan, Programme manager at Population First, says, "We are happy that Vaishnavi is the recipient of our Laadli media Awards. It is  people like her who write on gender issues and create awareness that helps the cause of girl child and encourage others too to take up this cause."

Ignoring warnings of a second wave left Bengaluru exposed to a COVID storm. But systems being set up now could prepare us better for a third wave.

Dust chokes residents living on this road in Whitefield. Children suffer the most.

A guide to Bangalore’s civic agencies

An introduction to the various civic agencies and parastatals responsible for Bengaluru: BBMP, BDA, BMRDA, BIAAPA, LDA, BESCOM, BWSSB and more. Who does what?