Brijesh Kumar, Chief Conservator of Forests, BBMP said yesterday that his agenda was to work towards a larger common goal in the city, balancing environment with the need for development.

Speaking at the inauguration of ‘Nature in the City’, a series of events centred around Biodiversity in Bangalore, he highlighted how BBMP had realised the need for an office to support the many lakes, parks and urban gardens under its care. He likened Bangalore growth to an animal once chicken-sized now grown to goat-size, but retains its chicken-sized arteries, he nevertheless reiterated his commitment to the environment. The event was held on Thursday October 5th at Jaaga, KH Road.

‘Nature in the City’ was jointly organised by Ashoka Trust for Research in Ecology and the Environment (ATREE), the Indian National Trust for Art and Cultural Heritage (INTACH) Bangalore, in partnership with Citizen Matters newsmagazine and photography collective Redframes.

Later Dr Harini Nagendra, Ramanujam Fellow, ATREE, spoke on ‘Nature in the City: How people shape, and are shaped by biodiversity in Bangalore’.

Harini discussed ATREE’s research on urban biodiversity and lakes in Bangalore. She described the impact that different types of land use in Bangalore had on biodiversity, and how these are shaped by human preferences and design, often changing over time. For instance, street trees in Bangalore have much greater variety in species compared to trees in many Western cities, but we are losing much of this biodiversity over time, as the largest trees are getting cut down on wide roads across Bangalore.

Older parks are much more wooded, consuming less water and requiring less pesticides and fertilisers compared to the more recent, intensively landscaped new parks in Bangalore. Traditional home gardens tend to have more trees and flowering species, while apartments prefer a landscaped appearance with more palms and fewer trees. All of these changes lead to decreasing support for urban wildlife, such as sparrows, frogs and butterflies. She also described how older institutions such as churches, cemeteries and temples act as refuges for heritage trees in Bangalore. 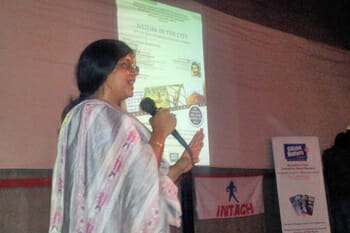 Dr Harini nagendra at the talk at ‘Nature in the city’ on now at Jaaga. Pic: meera

Interestingly, even traditionally underprivileged slum areas show a high affinity for nature – although they are not able to plant many trees due to lack of space, they use all sorts of innovative material to grow plants, including used battery cans, paint tins and disused cooking vessels.

Bangalore thus represents a city of contrasts, where development is leading to loss of green spaces, but active citizen movements, coupled with a close affinity for nature in the city, acts as a hope for conservation.

These events are a curtain raiser to the 11th Conference of the Parties (COP), one of the most important international conferences on the UN’s Convention of Biodiversity, being held in Hyderabad from October 8th-19th. The theme for COP11 is Urban Biodiversity.

At the Cities for Life Summit at COP11, during October 15th and 16th, a pamphlet will be released on "Urbanisation, Ecosystems and Biodiversity: Assessments of India and Bangalore". This important document, providing one of the first large scale assessments of nature and biodiversity in Indian cities, will be very important for policy and planning for sustainable urbanisation in India.

Other events in the series include a talk by Dr Madhusudan Katti, Associate Professor California State University, Fresno on 5th October, on ‘What Concrete Jungle? Tales of Wildlife from an Urban Planet’.

There is an ongoing photo exhibition on Nature in the City, at Jaaga, on October 4th and 5th. On Sunday, 7th October, there will be two outdoor events. Award-winning illustrator Sangeetha Kadur and Shilpashree of Greenscraps will conduct a Nature Journaling workshop at Puttenahalli Lake, J.P. Nagar. S Karthikeyan, Chief Naturalist at Jungle Lodges and Resorts, Bangalore, will take participants on a nature walk at Cubbon Park.

The events have been sponsored by USAID, National Geographic Society, and Swedish International Development Agency.

More than 40 people on cycles rode from Cubbon Park to Lalbagh and back. The event aimed at raising awareness and gathering support from Bengaluru citizens to raise their voices against the use of pesticides and chemicals in the food.

For those Bangaloreans who want to go to Kerala this Onam season!

Waiting to get away from Bengaluru to God’s own country this Onam season? Here’s what might interest you.