Bengaluru’s apartments are yet again at the receiving end of civic agencies’ policies. This time over Waste management. While BBMP is pushing the pedal to ensure solid waste is segregated, it says it will not collect garbage from apartments.

Some time back, large apartments were asked to set up their own Sewage Treatment Plants (STPs) since BWSSB did not have the capacity or coverage to process their sewage. Some were suddenly slapped steep fines last year by KSPCB because of an obscure rule.

Now BBMP has ordered that apartments should have their own garbage processing facilities by December 1st. Within two months, all apartments with more than 10 units should segregate and process their own waste. On the other hand, independent houses only have to segregate their waste and leave it for BBMP pourakarmikas to collect. 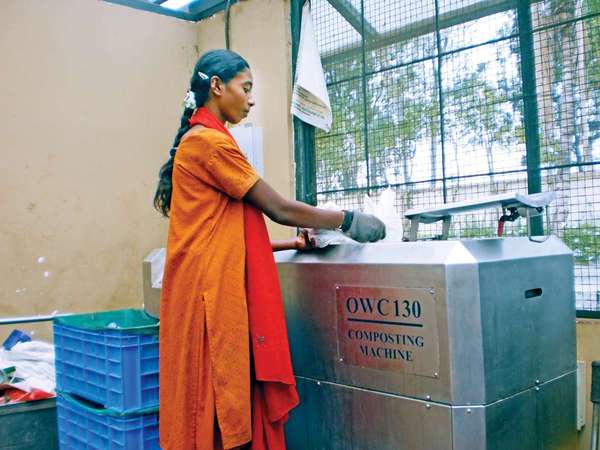 Until the deadline, BBMP will collect segregated waste from apartments at the approximate cost of Rs 1 per kg of waste – there is no such cost for independent houses. BBMP has done this by bracketing apartments along with markets, tech parks, hotels etc., terming them all ‘bulk generators’.

Many apartment associations agree that processing their own garbage is a good concept, but point out the practical difficulties. "Composting and biogas plants cost lakhs, and we don’t have even a year’s time to set them up. This is so abrupt," says Rajesh Rao of Trinity Acres and Woods apartment in Bellandur.

Other concerns are about lack of space for setting up the units, managing stench, distributing excess compost generated, etc. Apartment owners’ associations also say that they already pay BBMP a garbage cess, and should not be asked to spend more than others. BBMP has not been engaging directly with the communities either, which has caused more confusion.

Sandhya Narayan, member of the civic group Solid Waste Management Round Table (SWMRT), says that apartments with 25-100 units can set up composting units that cost maximum of Rs 1.5 – 2 lakhs. For apartments with less than 25 units, waste can be processed at the household level itself, using individual or shared compost khambas.

Large apartments will have to shell out much more. For apartments with over 800 units, organic waste converters are ideal. They can process about a tonne of garbage daily, but cost about Rs 15 lakh to be set up.

A mid-size apartment (between 100-800 units) may have to set up multiple composting units, or the more expensive waste converter. Biogas plants are also relatively costly. "There are very few examples of well-functioning biogas plants in India; there is not much expertise on this area yet," says Sandhya.

Currently there are a few city apartments that process their own garbage and even earn revenue from it. Diamond District in Old Airport Road, Godrej Woodsman apartment in Hebbal, and Mantri Tranquil in Kanakpura Road are among them.

BBMP had made the new rule referring to Sections 256 and 260 of KMC (Karnataka Municipal Corporation) Act, 1976. Its notice also said that builders of big apartments had signed the agreement saying that waste processing will be facilitated within the complex, while getting building permissions.

But residents of some city apartments say the Palike is overinterpreting the provisions of the law. It was only from 2006 that the condition about waste processing facilities was included in Occupancy Certificates of apartments, they say.

An RWA member of Sobha Aquamarine apartment in Bellandur, says on condition of anonymity, "BBMP’s notice is illegal; it cannot stop collecting waste from apartments." Representing RWAs of some apartments in Bellandur, this resident had raised his concerns at the state Pollution Control Board (KSPCB), which has approved BBMP’s new rules.

The RWA member says that apartments processing their own garbage is a long-term solution, and is necessary. "Segregation is in our own interest. But BBMP should not hold a gun to our head to make this happen. It has to recognise that apartments cannot be forced to process waste or classified as ‘bulk generators’. There should be more awareness campaigns as well," he says.

KSPCB Chairman Dr Vaman Acharya has also agreed with residents’ arguments, that BBMP cannot stop collecting garbage, as per KMC Act and Municipal Solid Waste Management Rules, 2000. Taking a personal interest in the matter, Acharya has agreed to guide apartments across the city on setting up cost-effective waste processing plants, such as to have clusters of apartments jointly set them up. Acharya himself owns a garbage processing business.

BBMP Commissioner Rajneesh Goel is not being categorical for the moment, "We are still collecting garbage, we have not stopped doing that. Even now, apartments are not even segregating the waste, forget processing it. Apartments can get compost or biofuel as return from waste processing; there will be no losses."

On whether he will re-consider collecting segregated waste from apartments without insisting on processing, Goel says, "In a month we will have to see what happens, and decide what to do."

Look out for the next in the series on Citizen Matters

20 corporate teams and clubs battle it out for the tennis championship. The matches are held over the weekend.